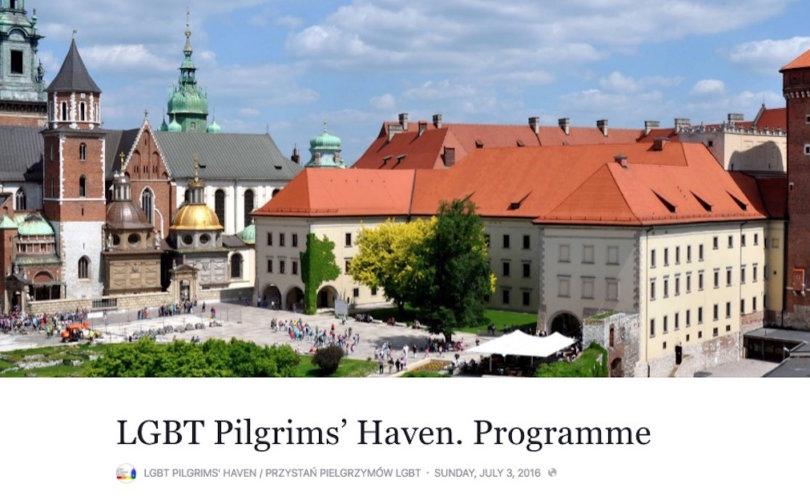 KRAKOW, Poland, July 19, 2016 (LifeSiteNews) — LGBT activists in Poland will advocate their issues in a shadow outreach at this year’s World Youth Day.

Heads of the Warsaw-based “Faith And Rainbow LGBT” group hope to reach thousands of gay, lesbian and transgender individuals at the Catholic Church’s triennial international event in Krakow, and to do so they have set up an “LGBT Pilgrims Haven.”

“We want to create a space in which they will feel safe and where they will find answers to issues facing them,” said Misza Czerniak, one of the organizers.

The “LGBT Pilgrims Haven” will take place in a cafe in Krakow's Kazimierz Jewish quarter.

World Youth Day runs July 25-31 and is expected to draw about two million people to the city.

This year’s theme is “Blessed are the merciful, for they shall obtain mercy” from Matthew 5:7, the fifth of the eight Beatitudes imparted by Christ in the Sermon on the Mount. World Youth Day includes Masses, catechetical sessions, and youth festivals. Pope Francis is scheduled to take part in some of the various events beginning on the third day continuing through the gathering’s end.

World Youth Day also includes a vocations center to help the youth and young adults in attendance to discern what God expects from them in their lives and to become familiar with the Catholic Church’s spiritual richness.

Among the activists taking part in the Polish LGBT event alongside World Youth Day is Rev. Jim Mulcahy, a U.S.-born Jesuit, according to the group’s information, who “is an experienced pastor and spiritual father of many LGBT believers.” He is currently a pastor of the Metropolitan Community Church, lives in Ukraine, and “is a special ecumenical guest of our Haven.”

Also presenting at the LGBT event will be Brendan Fay, chairman of the Lavender and Green Alliance, the second homosexual activist group to march in the New York City Saint Patrick’s Day Parade in March this year after [email protected] was given the go-ahead to march in the 2015 parade.

The “Faith And Rainbow LGBT” group’s effort is the first reported outside event in conflict with the Church’s teaching scheduled during this year’s World Youth Day in Poland, a largely Catholic country.

The Church’s teaching states that homosexual acts are intrinsically disordered, and contrary to the natural law. It further states that while individuals experiencing homosexual tendencies are to be accepted with respect, compassion, and sensitivity, they are called to chastity.

Regarding transgenderism, the Catholic Church teaches that God created humans as male and female and that the Lord does not make mistakes. And according to the Catechism, “Everyone, man and woman, should acknowledge and accept his sexual identity.”

Dissenting organizations have attempted to use World Youth Day and other international Catholic Church gatherings to subvert Catholic teaching in the past.

LGBT activists also converged on both Synods on the Family called by Pope Francis in in hopes of advancing their cause, as well as organizing in Philadelphia last fall during the Holy Father’s appearance at the World Meeting of Families.

U.S.-based pro-abortion group “Catholics for Choice” tried to run condom advertisements during World Youth Day in 2011, and the group had distributed condoms to World Youth Day attendees earlier in Toronto and Cologne.

Krakow’s Cardinal Stanisław Dziwisz, head of the archdiocese organizing World Youth Day, said earlier this spring that he hoped the event would help spark a religious and moral revival in Europe.