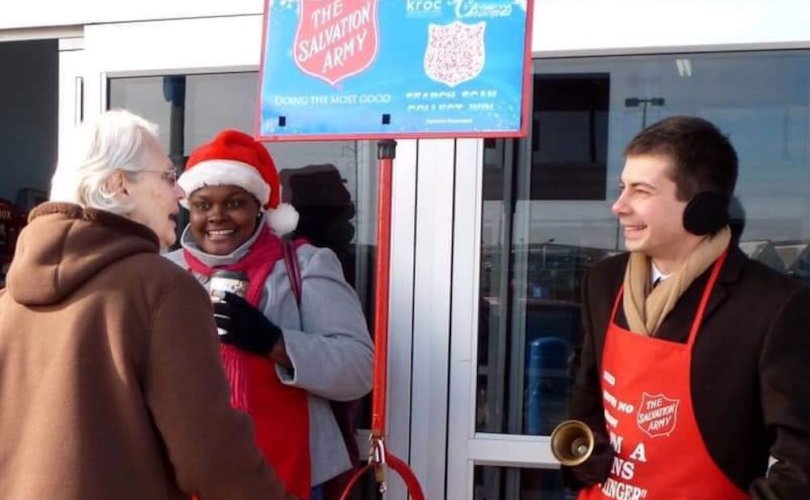 December 5, 2019 (LifeSiteNews) — Democratic presidential candidate and mayor of South Bend, Indiana Pete Buttigieg, an outspoken homosexual who calls himself “married” to a man, has found himself under fire from the left for his past volunteer work for the “anti-gay” Salvation Army.

On December 3, the LGBT website Out reported that on multiple occasions in previous years, Buttigieg volunteered his time as a bell-ringer for the religious denomination, known for its ubiquitous charity operations — which Out’s Rose Dommu wrote “would be super nice of Buttigieg if the Salvation Army didn’t have a well-documented history of discriminating against LGBTQ+ people in need.” Instead, he “should have supported an organization that was created to cater to the needs of queer people.”

Despite the Salvation Army’s compromises with the Left (including its moderate stance on abortion and recently insisting it has “evolved” on finding “ways to help LGBTQ+ individuals feel safe and cared for”), the charitable arm of the organization has been a target of left-wing scorn for holding to a biblical understanding of sexuality and opposing same-sex “marriage.”

Condemnation of Buttigieg’s association with the Salvation Army quickly spread across social media, with Alliance for Justice spokesman Zack Ford joining in:

I know the photos are two years old, but still, I can't help but wonder if Mayor Pete just looks at what LGBTQ activists have been working on for years and then chooses to spite it (e.g. Salvation Army, Chick-fil-A, queer media in general, etc.). https://t.co/zSYzlRLrOX

Hey @PeteButtigieg you do realize the Salvation Army would gladly shut out the homeless to retain their “right” to discriminate against you yeah?
Like they have before in San Francisco & New York?
But sure, get your photo op in.
������

I still vote we call the gay version of an Uncle Tom an Auntie Em. May be in the family, but no friend of Dorothy. [also sold out Toto]

This could only be worse if he was holding a Chick-fil-a in front of a Hobby Lobby. https://t.co/g0CbX9Z4xi

Buttigieg’s campaign has so far declined to respond to the criticism, NBC News reports.

The scandal is ironic for Buttigieg. While the mayor has not been as strident as other Democrats on the formerly conservative food chain Chick-fil-A, he has joined left-wing fervor against Christian conservatives in most other respects, from advocating federal laws that force private entities to embrace same-sex unions and trarnsgenderism to claiming that religious liberty protections on LGBT issues are “abusive toward the idea of faith.”

Buttigieg currently ranks fourth in RealClearPolitics’s polling average of the Democrat primary, with 11.4% of the vote.