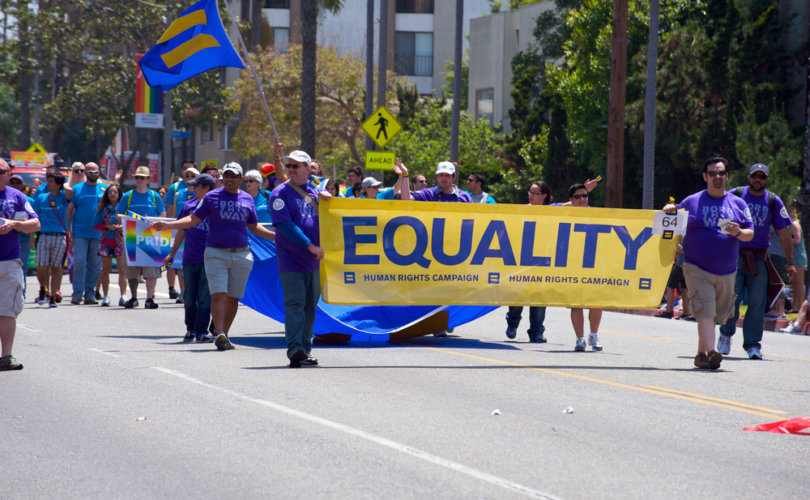 UNITED STATES, April 25, 2018 (LifeSiteNews) – LGBT activists’ efforts to rally economic and media pressure against states that resist the homosexual and transgender agenda are bearing fruit, according to a recent review.

Republicans currently control 33 governorships and 31 state legislatures. But out of approximately 120 state-level bills labeled “anti-LGBT” by opponents, none have passed despite most legislative sessions nearing their end, the Associated Press reports.

These measures include allowing adoption agencies to place children only in homes with a mother and father, upholding requirements that people use the restroom corresponding to their biological sex, and more.

The pro-homosexual lobbying group Human Rights Campaign (HRC) says that out of all the legislation it deems “anti-LGBTQ” proposed in 2017, less than 10% became law. By contrast, more than a dozen states have enacted bans on treatment for minors who experience unwanted same-sex attraction or gender confusion.

It appears that this trend is not due to an inevitable culture shift or substantive debate on the legislation’s merits, but because massively funded left-wing activists have successfully pressured various economic interests to boycott states that pursue conservative policies.

Last year, the National College Athletic Association (NCAA) and National Basketball Association (NBA) threatened to keep future tournaments and championship games out of North Carolina over the state’s transgender bathroom law. Stung by the defeat of Republican Gov. Pat McCrory and fearful of estimates that defending the law would cost as much as $3.76 billion in revenue, the Republican legislature agreed to repeal it.

The “leaders of our State have let the people of North Carolina down,” North Carolina Values Coalition executive director Tami Fitzgerald lamented at the time. “The truth remains, no basketball game, corporation, or entertainment event is worth even one little girl losing her privacy and dignity to a boy in the locker room, or being harmed or frightened in a bathroom.”

While conservative lawmakers continue to propose such bills, HRC legislative specialist Cathryn Oakley told the Washington Post that their GOP colleagues and leaders are “losing their appetite” to risk political capital fighting for them.

Joseph Grabowski, Director of Communications for the National Organization for Marriage (NOM), granted that the current situation was bleak, but maintained that LGBT activists’ reliance on such methods was a sign that they still lacked the popular support to defeat such laws through the normal democratic process.

“If the LGBT lobby had large grassroots, organic support on their side, then they wouldn’t need to pursue these large entities to support their cause,” he told LifeSiteNews. “But they know that they don’t have the popular support that our cause enjoys. And that’s why they go after the corporate bullies to make their case for them in a way that they couldn’t do if they were leaving it up to the people.”

“This story has a little bit of a 'gay astro-turf' feel to it,” said Peter LaBarbera, president of Americans For Truth and assistant director at MassResistance. “They gay lobby is using well-funded projects like this to sap the will of Christians and moral citizens and get us to give up. They browbeat corporations into becoming LGBTQ 'change agents; now they're trying to convince Americans that the liberty-crushing LGBTQ agenda cannot be stopped. But we can stop it!”

“Gay activists penetrate institutions and destroy them. That's what they do,” he continued. “But we must not be intimidated: everyday people are waking up to the totalitarian, anti-Christian schemes of Big Gay and Big Trans–and their evil campaign to indoctrinate our kids, even into embracing extreme gender confusion.”

Another factor may be the rise of libertarianism in conservative and Republican circles over the past several years. Among the GOP’s most influential donors are the Koch brothers' network and the US Chamber of Commerce. David Koch endorsed the successful 2015 effort to mandate same-sex “marriage” nationwide.

While the Chamber of Commerce has been officially neutral on most LGBT issues, conservative and pro-family activists have long accused it of sacrificing social issues for business interests. In 2013, Tea Party activists blamed conservative gubernatorial candidate Ken Cuccinelli’s loss in Virginia partially on the chamber’s unwillingness to spend any money in the race.

Regardless of the root cause, conservatives urged opponents of the LGBT agenda to press on.

While “a lot of people have been cowed into silence” by the Supreme Court declaring a constitutional right to same-sex “marriage” in 2015, NOM’s Grabowski predicted that the Supreme Court’s upcoming ruling the Masterpiece Cakeshop case could be a turning point in the other direction. The case concerns whether Colorado baker Jack Phillips can be forced to provide same-sex “wedding” cakes despite his beliefs.

“If the Supreme Court does rule in favor of broader religious protections and protections of conscience for people who believe in traditional marriage,” Grabowski said, “we think it will give a lot of hope to people that this is still an issue that we can disagree on and have a robust public discourse about rather than just being intimidated into silence.”

“Our kids' future is at stake,” MassResistance’s LaBarbera declared. “We must never be intimidated into giving up in the battle for truth–because it's God's moral truth, not ours.”

‘You’re going to get yourself into trouble’ for rejecting LGBT agenda: CNN host to Kenyan President

LGBT lobby group targets VP Pence: He’s ‘one of the greatest threats’ to our agenda

A 20-year anniversary of judicial LGBT tyranny in Canada