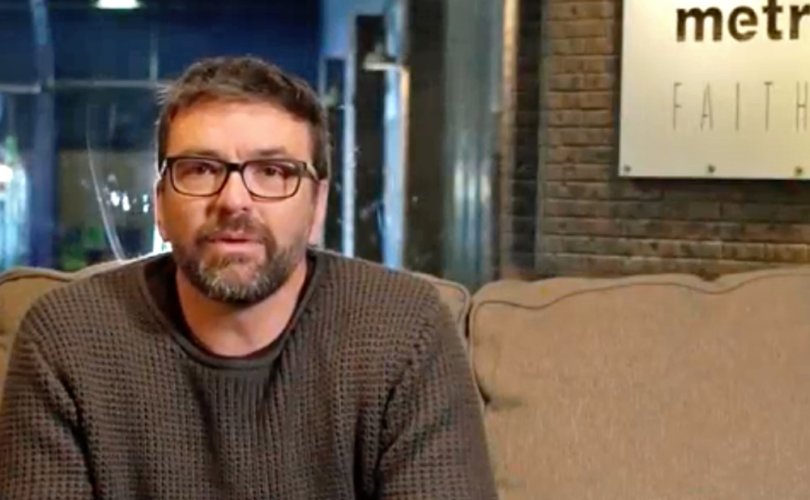 RIVERVIEW, Michigan, February 28, 2018 (LifeSiteNews) – A pastor of a Detroit-area church along with his family have received death threats, arson threats, and bomb threats from LGBT advocates after advertising a Bible-based workshop for teenage girls struggling with their sexual identity.

“A whole bunch of people have come up with this idea that we are offering some sort of conversion-therapy workshop,” Metro City Church Pastor Jeremy Schossau explained on a Feb. 5 YouTube video about the backlash to his church's program titled “Unashamed Identity.”

“As a result of that, we’ve had an unbelievable backlash on social media filled with hate and vulgarity,” Schossau continued.

At one point, the church was receiving as many as 40 voicemail messages a minute from critics of the program.

The pastor received messages on social media such as: “Kill yourself. We don’t want you here. ‘God’ can have your a**hole.”

“The vast majority are filled with vulgarity, hate, and threats of all kinds,” Schossau told the Detroit Metro Times about the thousands of angry complaints with “unbridled” hate and vitriol that the church has received about the workshop.

One man was charged by police after threatening, “Every member of the ANTIFA will show up ‘armed and ready.  This is not a joke.’”

The six-week workshop for girls 12-16 — which was canceled at the last minute due to a planned protest by LGBT advocates — was promoted as “a safe place for teenage girls to learn what the Bible teaches about sexuality.” FORGE Ministries designed it “for those struggling with the thoughts that they are Trans – Bi – Gay – or other.”

“Through thoughtful, relevant, and biblical counsel, we will help your girl be unashamed of her true sexual identity given to her by God at birth,” a social media posting about the workshop, which has since been taken down, stated.

“What we find incredibly odd is there is no seeking to understand what we are truly doing,” Pastor Schossau said.  “Only the assumption that we are practicing some sort of (forced) conversion therapy.”

He emphasized that participants come voluntarily, are not coerced in any way, are not shamed at all, and no one forces any girl’s decision.

Nevertheless, Democrat politicians sought to put a stop to the workshop.

State Rep. Darrin Camilleri (D-Brownstown Twp.) called for a government investigation into it and State Rep. Adam Zemke (D-Ann Arbor) introduced legislation to criminalize counseling anyone who has unwanted same-sex attractions toward heterosexuality.

Camilleri and Zemke also wrote Michigan Attorney General Bill Schuette “urging him to investigate FORGE Ministries and Metro City Church for a violation of the Michigan Consumer Protection Act.”  They charge that those entities may have committed “unfair, unconscionable or deceptive practices,” but they do not elaborate how.

Schossau insists that the workshop is not the politically-correct caricature of reparative therapy as judgmental or pushy.  “We want nothing to do with that,” he told WXYZ News.  “This (is) a place not for condemnation but for conversation.”

“People are acting like we are forcing people into our church office so that we can spit on them, beat them over the head with the Bible, judge them or shame them. Nothing is further from the truth,” said the pastor.

“These are folks who are seeking us out … Nobody is forcing them to be there,” he reiterated.  “We are about conversation but conversion is totally up to the person.”

“Virtually all of the thousands of emails assume that we are forcing and judging and hating people. Simply not true,” he wrote. “The hypocrisy of the gay community is so incredible because they are not seeking to understand and making totally wrong assumptions.”

Despite these assurances from the pastor, angry opposition to the workshop grew. The opposition was largely fueled with the help of mainstream media.  The Detroit Metro Times publicized a public protest outside the church.

Schossau pointed out the “hypocrisy” of the LGBT movement in a YouTube video.

“If they move toward the gay community, it is celebrated,” he noted.  “Why is it wrong for somebody…struggling and hurting…to call us, and if they move toward heterosexuality, we celebrate that?  Why is that wrong?  It is no different.”

The Family Research Council is defending Metro City Church. It started an online petition against state intimidation.  The petition, addressed to Reps. Camilleri and Zemke, accuses them of “attack(ing) the free speech rights and free exercise of religion by a local church congregation, in direct violation of the First Amendment.”

“For you to dictate what a local church must teach regarding its theology is totalitarian in nature, and is at the heart of what the Establishment Clause of the First Amendment was meant to prevent,” the petition states.

Over 22,000 people have signed the petition.