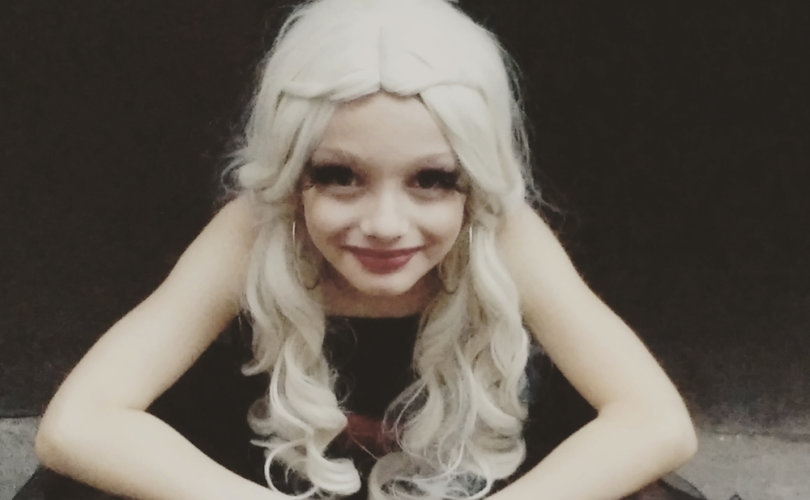 June 9, 2017 (LifeSiteNews) — The bawdy, homosexuality-infused world of female impersonators is celebrating an eight-year-old Montreal boy who performs as a “drag queen” under the stage name “Lactatia.” But pro-family critics say his parents and all adults who encourage the boy to participate in the lewd shows are guilty of “child abuse.”

Thanks to “gay” media, the cross-dressing boy, Nemis Quinn Mélançon-Golden, is becoming a social media star after appearing on stage in late May with vulgar drag queen “Bianca Del Rio” at the Montreal stop of the “Werq the World Tour.” Del Rio tells Nemis — wearing red eye-liner, lipstick, painted nails, a curly, blond wig and dressed in a black woman’s gown with sequins — that he is “[f—k—g] adorable.”

Like every other pro-family advocate shown the video of young Nemis in “drag,” Illinois Family Institute cultural writer Laurie Higgins was aghast at the specter of a young boy embracing the “drag queen” lifestyle, telling LifeSiteNews, “This is unambiguous and shameful child abuse. Through the ‘trans’ cult movement, evil is being promoted as good, and innocent women and children are the victims.”

Historically an important part of “gay” culture, drag shows are now a fixture of urban entertainment, attracting both homosexuals and straights.

In a “Best Kept Montreal” video (now approaching 700,000 views), Del Rio jokes about giving the boy “a shot” (of liquor) and calls him a “bitch,” applying the typical drag putdown-vernacular to the child. After “Lactatia” picks another drag queen as his favorite, Del Rio says, “Even though I'm not your favorite, you're my [f—k-n’] favorite.”

“Lactatia … I love the fact that you're here. What I love most about this is that your mom is here with you, supporting you,” says Del Rio, pointing to Nemis’ mother in the audience, as the crowd roars in approval.

In a follow-up video put out by “LGBT in the City,” Nemis’ mother is shown happily applying exaggerated feminine makeup to the boy’s face as they prepared for the Montreal drag show. His parents are fully supportive of Nevis’ dream to be a drag star.

In an interview with the parents, Best Kept Montreal writer Riley James gushes, “To see a family so in tune with their child’s inner superstar is something very special, we must take note. I was lucky enough to have a chance to speak with the up-and-coming drag star’s parents, and the love I felt in their words about Nemis and Lactatia is overwhelming!”

The parents’ comments begin: “When Nemis is out of character, he identifies as a boy and in drag as a girl. Drag for Nemis is about the performance, the character. When he’s Lactatia, becoming her character, he’s a girl with a penis.

“As far as gender roles go, we’ve gifted both of our children with the ideal that there’s nothing just for girls and nothing just for boys. He grew up wearing his sister’s hand me down princess costumes and fancy shoes while playing with monster trucks and riding a skateboard,” they said.

In the video, Nemis, who already owns five female wigs, confirms his parents’ account: “I've been getting into drag since I was seven, but literally I've been into wearing dresses and being into girls stuff since I was three.”

He gives an impromptu act for the camera, imitating the campy style of adult homosexual “drag queens” as he says, “I think that anyone can do what they want in life. It doesn't matter what anyone else thinks. … If you want to be a drag queen and your parents don't let you, you need new parents.” The words “YOU NEED NEW PARENTS” in capital letters appear on the screen as he talks.

“If you want to be a drag queen and your friends don't let you, you need new friends!” says the precocious boy, as “YOU NEED NEW FRIENDS” pops up on the video, which has soared to more than 36,000 YouTube views in just five days.

LGBT in the City describes the boy as follows: “Who said eight years old was too young to be a superstar!!!!!…[Nemis] has been taking dance classes for more than a year and today is performing in a dance competition. You go girl and show them how it's done.

“The parents are always with Lactatia in all public events when he performs in drag so don't worry people this kid is always in a safe and secure environment,” it states. “Lactatia you rock our world and you are a true inspiration for a lot of people !!!”

But family advocates including two former homosexuals said the drag queen world is about as far from a “safe and secure environment” as a child can get. They slammed the boy’s parents as recklessly endangering the boy and guiding him into a destructive future filled with perversion.

Quinlan, a former “gay” activist and founder and president of the Center for Garden State Families, said, “This child is already involved in homosexuality. He’s involved in all that is ‘gay,’ and his parents are blessing it.”

He said, “The Western world has surpassed Sodom” in its evil.

Another pro-family leader who came out of the homosexual lifestyle agreed.

“We are witnessing the LGBTQ+ community embrace child abuse by cultivating mental illness by promoting ‘drag’ in a child. It doesn’t take a rocket scientist to know this will eventually lead to sexual play,” said Stephen Black, an ex-“gay” and childhood sexual abuse victim himself who is now a Christian family man and the executive director of First Stone Ministries, based in Oklahoma City.

“Today we are seeing — truly, right before our eyes — a moral decline like we have never witnessed, a demented mindset that calls evil good, and good evil. The Bible predicted these days would come and we are surely in them,” Black told LifeSiteNews.

Higgins said, “Fifty years ago, parents who permitted a young son to attend drag queen events, let alone participate in them, would have justifiably lost custody of him.”

She noted the “sick, repellent irony” that just a couple of days ago Ontario passed a law that “would allow the government to confiscate children whose parents refuse to affirm their disordered desire and futile quest to be the opposite sex — while the parents of this little boy are celebrated for immersing him in a culture of adult perversion.”

In the starkest of contrasts, homosexual and pop-culture media are avidly promoting “Lactatia” — a drag name that Nemis said he and his 14-year-old sister Kashmyr came up with. He calls her his “Senior Drag Consultant.”

The homosexual news blog Towleroad reported with excitement on May 31 that the eight-year-old “stole the show” at the Montreal stop of the “Werq the World Tour.”

Towleroad founder and writer Andy Towle expressed no concern about corrupting the boy in his piece, which includes the video of adult drag queen Bianca Del Rio spewing profanity as she talks to the young boy, “You're [f–k—g] adorable.”

Similarly, “drag queen” icon RuPaul, creator of the LOGO show “RuPaul’s Drag Race,” promoted Lactatia via Twitter. In an interview with Gay Times, Nemis said that if he got a chance to meet RuPaul, “I would probably tell her that she is my idol and has inspired me to be a drag queen.” (RuPaul is a man, born RuPaul Andre Charles.)

Nemis’ parents, Jessica Mélançon and Coriander Golden, described themselves in the interview as “huge allies in this scene” of drag performing. They admit that “we’re not like most moms and dads.”

“Instead of Saturday morning soccer practice, we have Vogue classes. [“Voguing” is an extreme dance style popular in drag circles.] When we go clothes shopping, it’s equal parts black skinny jeans and skulls as it is sequins and tulle.”

Nemis’ parents say the boy “understands that a majority of [drag] Queens are gay.” They told Best Kept Montreal, “It’s something we’ve talked a lot about at length because he expressed his concern that people wouldn’t think he was a ‘real’ drag queen or take him seriously because he doesn’t feel like he’s gay.”

“Maybe he will [adopt a ‘gay’ identity] in the future? Who knows,” they said. “Luckily for him, he has his whole life to figure out that aspect of himself, but for the time being, he’s content to find heels in his size and own his [sh-t]!”

They said they are “hoping that Nemis inspires more parents to be unconditionally accepting of their children and inspires more kids to embrace themselves completely!”

But ex-“gay” Quinlan dismissed the idea that the boy’s parents truly are encouraging him to make his own choices.

“The early sexualization of any child is wrong, and illegal,” he said, noting that the parents are “intrinsically responsible” for the child.

“They’re not giving him any choice for the future. They’re telling the child what his future will be,” he said.

Noting the high degree of deviant sex, drugs and crude nastiness that is what the homosexual “drag scene is all about,” he said that beyond Nemis’ parents, every adult who is involved in promoting the eight-year-old boy as a “drag queen” is guilty of “child abuse and child endangerment.”

“Is there a sane person who identifies as LGBT who will come out and say, ‘This is wrong’?” Quinlan asked.

1
Dr. Robert Malone: Endless mRNA jabs are in the works as the CDC and FDA play ‘hide the data’
2
World Economic Forum adviser Yuval Harari is a Marxist who believes there is no truth, only power
3
REPLAY: LifeSite’s 25th Anniversary Gala
4
Open letter to Elizabeth Warren: Why do you campaign so strongly for the murder of the unborn?
5
New video highlights Canadian cricket farm amid ongoing push to switch out beef for bugs
Subscribe to Daily Headlines »