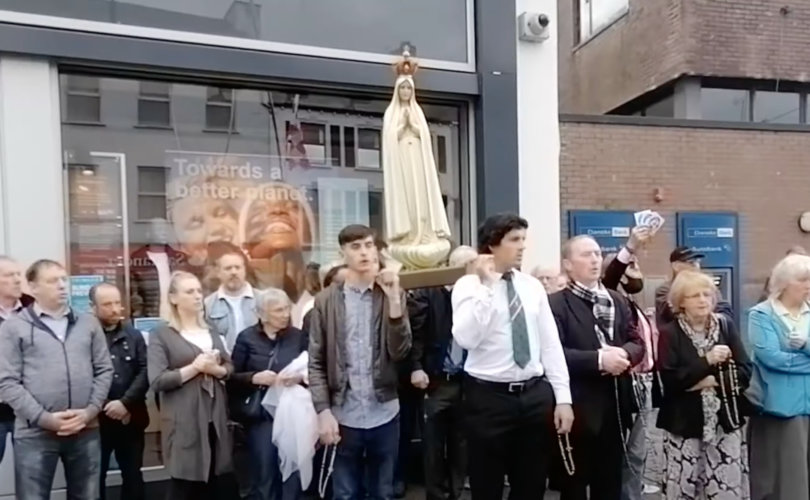 DUBLIN, Ireland (LifeSiteNews) — As Irish Catholics took to the streets once more to pray the rosary in reparation for a pro-homosexual “Pride” parade, they faced constant heckling and abusive language from the pro-LGBT crowd, including a shouted of “Hail Satan.”

The Irish Society for Christian Civilisation (ISFCC) took part in a public rosary rally in Omagh, Co. Tyrone, organized by local activist Gerry McGeough, to make reparation for the pro-LGBT “Pride” parade taking place that day in the town, September 25.

Bearing a statue of Our Lady of Fatima and praying the rosary aloud, the peaceful group was faced with abuse from the homosexual supporters from the outset.

“From the moment we arrived we were confronted with contempt and intolerance by a group of people who supported the ‘Pride’ parade,” said Rory O’Hanlon, a member of the ISFCC.

Walking through the town with the statue, the Catholics received a constant stream of verbal abuse from the LGBT supporters, and were accused of being “Nazi scum, thugs, f****ng disgrace,” and asked if they thought “the holocaust was holy.”

The supporters of the town’s first LGBT parade continued their attempts to disrupt the rosary, blowing sirens in the faces of those praying, pushing in front of the group, and waving placards with the caption, “Smash fascism! Fascists out.”

“Throughout the Rosary, we were heckled with sirens, whistles, foul language and worse. One man shouted blasphemies against Our Lady and another shouted ‘Hail Satan,’” said O’Hanlon.

Despite this opposition, the members of the rosary rally were undeterred and did not respond to the provocations of LGBT activists.

“We were not intimidated by this abusive behaviour, and we continued to calmly pray the Rosary,” declared O’Hanlon. “I would like to encourage Catholics around the world to not be intimidated by the left-wing tyranny that we are faced with everyday just for being Catholic, to get out there and stand up for their faith.”

Similar scenes had taken place the week prior, when the ISFCC held a rosary in reparation for a “Pride” parade in Cookstown. While the level of verbal abuse had been less, organizer Gerry McGeough was punched in the face while praying, and later suffered a heart attack as a result.

McGeough, 63, said that he “offered [it] up for the offense itself that has been given.”

Not put off by the attack, McGeough urged Catholics to take part in public prayer. “It’s time for us Catholics to stand up [and] not be afraid. Get out and pray! And be there. Go forward!”

Police subsequently arrested a 44-year-old woman on “suspicion of common assault,” who was later released pending a report. Law enforcement officers did not deem the assault to be a hate crime.

“Our ancestors endured dungeon, fire, and sword to keep the faith alive in this country. All we’re asking to do ourselves is to go out and pray a rosary,” said McGeough. “You may get punched in the face sometimes, but that’s nothing compared to being thrown in a bonfire.”

The ISFCC was created “to resist, in the realm of ideas, the atheistic, liberal, and socialist trends of our times and proudly affirm the positive values of Christian Civilization, through the dissemination of religious articles and Catholic literature, especially of the message of Fatima.”

Public acts of prayer are a key aspect of the ISFCC’s mission, and as such members have assisted the organizing of regular public rosary rallies in 12 counties.

“Central to our mission is the idea that the various crises threatening Irish society and the Church cannot be seen as separate and disjointed. Rather they originate from a single cause,” notes the ISFCC.

In the latest of such public rosary rallies across the country, the ISFCC joined Catholics in Derry, Northern Ireland, October 1, where “dozens” of men prayed the rosary on their knees in public.