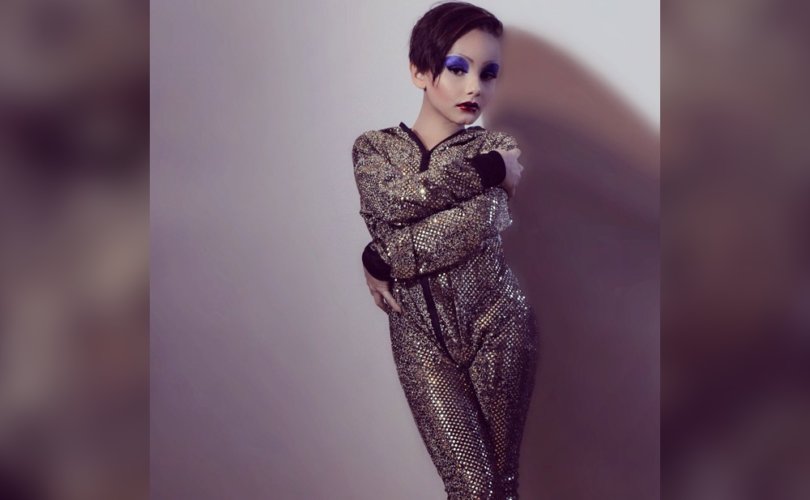 House of Mann, run by Brandon Hilton, is a Charlotte, North Carolina-based online shop that sells clothing and lingerie for drag queens and gay men. It uses “vegan leather,” sequins, and various bondage and sex motifs to make its products.

Nine-year-old Nemis Quinn Mélançon Golden, also known by his drag name “Lactatia,” became a sensation after appearing onstage at the Montreal stop of the “Werq the World Tour.” His mother, Jessica Mélançon, encourages Nemis to be a “drag queen.”

Breitbart and the Daily Caller originally sounded the alarm at Nemis named House of Mann’s “covergirl,” and being featured alongside “vegan leather harness jackets” and “fetish stripper boxer briefs.”

“If you can’t handle a kid in a sequin onesie, maybe the future isn’t for you,” Hilton tweeted in response. He said he “woke up to countless tweets telling me ‘kill yourself’ and calling me a ‘pedo’ after we announced 9 year old drag superstar Lactatia as our new HOUSE OF MANN covergirl.”

“I think this new generation of drag kids is brilliant and inspiring!” Hilton tweeted. “People will talk no matter what, might as well give them something FIERCE to look at!”

An August 2017 video on Hilton’s twitter account shows him dressed as a female mermaid reading a picture book to toddlers. The few lines of the story he reads in the video seem to be from a pro-transgender book.

The “Queen Lactatia” instagram account shows Lactatia wearing the onesie in a video and photo posted on December 31, 2017.

Numerous pro-LGBT websites have written stories praising Hilton in the midst of backlash.