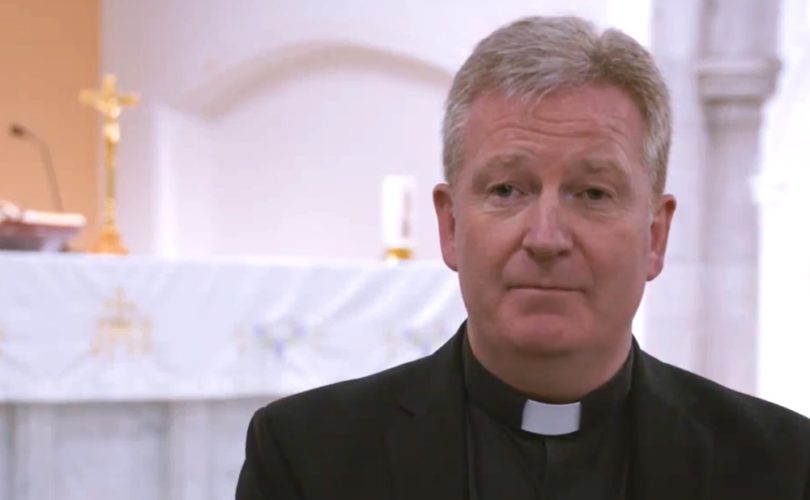 (LifeSiteNews) — An Irish bishop who previously described a ban on same-sex marriage blessings as “hurtful” has told the dissident “We Are Church Ireland” group that the “door isn’t closed” on the question of married priests.

“We Are Church Ireland” rejects magisterial teaching on the male-only priesthood, sodomy, abortion, divorce and the denial of Holy Communion to those in adulterous relationships.

Bishop Paul Dempsey, the youngest ordinary in the country, failed to correct the heretical pronouncements of “We Are Church Ireland” during the address on October 12, including its persistent call for the ordination of women priests. The Bishop of Achonry instead focused on Pope Francis’ vision for the synodal process that is now underway across the world.

Bishop Dempsey, who did not respond to LifeSite’s request for comment, insisted that Pope Francis has not “closed the door” on the question of married priests after the Amazon synod in October 2019.

“[C]ritically and very importantly, and maybe this wasn’t emphasized at the time, the door is not closed on that question [of married priests] and the Pope hasn’t closed the door on that question, but maybe it’s for another time,” Bishop Dempsey told the online audience of 20 participants.

Cardinal Robert Sarah, the former prefect of the Congregation for Divine Worship and the Discipline of the Sacraments, is one of several cardinals who have condemned the proposal to allow priests to marry in recent years, describing such a move in 2018 as one that would lead to “serious consequences and to a definite breach with the Apostolic Tradition.”

Cardinal Walter Brandmüller had also reminded German politicians in 2018 that the question of female priests has been authoritatively ruled out by Pope John Paul II, and that anybody who insists on the ordination of female deacons “has left the foundations of the Catholic faith” and “fulfills the elements of heresy which has, as its consequence, the exclusion from the Church — excommunication.”

Responding to Dempsey’s online address, chairman Richard Greene of Ireland’s Alliance in Defense of Family and Marriage (ADFAM) said church leaders should “realise it’s an act of charity to warn against error and heresy.”

“Catholics who hold to the true faith in Ireland are so very tired of bishops failing to correct error or stand up for controversial teachings,” Greene told LifeSiteNews.

Bishop Dempsey had distanced himself from the Vatican’s ban on blessing homosexual couples in March this year, calling it a “hurtful response from the Church to people with same sex orientation” in a reflection posted the Irish Catholic bishops’ website.

The Congregation for the Doctrine of the Faith (CDF) announced March 15 that the Church cannot bless homosexual relationships since God “does not and cannot bless sin.” A question to the CDF about whether or not the Church has the “power to give the blessing to unions of persons of the same sex” was answered in the “negative” by the congregation’s prefect, Cardinal Luis Ladaria Ferrer.

The congregation’s statement was assented to by Pope Francis. The Congregation stated that it is “not licit to impart a blessing on relationships, or partnerships, even stable, that involve sexual activity outside of marriage (i.e., outside the indissoluble union of a man and a woman open in itself to the transmission of life), as is the case of the unions between persons of the same sex.”

Bishop Dempsey called the language used a “problem” that “at best it is experienced as cold and distant, at worst hurtful and offensive,” he claimed.

“We Are Church Ireland” is among a range of heterodox groups that continue to attack Catholic teaching in other areas as well. In 2019, former Catholic priest and LGBT activist Bernard Lynch addressed the group, an Irish-born man who secretly “married” another man during his time working as a priest with the homosexual community in New York and London.

“We Are Church Ireland” hosted a Pride meeting in Dublin during the 2018 World Meeting of Families, with lesbian news presenter Ursula Halligan interviewing former Irish president Mary McAleese, a long-standing critic of the Church’s teaching on the sinful nature of homosexual acts and disordered inclinations of people experiencing homosexual attraction.

The “We Are Church Ireland” audience laughed as McAleese sarcastically said she had “not yet” gone to Confession after voting “Yes” to overturn Ireland’s ban on abortion, a constitutional change that has resulted in the killing of more than 13,243 preborn babies to date.

McAleese, who previously made inconsistent claims about her interactions with Pope John Paul II, was widely criticized in 2019 for misrepresenting the Pope’s position by implying he had endorsed marital rape in his 1960 book Love and Responsibility.

She continued to deny any wrongdoing after the erroneous remarks were pointed out, even calling the mainstream Irish Catholic newspaper a “fetid trough of fake news” for its accurate coverage of her speech.