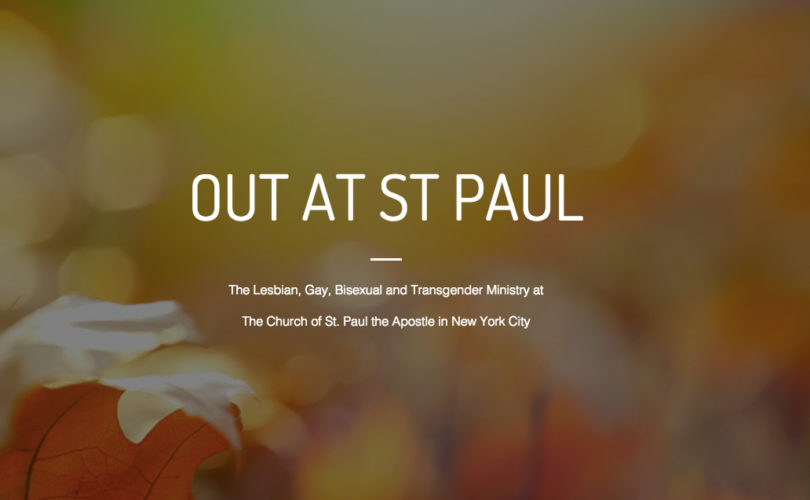 October 6, 2015 (LifeSiteNews) – An “LGBT” ministry at a New York City Catholic parish participates in and promotes gay 'Pride' events, promotes groups that encourage those with same-sex attraction to join the lifestyle, and otherwise implicitly encourages those suffering with same-sex attraction or gender dysphoria to act upon their inclinations in conflict with Church teaching.

Out at St Paul (OSP) is a group for lesbian, gay, bisexual and “transgender” individuals hosted by the Church of St. Paul the Apostle in New York City. The group states that it “seeks to engage our Catholic faith through service to our community, social activities and the exploration of Catholic spirituality.”

St. Paul the Apostle is the mother church of the Paulist Fathers, the religious community that runs Paulist Press, which recently published a book by German Cardinal Walter Kasper, the leading force behind a proposal at last year’s Extraordinary Synod on the Family to allow Communion for divorced and civilly remarried Catholics. The Catholic parish lists OSP among its Faith in Action offerings.

The OSP website promotes various “Pride” announcements and other pro-homosexual initiatives. One of the group’s partners, the Gay Men’s Health Crisis, whose website is linked to on the OSP website, provides “online hookup tips,” with sexually suggestive photos of homosexual men, to foster HIV prevention.

Specifically regarding homosexuality, Church teaching says that while homosexuals must not be subject to “unjust discrimination,” homosexual tendencies are disordered, and gravely immoral when acted upon.

LifeSiteNews contacted OSP several times, asking the specifics of any relationship between the group and Paulist Fathers and/or the archdiocese. LifeSiteNews also asked OSP about the group's approach to Catholic teaching with regard to human sexuality and marriage. OSP did not provide a response.

The Archdiocese of New York did not respond to LifeSiteNews’ inquiries.

OSP took part in the 2015 New York Pride Parade, and an OSP-sponsored “Mass in Celebration of Pride Month” was held June 25 in the West (Greenwich) Village, a known gay destination.

Throughout June OSP made Facebook posts commemorating June as “Pride” month, featuring “prominent figures who made a difference in the lives of Lesbian, Gay, Bisexual and Transgender people.” This includes radical gay activists and groups like PFLAG, Act Up, Harvey Milk, Elton John, and the lesbian bar Mona's 440 Club.

The June 23 post highlighted The Netherland's decision to become the first country to legalize same-sex 'marriage.'

The June 30 post was on Pope Francis and his frequently misinterpreted “Who am I to judge” remark.

“These remarks (along with others the Holy Father made before his election as pope) have been seen as an encouraging change of tone from the papacy,” the post stated, “so much so that the American LGBT magazine The Advocate named Pope Francis their Person of the Year for 2013.”

A promotional video on “LGBT Catholics,” called “Owning Our Faith,” is featured on the OSP site as well.

It follows various Catholics who also self-identify as homosexual or “transgender” Catholics, along with family members, speaking about their experiences. Many of those shown on the video blatantly reject Church teaching on marriage and homosexuality in their statements and their professed lifestyle.

The video’s press release said it was aimed at “achieving the full acceptance of LGBT persons in the Catholic Church,” and it evokes “the need for change,” a report from Catholic News Agency (CAN) said. Creators said they hoped it would “reach thousands, including Pope Francis, many bishops and other prominent Vatican clergy.”

One man living in a homosexual “marriage” explains in the video that leaving the Church would mean that “it's never going to change.”

A copy of the video was presented to Pope Francis by Father Mark-David Janus, president and publisher of Paulist Press, in March. While the video may have reached the pope’s hands, the Vatican told CNA at the time there would be no papal endorsement of the LGBT activist video.

In a September 10 piece in the Huffington Post, the video’s executive producer and director, Michael Tomae, and St. Paul the Apostle Pastor Father Gilbert Martinez were asked if the opposing views on the Church’s stance on LGBT issues can be reconciled.

“In the case of LGBT issues, the Church should not specifically go against its teaching on gay marriage to perform church weddings,” Father Martinez said, “however, being gay or lesbian does not go against Church teaching, so as a civil matter, the Church could support what's healthy and helpful for the good of a LGBT couple including marriage or employment.”

Father Martinez condemned instances where Church institutions have dismissed personnel because of their public violation of Church principles.

“Firing or dismissing people based on who they are is, at least in most cases, is civilly discriminatory and, I think, morally as well,” he said. “The creative tension helps both the church and society be true to themselves and grow into a just society for all its members.”

Tomae criticized Canon Law with regard to presenting one-self for sacraments while in a state of sin.

“It's discrimination when people are made to feel excluded based on who they innately are,” Tomae stated. “Some people definitely see it as discriminatory that the Church does not include gay people in the sacraments.”