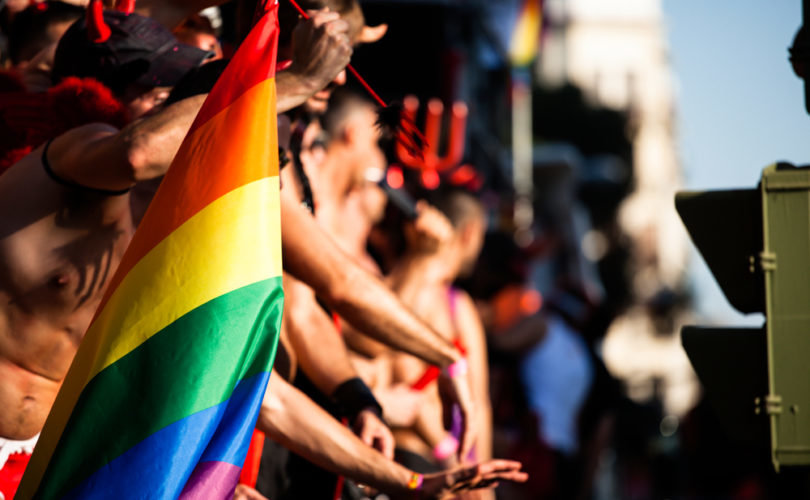 LONDON, June 26, 2015 (LifeSiteNews) — An LGBT group for Catholics supported by Britain’s most influential cardinal will participate as a registered group at a major ‘gay pride’ event this weekend.

Westminster Cardinal Vincent Nichols says LGBT Catholics Westminster is hoping it will serve as an “opportunity for evangelization,” but also notes that they “arranged independently” to march in the event.

The group’s leader, ex-priest Martin Prendergast, has been in a homosexual civil partnership with Julian Filochowski, the former head of Cafod, since 2006. Cafod is the official bishops’ conference charity for overseas development.

Prendergast has claimed on film that “a lot of us who are in civil unions have had services of blessing in Catholic churches.”

The parade, to be held in central London, describes itself as providing “a platform for every part of London’s LGBT+ community (lesbian, gay, bisexual, trans, queer, questioning, intersex, non-binary, asexual, polysexual, genderqueer and gender variant).

The LGBT group will march alongside homosexual and transsexual rights activists, “gay marriage” supporters, drag queens, and a host of semi-nude dancers and sadomasochistic displays, among others.

LGBT Catholics Westminster was appointed by Cardinal Nichols to provide pastoral provision to self-identified LGBT Catholics. The group gained notoriety for its “Soho Masses,” before being moved to the Jesuit Church on Farm Street, central London.

In one video, the group is seen during Mass in Soho, with a rainbow flag draped over the lectern, and what appears to be a man with a dress and wig on, reading one of the bidding prayers.

The group will be joined by “LGBT Catholics YAG,” the affiliated youth group for LGBT Catholics. On their website they proclaim:

Cardinal Nichols’ press secretary, Alexander DesForges, contested the idea that the cardinal supports the homosexual organization, or that it is an “official body” of the archdiocese, but nonetheless acknowledged that the cardinal “arranged for pastoral care to be provided to the group through a parish of the Archdiocese (Farm St) and by a designated priest of the Archdiocese.”

“The Church’s pastoral outreach recognises that baptised persons with a homosexual inclination continue to look to the Church for a place where they might live in authentic human integrity and holiness of life,” he told LifeSiteNews. “Being welcomed and participating in their local faith community is the foundation of spiritual support that the Church offers to them, particularly so when they feel marginalized by society, which is so often the experience of this group of people.”

“The Cardinal’s understanding is that the LGBT group has registered to take part in the gay pride parade as they see this as an opportunity for evangelization,” he added. “This is something which they have arranged independently.”

More than just a parade

In his message of support for last year’s parade, British Prime Minister David Cameron said,  “I’m immensely proud to be the Prime Minister of the country which is – and this is official – the best place in Europe to be gay, lesbian, bisexual or transgender…we are committed to improving LGBT rights across the planet. … We should encourage the rest of the world to take our lead.”

On their website, the parade organizers state, “With so much of the legal framework for equality now in place, our attention is focused on the attitudinal and social change.” They then set out demands to policy makers and legislators, with a clear emphasis on promoting their agenda in schools:

Backers of the demands include vociferous and longstanding gay rights activist and former MEP Lord Michael Cashman OBE, Labour MP and former Director of Public Prosecutions Sir Keir Starmer MP, who argued that it was not in the public’s interest to prosecute abortionists caught on film authorizing sex-selective abortions.

The number of high profile sponsors and groups marching in the parade is staggering.

It has the full backing of the Mayor of London, Boris Johnson, who is listed as one of the sponsors, along with Barclays, Thomas Reuters, Starbucks, and Baker & McKenzie.

Other sponsors include PinkNews and GayStarNews. In a recent article, GayStarNews reported on the Sao Paolo gay pride parade, in which a 12-year-old boy wearing nothing but a small pair of shorts, is filmed ‘twerking’ like Miley Cyrus, while surrounded by baying members of the parade and drag queens, which they described as:

“A video of a young boy, no more than 12 years old, twerking and having a great time at a Pride is going viral… the as-yet unidentified boy is seen dancing in short blue denim shorts to RuPaul's Sissy That Walk, as he was applauded by drag queens and revellers.”

Over 40 gay pride parades are expected to take place in the UK in the coming months.