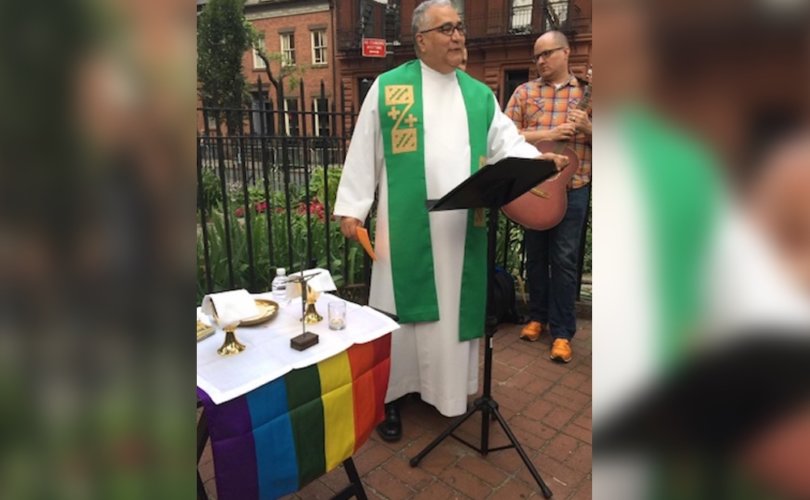 January 23, 2018 (Joseph Sciambra) – On January 20, 2018, Out at St. Paul, the LGBT ministry located at the Parish of St. Paul the Apostle in the Archdiocese of New York posted to their official Facebook page a link to an article about St. Sebastian which appeared on the web-site QSpirit. According to Kittredge Cherry, the principal author-contributor and founder of QSpirit:

Saint Sebastian has been called history’s first gay icon and the patron saint of homosexuality.

Kittredge is a longtime gay rights activist who advocates for ecumenical LGBT-inclusion within Christianity. A major focus of her work has been the exploration of so-called “Queer Saints.” She is also the author of “Art That Dares: Gay Jesus, Woman Christ, and More,” a collection of mostly homoerotic themed Christian-inspired images from various artists including Franciscan iconographer and James Martin favorite Robert Lentz as well as gay Catholic priest William Hart McNichols. But her most controversial book remains the novel “Jesus in Love;” Kittredge explained:

What if Jesus knew how it feels to be queer?

Here, Kittredge’s analysis of art is agenda-driven and shoddy; she equates masterful works of art with pornography; not realizing that, for example Il Sodoma’s “St. Sebastian” (detail above) combines the ideal beautiful body as envisioned by the Ancient Greeks and completely transforms that form into a new paradigm of Christian beauty through the agony of martyrdom. Michelangelo repeatedly accomplished the same feat with the beauty of the male body reflecting the Love of the Creator for His creation.

This is not the first time Out at St. Paul promoted Christian dissident theories and artworks; on December 21, 2016, they posted a link to an article by lesbian feminist artist and author Angela Yarber titled “Painting Mary(s), Queering Mary(s),” in which she argues the following:

In every nativity scene, we see images of a so-called “holy family” that likely doesn’t look very much like the family’s most queer folk create: a straight, cisgender couple, and a baby. This family is lauded by the Church as the quintessential iteration of what family should look like. When our families don’t look anything like this, it’s easy to see how celebrating the birth of Jesus is fraught with emotional and spiritual hardship.

There is good news, though. We can subvert this narrative of traditional family by queering the story.

I’d contend that Truth’s words queered traditional understandings of Mary. She was responsible for birthing Jesus, for ushering Emanuel into the world. Man had nothing to do with it. If we take this a step further, borrowing from feminist theology and boldly claiming that God is a She, then we queer the Christmas narrative even further. Mary and She Who Is (God) brought Jesus into the world. Jesus had two moms!

So, I’d contend that Mary’s very being, her family, and the entirety of Christmas is actually quite queer.

Out at St. Paul also posted a homoerotic icon by Robert Lentz of Sts. Perpetua and Felicity and they once asked: “Who’s your favorite queer saint?” James Martin is a frequent visitor and supporter of Out at St. Paul and he recently spoke at St. Paul the Apostle during his book tour for “Building a Bridge: How the Catholic Church and the LGBT Community Can Enter into a Relationship of Respect, Compassion, and Sensitivity.”

Some upcoming events at St. Paul the Apostle, sponsored by Out at St. Paul, includes the group’s annual retreat; this year the will be “LGBTQ relationships.” They continue:

What does it mean to be a follower of Christ and honor God with our sexuality? How can we integrate Christian sexual ethics with healthy LGBTQ relationships?

On February 25, 2018, Out at St. Paul will host a panel discussion on foster parenting and adoption. An accompanying image for the event contains symbols for different families – including same-sex couples.