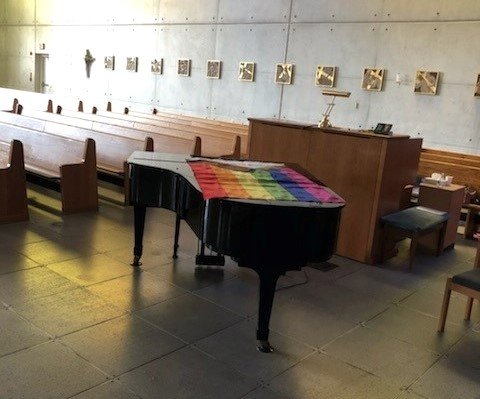 TORONTO (LifeSiteNews) – LifeSiteNews has learned that a pride flag was displayed at a Catholic Church in Toronto.

A reader emailed an image of the newest version of the pride flag, the so-called “progress flag,” draped over a piano at St. Gabriel’s Parish.

St. Gabriel’s is located in the North York region of Toronto and is served by Passionist priests.

Every Passionist takes a special vow to spend his energies in promoting the remembrance of the sufferings of Jesus, the memory of the Cross, and reflection of the meaning of the Cross for the world.

About the promotion of homosexuality, the Catholic Church teaches homosexuality activity is “contrary to Natural Law” and that “homosexual acts are intrinsically disordered.”

In addition, the Church teaches that “under no circumstances” can homosexual activity “be approved.”

In recent years, the Passionist order in Canada has taken a leftist turn and has largely embraced environmentalism as an aid to Catholic spirituality.

St. Gabriel’s has been at the forefront of the environmentalist push, having updated the church to represent a “Catholic vision of ecology,” inspired by the writings of deceased American Passionist priest Thomas Berry.

Berry wrote extensively on ecology and made claims such as “Any progress of the human at the expense of the larger life community must ultimately lead to a diminishment of human life itself.”

He wrote in a book called The Great Work that trees had “tree rights” and mountains had “mountain rights.”

LifeSiteNews emailed the pastor of St. Gabriel’s and the parish office for a comment, but has not received a reply.