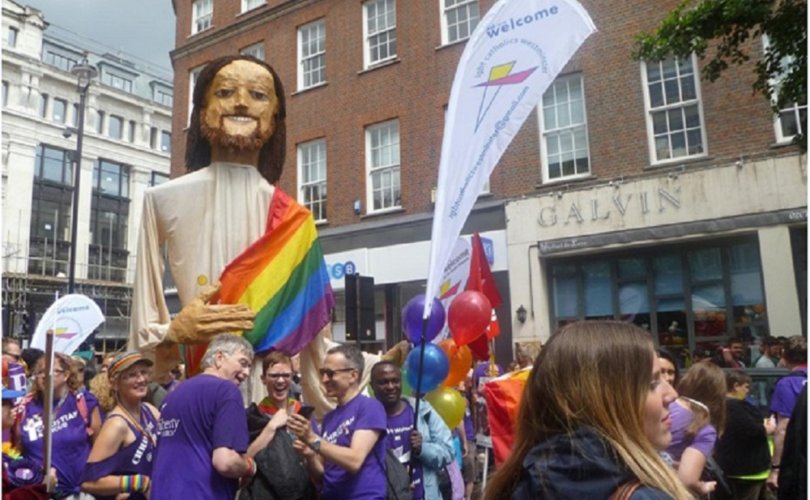 ENGLAND, November 4, 2019 (LifeSiteNews) – The Catholic diocese of Salford in north-west England has become the latest of multiple Catholic dioceses around the United Kingdom to begin hosting “LGBT+ Masses.” In Salford, as in the other dioceses, the LGBT+ Masses enjoy the support of their respective local bishops.

Advertisements for the Masses have become widely available in churches and on various official parish and diocesan websites. Many of these advertisements are emblazoned with the rainbow flag or popular Catholic images such as crosses or the Sacred Heart filled with the rainbow colours. Several of the groups involved in organizing these Masses take part in their local homosexual “pride” events.

In none of the advertisements or official publications about these Masses is the Catholic Church’s authoritative, constant teaching that homosexual sexual acts are inherently sinful made clear.

Playing a key role in the promotion and support of many of these Masses is the group “Quest.” Quest states on its website that it desires to see the “acceptance of homosexual relationships by the Catholic Church” and that its purpose is to help homosexuals reconcile their Catholic faith with the “full expression of their homosexual natures.” At their annual conference in 2018, Quest organizers showed a specially pre-recorded video presentation by the pro-homosexual celebrity priest Fr. James Martin.

This increase in LGBT+ Masses around the country has been welcomed by LGBT+ Catholics Westminster. This group has enjoyed the long-term support of Cardinal Vincent Nichols, who is both their local ordinary and the senior Catholic cleric in England. In March of this year, the group were given privileged seats at a papal audience in St Peter’s Square, Rome, after which they were invited to meet and take photographs with Pope Francis. They were introduced to Pope Francis by Martin Pendergrast, an ex-priest who has been in a civil union with Julian Filochowski, the former head of Cafod, since 2006.

The diocese of Salford is the latest diocese in England to initiate an LGBT+ Mass — hosting its first such Mass on October 12 at Holy Name Church in Manchester. The Quest website claims that they played a crucial role in organising the recent Mass in Salford. They say:

The origins of this development go back to a meeting between the then Chair of Quest, Ruby Almeida, Gez Hodgson, Fr Paul Daly and Bishop John Arnold in September 2017 when the possibility of closer links with the LGBT+ Catholic community and the Salford Diocese were discussed. Bishop John was very supportive of the idea and so it has proved in subsequent contacts with his representatives.

In an email sent to the clergy of his diocese, Bishop Arnold reported his satisfaction with the event.

Thanks, I think, to good planning and organisation, the LGBT Mass went very well, and better than expected. The atmosphere was very good and the comments of people as they left were unanimously encouraging. There were something like 300 people there, a congregation which included family and friends and others who simply came along because they thought it was an important occasion. We must see now what the organisers might want to plan for the future. While it is good to recognise the needs of the group, it is also important not to organise things in such a way as to isolate them from parish life. There were just two voices of dissent present at the Mass and their discourtesy rather bankrupted the value of any statement that they might have wanted to make. My thanks to the Jesuit community who hosted the event at the Holy Name and to all who contributed to the occasion.

In the diocese of Clifton, an “LGBT+ Mass” began in March this year at the parish of St Nicholas of Tolentino in Bristol. The parish website makes clear that the Mass is happening at the request of Bishop Declan Lang, the local ordinary.

“Bishop Declan wishes to express pastoral care and concern for our Catholic LGBT+ community and so has asked St Nicholas of Tolentino Church to celebrate a series of Masses for this community and their friends and family and all who wish to take part.”

The same website also displays an image of a sculpture of Our Lord’s Sacred Heart, crowned with a cross, and painted in the colours of the rainbow flag. The parish promotes its Mass with a poster that includes an image of a cross filled with rainbow colours.

The Masses are also being advertised on the official diocesan website.

Quest explain on their website that the Masses in the diocese began after they met with Bishop Lang last year:

Quest member John Flannery and Chair Ruby Almeida met with Bishop Declan Lang in November 2018. Bishop Lang approved the idea of holding a Mass for LGBT+, families and friends. Now, after less than three months, a series of Masses are to be held at St. Nicholas of Tolentino in Easton, Bristol.

The diocese of Nottingham organises an annual LGBT+ Mass and promoted an LGBT Mass on the feast of All Souls’ Day on November 2, 2019. The poster advertising the events states:

LGBT MASS: Fr Simon Robson OP will celebrate Mass for LGBT Catholics, their families and friends on Saturday, 2nd November at Sacred Heart Church, 25 Mere Road, Leicester, LE5 3HS, at 2pm. This is All Souls’ Day. We will remember all those who have been tortured, died and killed because of their gender identity/sexuality. All are welcome!

The website for the Nottingham diocese hosts a page with an explicit endorsement for the “LGBT+ Ministry” from Bishop Patrick McKinney. His message reads:

Bishop Patrick wishes everybody a warm welcome in the diocese; that includes, in an explicit way, members of the LGBT+ community. To demonstrate and share the Good News of God’s love for all, the bishop has set up a pastoral ministry directed particularly at LGBT+ people, their families and friends. LGBT+ Catholics share their lives as disciples of the Lord Jesus with all other groups and communities in our diocese; we enrich each other and grow together as the Body of Christ.

Last year, Bishop Peter Doyle of the diocese of Northampton attended a Quest conference. While there, he took part in a panel discussion about a specially recorded video presentation that pro-homosexual celebrity priest Fr. James Martin made for the event. A report from the Quest website says:

Bishop Peter spoke very warmly on behalf of the bishops, whilst acknowledging that there was a diversity of perspectives among his colleagues on LGBT+ issues. The fact that he is the first bishop to attend a conference for many years is significant.

In 2015, Bishop Doyle took part in a Vatican Radio interview where he suggested that Catholic teaching, via future synods, might eventually develop to accept “same-sex relationships.” When asked why more hadn’t been said about LGBT issues at the October 2015 Synod on the Family, he said:

I think it’s a combination of it being too difficult and also the basic, I suppose, theological anthropology — what I mean by that is that our understanding, from the Scripture, of man and woman… there is no room at the moment for a same-sex relationship. And so, I think they’ve sort of said — well, they haven’t actually said this, but in my heart, I wonder whether they’re saying — ‘We don’t know what to do.’ Now, that’s not going to be very helpful for these good people, but maybe something will come out unexpectedly, but at the moment, it seems to be being parked to one side.

When asked whether there needed to be a greater theological exploration of these issues, he said:

Well I think that has got to happen, hasn’t it? I think we can’t leave people dangling in the air and in limbo. The Lord loves us all, so somehow we have to find a way of embracing everybody. But it’s a real challenge at the moment and I just don’t think we’ve really begun to deal with it in any serious manner. That would almost need a Synod on its own I think.

Bishop Doyle is chair of the Catholic Bishops’ Conference of England and Wales Committee for Marriage and Family Life and a member of the Department of Education and Formation.

The diocese of Middlesbrough hosts a monthly LGBT+ Mass since December 2017. It does so at the famous York Bar Convent, the oldest Catholic convent in England, dating back to 1686.

The diocese of Middlesbrough promotes the website Middlesbrough Diocese LGBT+ Ministry on its own official diocesan page. The same webpage also promotes a Facebook group dedicated to the “ministry.” In June of this year, this Facebook page posted an album of photos showing the group’s participation in the “Pride” event in York. This event was led by schoolchildren from the local area.

The Middlesbrough Diocese LGBT+ Ministry website makes clear that those involved feel they have the support of their local ordinary, Bishop Terry Drainey, for their activities. They state on their home page:

Our Father in God, Bishop Terry, is clear there is a warm welcome here for everyone and that this includes, in an explicit way, members of the LGBT+ community, and their friends and family.

The support for Quest from bishops and Catholic dioceses throughout England is perhaps unsurprising, given that in 2017, Cardinal Vincent Nichols, the most senior Catholic cleric in England, wrote to priests recommending making use of Quest to minister to “those who live with a same-sex attraction and are often very anxious about their journey to God and their relationship with the Church.”

Quest had previously been banned from the Westminster archdiocese by Cardinal Nichols’s predecessor, Cardinal Hume, because of its overt promotion of homosexual behavior contrary to Catholic teaching.

In 2012, the LGBT Mass in Westminster was moved from Our Lady of the Assumption, on Warwick Street, to the Jesuit-run Church of the Immaculate Conception on Farm Street. At the time of the move, Cardinal Nichols issued a statement following concerns that the Masses were being used to promote the homosexual lifestyle. In that statement, he said that “consideration is being given to the circumstances in which these Masses are celebrated to ensure that their purpose is respected and that they are not occasions for confusion or opposition concerning the positive teaching of the Church on the meaning of human sexuality or the moral imperatives that flow from that teaching, which we uphold and towards which we all strive.”

In July of this year, the group again participated in the London “Pride” march and on their Facebook page dubbed the Mass that followed “our post-Pride Mass.”

The group has previously enjoyed the explicit support of Cardinal Nichols for walking in the march.

The home page of their website includes a picture that also appears to be from a “Pride” event. The logo displayed on their website depicts a cross against the background of a rainbow flag.

Correction 11-06-2019: A previous version of this article misnamed the bishop of Middlesbrough. We regret the error.