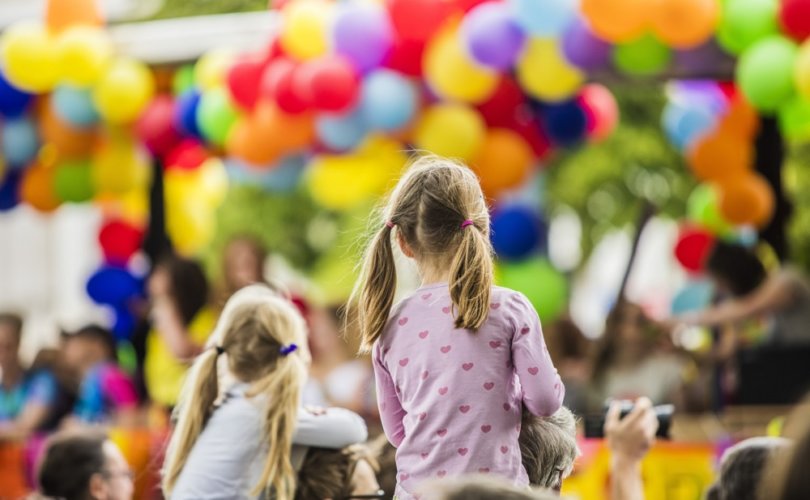 June 20, 2019 (LifeSiteNews) — A sex therapist claims she cannot imagine “a safer place for families to bring children” than an LGBTQ “pride” celebration.

According to HuffPost Canada, Pega Ren brought her grandchildren to a homosexual “pride” parade in British Columbia. When asked about the appropriateness of children participating in the LGBTQ event, she said, “I can’t imagine a safer place for families to bring children.” Pride parades in Canada and around the world feature not only public nudity and sex acts, but also various other forms of perversion and deviance on display.

While even within LGBTQ circles there has been debate over whether or not children should be exposed to displays of adult nudity and sexuality, HuffPost quoted a retired sexual diversity professor, David Rayside of the University of Toronto, who said, “Pride has always had a kind of outrageous edge to it. And should we alter that? It is not the Santa Claus parade, and it never was. It shouldn’t be. It can’t be.” Rayside said it is “important for parents to bring their kids” to “pride” celebrations, adding that he has never seen people “fuss about what they see there.”

S. Bear Bergman told the publication there is no reason not to take children to “pride” parades. He told HuffPost that he takes his own children to the Toronto Pride parade every year. He said, “It’s their right as queer spawn. And as a parent, I might want to take my kids to Pride, because they might be lesbian, gay, bi, trans, queer or two-spirit.” Bergman said the display of adult public nudity should not be a problem for children, saying, “… nobody likes nakedness more than children.” Bergman added that he does not want his children exposed to “compulsory heterosexuality, demonstrations of sexism, demonstrations of racism, demonstrations of able-ism, violence. These are all way higher on the list than some homosexual’s tuchus.” Bergman is a writer and publisher of books for children.

According to HuffPost Canada, sex therapist Ren believes that children somehow benefit from seeing “people loving one another, from seeing diversity and inclusion. Children suffer from seeing violence and fear, hatred and divisiveness.” Ren also claimed that a “pride” parade, “from kink to nakedness, is an excellent opportunity for parents to do unbiased sex education.”

In contrast, pediatrician and child welfare advocate Dr. Michelle Cretella responded to LifeSiteNews, noting via email: “We know from decades of research on the impact of all forms of media [books, radio, TV, internet etc etc] on children that they will act out what they see and hear.” Dr. Cretella is the executive director of the American College of Pediatricians. Saying this is true of sex, violence, and substance abuse, Cretella wrote: “Parents should no more take their children to a Pride parade than they should sit them down to watch pornography.” Regarding the effects of adult nakedness on children, and the proliferation of cross-dressing children in Pride Parades, Cretella asserted that a “segment of the LGBQT movement has long wanted the normalization of pedophilia as an inborn sexual orientation. The National Man Boy Love Association still exists.” According to NAMBLA’s website, the organization’s goal is “to end the extreme oppression of men and boys in mutually consensual relationships.”

In an interview with LifeSiteNews, Dr. Richard Fitzgibbons, a psychiatrist who has done seminal work in the area of forgiveness and anger management, deplored the notion that children like to see nakedness. “Young children are not interested in sexuality,” Fitzgibbons said, “They’re interested in bonding, warmth and happiness with their families and peers.” Exposing children to nudity and sexuality “is the same as exposing them to pornography,” he said. A number of studies have shown the negative effects suffered by adolescents and children exposed to pornography, said Fitzgibbons. Exposing children to “kinks and fetishes,” said the psychiatrist, “would be traumatic.” In his practice, Fitzgibbons said he has had numerous patients who were traumatized by exposure as children and adolescents to homosexual and heterosexual acts and pornography. “They thought they were going to be used next,” he said, “in that process, so it scared them.” Fitzgibbons is the president of the Marital Healing Institute in Pennsylvania.

“Kinks and fetishes don't belong at pride” – A thread by me, a kinkster who has been going to pride for years and has a few things to say on the matter. ❤️��️‍�� pic.twitter.com/jPGeck2tiC

Signaling some debate among LGBTQ advocates over the exposure of children to deviant sexual behavior at “pride” parades on Twitter, a now deleted tweet by user Nikole pleaded, “Please don’t bring your k*nks/fet*shes to pride, there are minors at Pride and this can sexualise the event” (see archived tweet here).

In a series of tweets, Twitter user “Amp – Mr Friendly” opposed restricting children from Pride parades, writing that he is proud of his own “kinks.” Defining the goal of LGBTQ celebrations, he wrote: “Pride is, among other things, a defence of sexual freedom, the very nature of what kinksters want in our world. As we continue to lose freedoms online and spaces in the real world, we want nothing but to defend what we love and have pride about.”

Writing that protecting children is not the responsibility of “pride parade” organizers, he tweeted: “Pride is as much about politics and activism, representation and being sexual yourself, as it is about celebrating family. So if you haven’t talked to your children about birds and bees, best do that before pride where they could see a number of sexually expressive floats.”