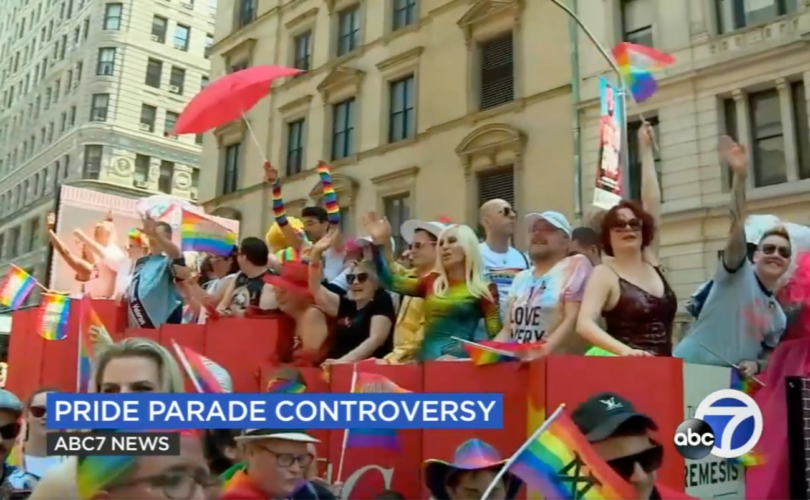 (LifeSiteNews) — After years of welcoming the participation police contingents in Pride events, LGBTQIA+ Pride parades are increasingly banning gay, lesbian, and transgender police from marching in uniform, citing perceived violence against Black Americans and the role that police once played in enforcing laws that gay and transgender-identifying persons viewed as oppressive.

In an ironic twist, long since big city police departments across the nation have been infiltrated and ostensibly conquered by LGBT forces — numerous officers now identify as gay or trans — Pride planners are rejecting their presence, essentially turning back the clock to the night of June 28, 1969, when New York City Police raided a gay club in Greenwich Village known as the Stonewall Inn, the event that triggered the gay movement, launching a thousand modern day Pride Parades and the leviathan Pride month.

In recent years, many larger U.S. cities have gone to great lengths to establish close bonds with LGBTQIA+ identifying persons, including rolling out fleets of squad cars splashed with the bright garish colors of the rainbow flag, suggesting that law enforcement is secondary to promoting sodomy and gender dysphoria.

San Francisco became a flashpoint in the controversy recently when the city’s Pride Parade organizers announced that police officers would be barred from marching in uniform.

“For some members of our community, the presence of the police in the parade is difficult for them given their history with the police department so we want to honor and make sure we protect and make people feel safe,” Ford said.

“For gay officers, the prospect of being excluded from Pride events can feel like an attack from their own community,” noted The New York Times’ Liam Stack in 2019. “It may feel as though they are being blamed for the misdeeds of overwhelmingly heterosexual agencies that can still be challenging places for L.G.B.T. people to work.”

For LGBTQ+ officers, this brings us back to a time when we had to hide at work that we were LGBTQ+. Now they ask us to hide the fact of where we work.

We are black, white, Asian, and LatinX. We are transgender, non-binary, gay, lesbian, and just plain queer. Some of us have been proudly parching in uniform in Pride for as many as 30 years.

“Let us be clear: this committee would not order the leather community to wear polyester at the parade,” continued the LGBT police statement, employing terminology that is peculiar to the LGBT world. “This committee would not order the drag community to wear flannel. But they have told us, peace officers, that if we wear our uniforms, we may not attend.”

The city’s mayor, London Breed, at first announced that she would boycott this year’s Pride Parade in solidarity with the banned police officers:

I love the Pride Parade, and what it means for our LGBTQ community and for our city. It’s one of my favorite events of the year. However, if the Pride Board does not reverse its decision, I will join our city public safety departments that are not participating in the Pride Parade. I’ve made this very hard decision in order to support those members of the LGBTQ community who serve in uniform, in our Police Department and Sheriff’s Department, who have been told they cannot march in uniform.

However, after two weeks of contention, the LGBTQIA+ parade organizers and the LGBTQIA+ police officer groups agreed to a compromise late Thursday allowing the uniformed officers to march in the parade. They issued a joint statement, saying in part:

Pride grew out of conflicts between LGBTQ communities and police at Compton’s Cafeteria and Stonewall Inn. Ever since then, we have attempted to bridge that divide.

That is why we are grateful to have reached a compromise solution today. It shows everyone is working in the spirit of Pride to come together! We have agreed that all first responders will march together in one contingent. Most law enforcement officers marching will be in casual dress. Police and fire department command staff will march in their class AA uniforms as regulated. There will be a small number of LGBTQ officers in uniform providing security for the contingent.

The Golden Gate city is not alone. It joins New York City, Washington, D.C., and Denver among others banning uniformed police participation.

Hostility to police within LGBT quarters first gained national attention in 2017 when a group of No Justice No Pride protesters blocked the Pride parade in the nation’s capital. The small group, which clashed with many other parade participants, demanded that law enforcement and corporate entities be banished from Pride events.

In particular, the group called for the restricting “uniformed police officers, including the LGBT Liaison Unit of D.C. Metropolitan Police Department and military personnel from participating in the parade.”

“We deserve to celebrate Pride without being forced alongside the Police who kill us,” said protester Angela Peoples in a No Justice No Pride statement, according to a Washington Blade report at the time. “Pride should be a haven for the entire LGBTQ community. The Capital Pride Board has shown who it’s prioritizing. No Justice No Pride is for everyone who has previously been excluded and for a different vision of what this event could and should be.”

“Mayor Adams supports inclusivity and allowing all New Yorkers to be true to who they are. Banning officers from wearing their uniforms at Pride is disappointing and contradicts our freedom of expression. That’s one of the many reasons why he has long supported and fought for LGBTQ+ officers to be able to wear their uniforms at the Pride parade. He will continue to do the same before next month’s parade,” spokesman Fabien Levy told the New York Post.

“Beginning in 2021, NYC Pride publicly banned corrections and law enforcement exhibitors from marching in their uniforms and participating in recruitment activities at NYC Pride events until at least 2025,” said Heritage of Pride, the group that runs the Pride Parade. “This action was a step in the path of transformative justice affirming our commitment to eliminating violence, harm, and abuse at NYC Pride events.”

“Before 2021, LGBT officers were welcome at the parade and Gay Officers Action League (GOAL) members have regularly marched in uniform with celebrants since that organization was founded in 1982,” the Post report noted.  “That all changed last year after the death of George Floyd in 2020 left New York and other major cities in the grips of anti-police mania.”