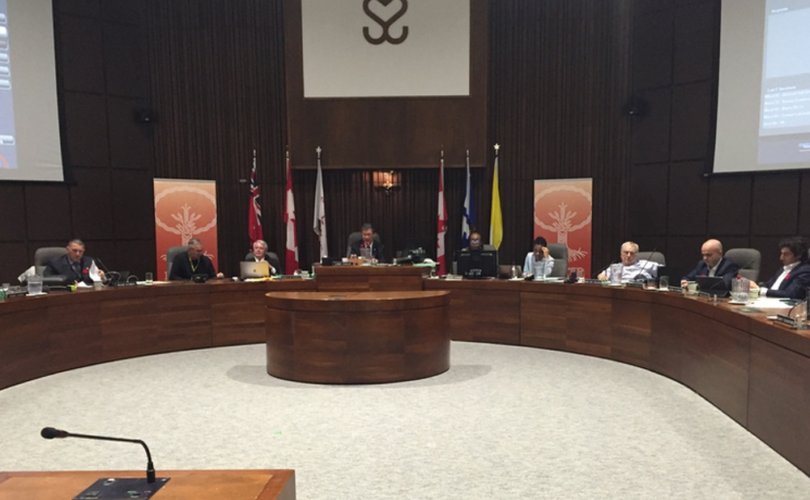 TORONTO, December 17, 2019 (LifeSiteNews) — The homosexual and transgender lobby and its allies on the Toronto Catholic District School Board (TCDSB) have ramped up attacks against trustee Mike Del Grande after he publicly defended his vote against enshrining gender ideology in the board’s code of conduct.

Trustee Markus de Domenico has now requested a special board meeting on December 23 to discuss whether Del Grande violated the board’s code of conduct and needs to apologize for referring to gender ideology as “evil.”

It’s the latest development in a relentless campaign against Del Grande, who along with Teresa Lubinski, Garry Tanuan and Nancy Crawford voted November 8 against including “gender ideology” and “gender expression” as well as “family and marital status,” as protected grounds against discrimination in the code of conduct, which governs staff and students.

After controversy erupted over remarks he made that night, Del Grande published his defense on LifeSiteNews last Friday, stating that gender ideology “is incompatible with the Christian anthropology of the human person.”

De Domenico apparently wants the board to address “where (Del Grande) speaks of the ‘Evil’ of gender ideology and by inference all those who accept it.”

LifeSiteNews has now launched a petition and postcard campaign directed at the TCDSB trustees and Toronto Cardinal Thomas Collins in support of the four who voted to protect the children in their care from gender ideology.

The petition notes that Pope Francis referred to gender ideology as “demonic” and “an error of the human mind that leads to so much confusion.” Pope Benedict referred to gender ideology as a “profound falsehood”; renowned medical experts such as Dr. Paul McHugh and Dr. Michelle Cretella condemned it as child abuse, and increasing numbers of individuals are publicly expressing regret over their “transitioning.”

Moreover, while the Archdiocese of Toronto conceded in a November 11 statement that it “recognizes that terms such as gender identity are included in the Code,” it added: “(W)e do not accept the view of the human person which underlies this terminology, since that view is not compatible with our faith.”

Meanwhile, so intent are Del Grande’s opponents in maligning him they have resorted to leaking private information to the media — leaving him unable to defend himself without similarly breaching confidentiality.

Most recently, the Toronto Star ran an “exclusive” story Tuesday by reporter Isabel Teotonio based on “a fax recently sent anonymously” to the newspaper revealing details of pro-abortion student trustee Taylor Dallin’s complaint against Del Grande — a complaint that was being handled in private.

“This hit piece by the far-left Toronto Star is the latest volley in its hate campaign against Catholic trustee Michael Del Grande. But the greater shame belongs to the anti-Catholic dissidents in the TCDSB who leaked this private complaint,” he told LifeSiteNews.

This nonstop attack by the LGBTQ lobby and their allies on the board underscores that Catholics need to publicly support those trustees who had the courage to oppose gender ideology, Fonseca said.

“All Catholics and people of goodwill who care about protecting children from harmful transgender ideology need to defend Del Grande and the other three good trustees who voted against gender identity theory,” he told LifeSiteNews.

“This ideology is destroying the lives and bodies of countless children” who are deceived into believing they need to “transition” to the opposite sex, which could involve hormone therapy and mutilation, he said.

“And when, in a few years some of them turn to suicide because they realize what they did was an irreversible mistake that left them scarred and mutilated, the ideologues pushing this garbage won’t be there for them make things all better,” Fonseca said.

“The only people defending children are Del Grande and the other three trustees. Please sign the petition to encourage and uphold these protectors of our vulnerable children.”