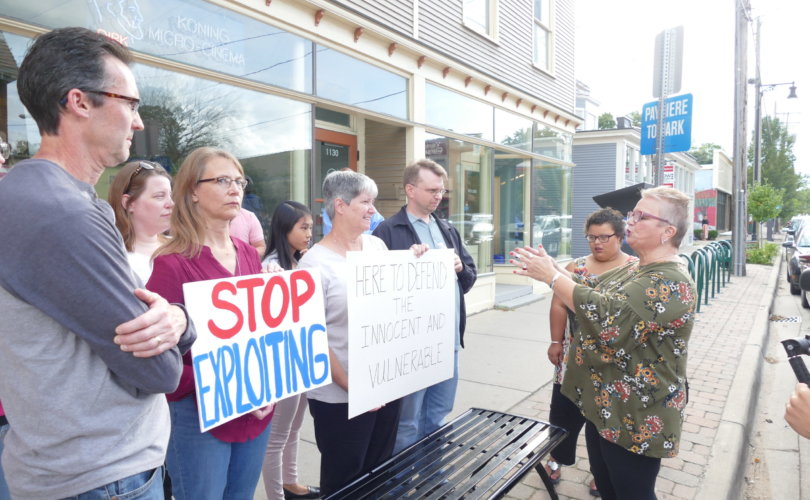 GRAND RAPIDS, Michigan, September 10, 2019 (LifeSiteNews) — Dozens of Christians peacefully protesting a drag show in West Michigan exploiting persons with Down syndrome this past weekend were called “Jesus freaks” and told to “f*** off” by multiple pro-“LGBT” supporters while standing outside the venue that hosted the controversial performance. The nonviolent protestors were members of various Christian and Catholic churches in the area, which is one of the most religiously conservative parts of the state.

Some of the protestors opted to remain silent but many, like Tom Root, a parent of a 34-year-old with Down syndrome, calmly defended Christian teachings on gender and sexuality when confronted by hostile proponents of the show. Root and others held signs that read “Love them, do not exploit them!” and “Stop the exploitation!” Topics like abortion came up during the heated exchanges as well. A heavy police presence was nearby.

The shocking “Drag Syndrome” performance was part of ArtPrize, an annual art competition founded in 2009 by Rick DeVos, the son of current U.S. Secretary of Education Betsy DeVos. In 2011, a massive 13-foot tall, 425-pound stained-glass image of Christ hanging on a crucifix won first place. The event has taken a decidedly liberal turn in recent years, however.

Wealthy Street Theatre is located near Grand Rapids’ bohemian “Eastown” neighborhood and hosted a Saturday night performance at 7:00 p.m. and a 6:00 p.m. show on Sunday night. While free tickets for both shows were all reserved, only the Saturday night gathering saw the theatre fill its 400-seat capacity. Approximately 15 attendees were themselves dressed in “drag.”

On Sunday night, local Fox affiliate WXMI-17 was filming outside the theatre. Protestors informed LifeSite that probably only “a couple hundred” people attended the 6:00 p.m. show and that when the Fox crew left, theatre staff took down the “sold out” signs that had been placed on the sidewalk, a move one protestor said was “clearly done on purpose to give the impression it was more of a success than it really was.”

Wealthy Street Theatre was not supposed to host the U.K.-based Down syndrome performers. A building known as “Tanglefoot,” a property owned by 31-year-old Peter Meijer, was where the troupe was originally scheduled to appear. But Meijer, who is running for Congress as a Republican, cancelled the performance after speaking with parents of children who have Down syndrome. Meijer expressed concern about “whether the individuals performing for Drag Syndrome are giving, or are in a position to give their full and informed consent.”

The ACLU has filed a civil rights complaint with the State of Michigan against Meijer, who has said he won’t apologize for “doing what’s right.”

Roughly five attendees at the performance Saturday night brought their own Down syndrome children dressed in opposite-sex clothing. One woman whose son was wearing lipstick told a protestor his sign was “offensive,” to which the man responded, “I find this entire event offensive.”

An emotional Nancy Krommendyk, a lifelong Grand Rapids resident, was on the verge of tears over what she was seeing. Her husband, Ron Krommendyk, told LifeSite the drag show was “manipulative” and that event organizers intentionally choose West Michigan because of its religious values. The pair run a Christian-themed ministry called “Freedom Counseling & Coaching.”

Inside the theatre, a “Content Warning” sign was taped to the wall so attendees were aware of what they were going to witness as they entered the seating area. It read, “PG-13 Rating – Adult Language: Please note that one of tonight’s songs does contain profanity.” A sign that said “All-Gender Bathroom” was also taped over the bathroom’s men and women entry signs. Alcoholic beverages were being sold at the concession stand and many of the city’s most well-known homosexual activists attended.

As the Saturday show began, the lights in the theatre dimmed and black lights were turned on. “Dice Santana,” one of the show’s emcees, strutted onto the stage as music started blaring. Earlier in the day, Santana, a young African-American, confronted the protesters and lectured them about how they weren’t being supportive of “love.” Santana proceeded to dance around and rip off his/her shirt, to which the raucous crowd let out an enormous roar. The show proceeded from there.

Men caked with makeup and wearing wigs and high heels did cartwheels on stage and ran up and down the aisles while lip-syncing various pop songs. In between performances, Santana would tell the raucous audience about how much “good” an event like this does for Grand Rapids, which has “come so far” in recent years.

Imitating a pastor, Santana mockingly invoked the name of Jesus Christ and asked the crowd, “can I get a yay-men!?” To which they shouted “yay-men!” Fewer than a dozen underage children were in the theatre for the Saturday night performance, which at times felt like a liturgical experience.

On both Saturday and Sunday night, interactions between protestors and supporters struck a similar tone, with protestors being accused of ableism and being judgmental. They were frequently asked if they knew someone with Down syndrome and how they could oppose the performers’ decision to “express themselves.” Almost every protestor at the event on both nights told LifeSite that they did have someone in their immediate or extended family with down syndrome. One protestor told LifeSite that they received multiple middle fingers from people passing by.

One young man supportive of the performance was so irate he walked in front of the protestors when they first arrived on Saturday at 5:30 p.m. and told them, “you disgust me!” When one protestor was about to respond to his remarks, the man shouted, “don’t even try to say something to me” before storming off to finish the cigarette he held in his hand. “Oh, I’m shaking,” he said to his friend as he walked away.

Some attendees at the event seemed to make it a point to mock the Christian faith of the protestors. One person who walked by the protestors called them “Jesus freaks” while one man who was later inside the theatre told Emma De Nooy, a pro-life, 16-year-old girl who was adopted from China and was protesting with her mom, that a miscarriage is “God’s version of an abortion.” De Nooy calmly disagreed with the man and later told LifeSite that the performers at the event are being “exploited” and that she “loves them, but just not what they are doing.”

A woman loitering around the entryway of the theatre shouted “Hail Satan!” on one occasion. She also danced in a vulgar manner while street preacher Stephen Nylen and others from Frontline Apologetics preached the Gospel on a small, elevated platform near the ticket line. Nylen called on those waiting to see the show to turn away from the path of destruction and accept Christ. Onlookers from across the heavily-trafficked street took an interest in Nylen and the protestors.

Tom Norton, a local politician running for Congress against Meijer, attended the Sunday night protest and engaged in a debate with a pro-LGBT person. The dozen or so protestors who showed up Sunday night prayed and thanked God together in a circle before leaving for the night. Norton was among them. A friendly young man named Jacob who had Down syndrome was also there with his parents.

LifeSite asked Peter LaBarbera, president of Americans for Truth about Homosexuality, for comment about the “Drag Syndrome” show. “As the older bother of a man with Downs, I suppose I should be shocked at the exploitation of mentally disabled people by pro-LGBT advocates in the name of ‘art.’” he said. “But why would a movement that pushes sexual and gender confusion on vulnerable, innocent toddlers stop at manipulating the vulnerable and innocent in the disabled community to advance a nefarious agenda?”

LaBarbera’s remarks captured the general feeling of how the Christians who showed up to protest the event felt overall. Protestor Bill Jaglowski, whose wife Denise is heavily involved in pro-life and pro-family activism in the area, echoed his comments. “It’s so obvious that the poor people at this event are being abused. I imagine that the event’s organizers and supporters would be in favor of aborting babies who have Down syndrome. It’s terrible what’s going on here. We need to continue to stand up for Christ the King!”