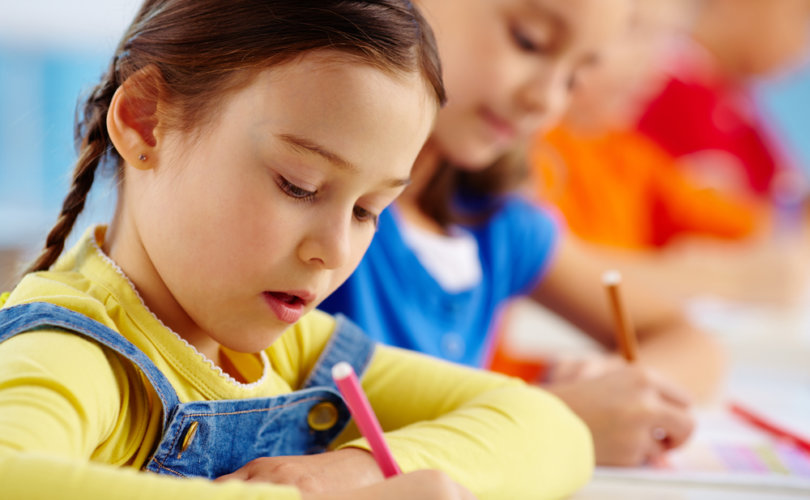 April 19, 2017 (LifeSiteNews) —British children starting in nursery school should be taught to accept as normal all LGBT persons and relationships, according to a motion the National Union of Teachers endorsed at their annual general meeting in Cardiff last weekend.

The Sex and Relationship Education (SRE) rewrite will instruct high schoolers to stay away from Internet predators, pornography, and problems posed by sexting. But specific promotion of LGBT persons and sexuality is not included.

That led to the motion the teachers passed, reported the London Telegraph. It calls on all teachers to “campaign to ensure a comprehensive age-appropriate content including promotion of LGBT+ matters for all schools from nursery throughout all phases of state education.”

Annette Pryce, a member of the National Union of Teachers executive committee, told the AGM that LGBT values had been left out of the rewrite only because of pressure from the “right wing, religious lobby.”

She added, “This new legislation has moved us forward, but it is not inclusive. Those generations of young LGBT+ people who have been failed by the system are still not told explicitly in the law that their lives are important too.”

However, Christian groups vigorously oppose the curriculum revision and the promotion of LGBT values. “It’s a form of child abuse,” said the Rev. Lynda Rose, an Anglican priest who heads the Voice for Justice and edited the recently published What Are They Teaching the Children?

Rose told LifeSiteNews that a majority of British schools are already teaching children as young as four that “It’s OK to have two daddies, it’s OK to have two mummies” without specifying LGBT groups by name. “They are normalizing these behaviors.”

Married, biological parents have more stable, long-lasting relationships than unmarried or same-sex couples, said Rose. “Stable, committed relationships are modeled to children. When they are deprived of that, they are more likely to make bad choices.”

Rose also said the increasing instability of adult relationships over the past 25 years has led to a serious increase in mental illness among British children. Promoting unstable LGBT relations on a young, captive and impressionable audience could lead to more instability and more problems.

“Adult sexual preferences are being transposed onto children, who have no frame of reference, no ability to be critical,” she said.

Rose also said the National Union of Teachers and other promoters of LGBT values were carrying out a long-term goal of the Left to destroy the West. Rose said the group of German Marxists called the Frankfurt School believed that the Western democracies would only fall to the revolution when the traditional family and Judeo-Christian beliefs were wrecked. The Left has championed feminism, homosexuality and gender fluidity, said Rose, with the destruction of the West in mind.

“The Left has maintained a concerted attack to take over the teaching unions and professions with a strong Communist bias since the 1960s,” she told LifeSiteNews.

Another conservative Christian voice in the UK, Christian Concern, has also spoken out against SRE changes. CC’s Tim Dieppe told a radio host, “We live in a highly sexualized society. More sex education for children is just increasing that.”

As for the alleged need to prepare young children to avoid predators, Dieppe responded that such instruction “teaches them that they are sex objects. They shouldn’t have to think about that at that age.”

He expressed doubt that young children could be prepared to resist adults. And if they fall victim to predators, such teaching “will create more guilt. Feeling like they ought to have stopped it in some way or other.”

Another justification for SRE is that it will teach teenagers how to use condoms and avoid sexually transmitted diseases. But Dieppe insists, “Studies show that more sex education doesn’t reduce STIs or teenage pregnancies.”

Dieppe proposed that “What really is needed here is teaching moral values, which we seem to be afraid to do.” He added, “What we need and really want is long-term committed relationships” and “the best place for sex is in long-term, lifelong relationships.”