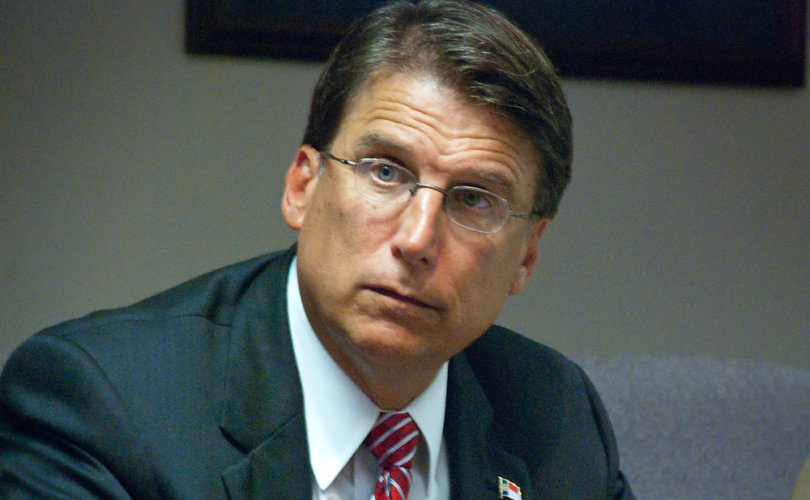 December 1, 2016 (LifeSiteNews) — The recount to decide the North Carolina governor’s race continues despite Democratic calls for Gov. Pat McCrory to concede the race after the lead of his opponent, Attorney General Roy Cooper, surpassed 10,000 votes on Wednesday.

But pro-family advocates say that even if Cooper becomes governor, he has no mandate to crusade for “transgender rights” in the Tar Heel state.

ABC11-TV in Raleigh reported today, “The State Board of Elections had Roy Cooper leading the governor's race by more than 10,000 votes for the first time Wednesday, surpassing the threshold for a mandatory recount.”

“McCrory failed to listen to the majority of fair-minded North Carolinians who know that anti-LGBTQ hatred has no place in their state — and he lost big because of it. Roy Cooper is a powerful voice for equality and has vowed to work to overturn the hateful and discriminatory HB2,” said HRC president Chad Griffin.

HRC, which worked hard to defeat McCrory, is eager to point to an LGBTQ victory after being stunned by Hillary Clinton’s presidential election loss. HRC and the “gay” lobby, like the abortion lobby, were one of Clinton’s most powerful allied special-interest groups. HRC is now has consoling dejected homosexual and transgender activists after Trump’s win and warning of some impending threats to the LGBTQ agenda.

For his part, Attorney General Cooper and his surrogates are calling on McCrory to concede the race, especially after the vote differential crossed 10,000. But McCrory is not backing down. On Thursday, the state Board of Election voted 3-2 along party lines for Durham County to recount its 94,000 votes. McCrory's forces note that he was in the lead until the Durham votes were added at 11:30 on election night.

“As we continue to get deeper and deeper into the results of this election, the number of questionable incidents is worse than we expected:

Whether McCrory loses or comes back to win, his potential defeat was not a referendum on HB2, says a longtime Fayetteville Republican who pointed Lt. Gov. Forest’s comparatively easy electoral win.

In a televised debate with Lt. Gov. Forest, Coleman called for the repeal of HB2, said it is hurting the state’s businesses due to boycotts, and added that HB2 “is making North Carolina a test laboratory for state-sponsored discrimination.”

Forest, referring to the local Charlotte “gender identity” ordinance that spawned the statewide transgender-bathroom controversy and passage of HB2, said, “They said that in the city of Charlotte, you have to take the [gender] signs off your bathrooms … They’re actually a test lab for a radical sexual revolution experiment.”

That is typical of Forest’s robust defense of HB2, said the GOP activist, who spoke on background to LifeSiteNews: “Dan [Forest] was more of a true believer than Pat [McCrory]. He was the one who went around the country, appearing on national media” to defend the law.

“Dan did it more from the heart than Pat did,” he said, while commending McCrory for not caving in to intense liberal pressure. “So if HB2 is that unpopular, why did Forest win by 30 times the vote margin of Cooper, assuming these recount numbers hold up?”