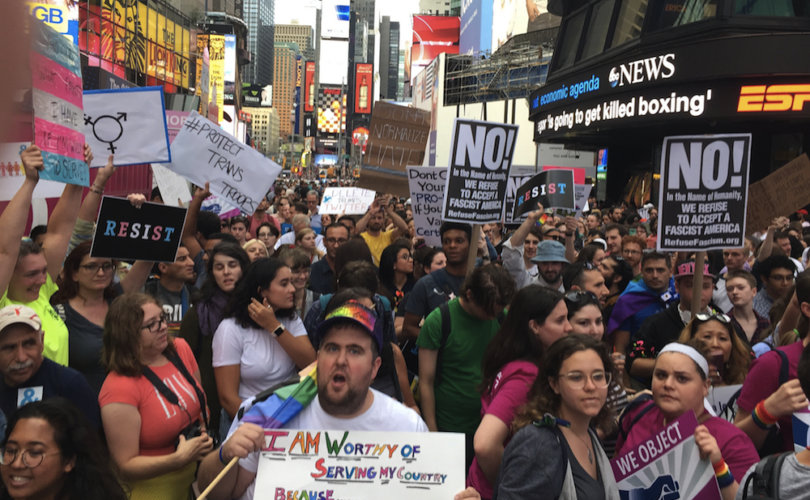 Two major homosexual legal organizations, the National Center for Lesbian Rights (NCLR) and the Boston-based GLBTQ Legal Advocates & Defenders (GLAD), filed a federal lawsuit today in U.S. District Court for the District of Columbia to block Trump's “transgender” military ban, which Trump announced via Twitter on July 26, and for which he issued policy guidance last week.

“The suit, Doe v. Trump, was filed on behalf of 5 transgender service members with nearly 60 years of combined military service,” states a GLAD press release issued on behalf of both homosexual-transgender organizations.

It quotes one of the suit's plaintiffs: “Last year, the Department of Defense announced that transgender people could serve openly … I was very relieved and came out as transgender to my commanding officers, who were supportive. My experience has been positive and I am prouder than ever to continue to serve. I am married and have three children, and the military has been my life. But now, I’m worried about my family’s future.”

Gays hope past is prologue

By focusing on allegedly victimized “transgender” individuals already serving in the military, the LGBTQ groups are using the same legal approach that “gay” activists used to bring down the prior ban against homosexuals in the U.S. military (i.e., the compromise regulations crafted by President Bill Clinton called “Don't Ask Don't Tell,” which barred homosexuals from serving openly). Through multiple hostile lawsuits stressing “civil rights” — including one sponsored by a homosexual Republicans group — LGBT legal activists had the ban on homosexuals in the military policy on the ropes just before Congress passed a repeal bill and Obama signed it into law in 2011.

In the same way, homosexual legal tacticians, with Obama’s help, undermined the Defense of Marriage Act (DOMA), passed with bipartisan congressional support and signed into law in 1996 by Clinton, until it ultimately was overturned by the Supreme Court after Obama and his Attorney General Eric Holder refused to defend the DOMA law.

Social conservatives are delighted with the proposed Trump policy change. Elaine Donnelly, director of the Center for Military Readiness, complained that under the Obama-imposed pro-“transgender” mandates — enacted without congressional action in 2016 — “the armed forces must assume the risks of retaining and recruiting a cohort of persons who are suffering from gender dysphoria — a difficult condition involving confusion about gender identity.

“Gender dysphoria and its treatments are among several psychological conditions that negatively affect personal deployability and mission readiness,” Donnelly wrote.

But activists on the Left were infuriated by Trump’s surprise move to end Obama’s “transgender” military experiment. The ACLU had already pledged to sue to block Trump’s plan. The leftist site Slate gushed over today's lawsuit:

“The suit’s constitutional theories are especially compelling in light of the unprecedented nature of Trump’s policy: Never before has the Pentagon invited a new group of individuals to serve, then broken its promise and purged them from the ranks based solely on political judgment. The due process concerns raised by such a move are heightened by troops’ reliance interest. It is one thing to prohibit transgender people from enrolling in the military in the first place. To invite enrolled trans troops to come out, then expel them for making that decision on the basis of mere animus would seem to push the limits of due process. As a general rule, the government may not extend a guarantee of liberty to individuals and then punish them for relying upon that guarantee. On the merits, the plaintiffs have a strong case.”

But Trump’s tweets announcing his proposed “transgender” ban focused not on individual “rights” but the cost and distraction to the military of accommodating gender-confused individuals: “Our military must be focused on decisive and overwhelming victory and cannot be burdened with the tremendous medical costs and disruption that transgender in the military would entail,” he tweeted.