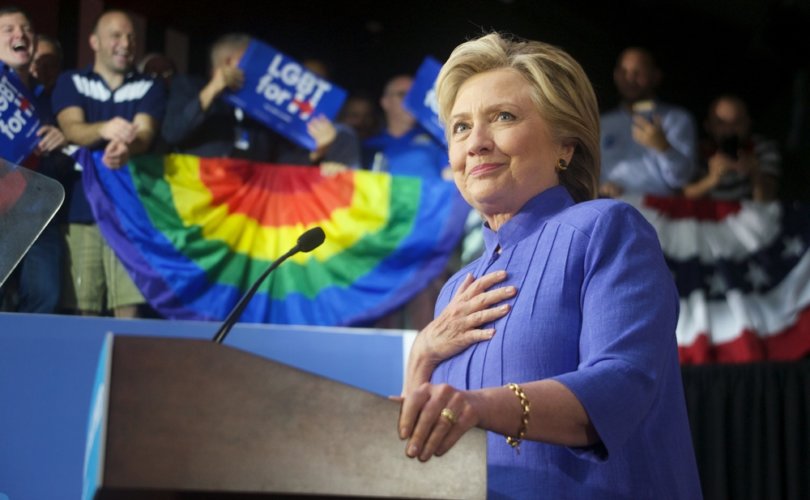 WASHINGTON, D.C., November 4, 2016 (LifeSiteNews) – Homosexual activist groups that routinely work closely with Democrats are going all out to elect Hillary Clinton for president – and she has taken pains through campaign ads and promises to show that she is “all in” for the LGBTQ agenda.

The Human Rights Campaign (HRC)—the nation’s largest homosexual lobby organization—gives overwhelmingly to Democrats: 98 percent Democrats vs. 2 percent Republicans in donations to federal candidates. The group boasts in an October 14 “Turn Out 2016” web post that “a growing and highly engaged LGBTQ voting bloc will play a pivotal role in the presidential, Senate and other down ballot races”:

LGBTQ voters were a crucial piece of the puzzle for President Obama’s victory: in the last election, President Obama received 76 percent of all LGB votes, according to national exit polls. In total, roughly 6 million LGB voters cast a ballot in 2012 — an election President Obama won by just under 5 million votes.

Nevertheless, HRC’s PAC, which has spent $1.3 million on candidates this election season — is using sophisticated get out the vote methods to help Hillary Clinton win on November 8. It is focused on the following six swing states, listed with HRC’s respective LGBTQ voter over-estimates:

In each state, HRC is pushing Hillary Clinton’s support for the “Equality Act,” which would federalize “sexual orientation” and “gender identity” in the Civil Rights code. Clinton, like President Obama, is strongly for the Act—and says passing it is her “highest priority.” But the Act, like most social issues, has received little media attention in this race.

Pro-family advocates stress that the Equality Act could become a powerful tool to negate citizen’s religious and moral liberty—“[paving] over the consciences of those who cannot in good faith condone conduct they believe to be immoral,” in the words of one Christian critic.

In North Carolina—by all accounts a crucial battleground state for both Clinton and Trump—HRC is engaged in a “much more expansive” election effort compared to other states, mobilizing early voting among students and sending activists door-to-door. Its target is HB2, a statewide law that overturned a Charlotte pro-“transgender” ordinance. HB2 is designed to keep men and boys from entering restrooms and locker rooms occupied by women and girls. Human Rights Campaign, like many other LGBTQ groups, calls the law “hateful.”

Clinton has attacked HB2, tweeting, “LGBT people should be protected from discrimination under the law—period,” and linking to this “gay” magazine article. The 2016 election in North Carolina is largely seen as a referendum on HB2, and LGBTQ groups are spending far more in the fight against it than pro-family advocates are to defend it. (Historically, this is nearly always the case in statewide battles over LGBTQ issues.)

There is little doubt among political observers that a President Hillary Clinton would build upon Obama’s pro-“gay” legacy, moving to fully embrace the entirety of the homosexual, bisexual and transgender agenda—which includes stigmatizing opponents as bigots on a par with racists of another era. Obama is easily the most radically pro-LGBT president in U.S. history, and Bill Clinton was the first strongly pro-homosexual president.

In this election, Hillary Clinton often harkens back to her landmark 2012 United Nations speech as Secretary of State promoting homosexuality and transgenderism abroad, saying, “Gay rights are human rights, and human rights are gay rights.”

Homosexual “marriage” has also become a big issue for Clinton ever since she switched positions to support it. Now, like Obama, she is a passionate defender of redefined “marriage”– even appearing in a “marriage equality” video produced by HRC.

Hillary’s husband, Bill, was the first U.S. president to speak at HRC’s annual fundraising dinner in Washington, DC, and she, like Obama, speaks there regularly and counts on the powerful organization’s full support. (See her 2015 HRC speech here.)

Homosexual citizens have voted overwhelmingly for Democrats over the years, but this year there is a new twist as “gay Republican” advocates are more vocal than ever in crusading for the Republican nominee.

Despite Donald Trump’s oft-repeated love for evangelicals—who generally believe Scripture that homosexual behavior is sinful—he has signaled support for “LGBTQ” voters in various ways in this campaign: appealing to the “LGBTQ community” in his RNC acceptance speech; inviting openly homosexual business icon Peter Thiel to speak during prime time on the last night of the Republican convention; and even waving an “LGBTQ For Trump” rainbow flag at one of his boisterous rallies.

Even though the homosexual Log Cabin Republicans failed to endorse Trump, “homocons” (homosexual “conservatives”) are a small but vocal part of the Trump coalition. Breitbart writer Milo Yiannopoulos —who fights the campus Left as an openly homosexual Trump enthusiast — burned a “rainbow flag” to warn fellow homosexuals about the dangers of mass Muslim immigration to the United States.

Nevertheless, Trump’s overtures to homosexuals have not stopped LGBTQ organizations like Human Rights Campaign from cynically portraying him as a violence-prone bully. HRC used the opportunity of supporting Clinton’s $500 million anti-bullying plan to demonize Trump as a man whose “rhetoric continues to foment violence and encourage division among Americans of all ages.”

Ironically, Project Veritas’ undercover videos have exposed how leftist groups working directly with the Clinton campaign and the Democratic Party sent paid agitators into Trump rallies to foment violence. Their stated goal was to stoke the narrative that Trump and his followers are unstable and anti-democratic thugs.