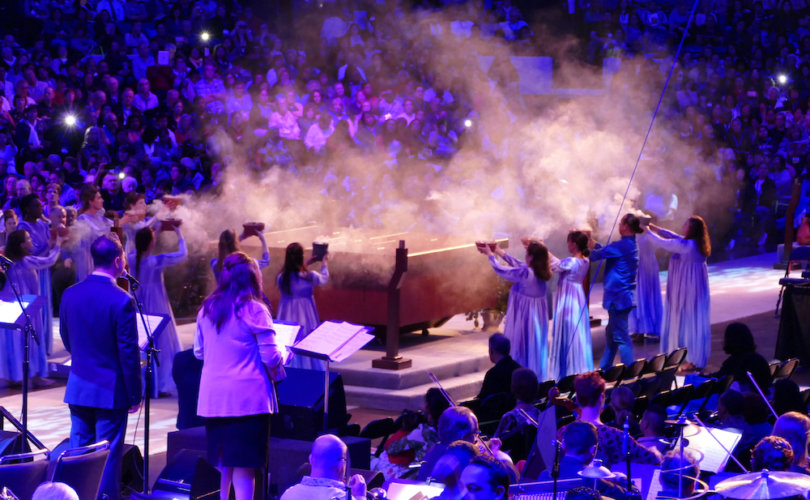 The LA REC is billed as the largest gathering of its kind in the United States, with between 20,000 and 40,000 attendees, and has built a reputation through its presentations for liturgical novelty and dissenting speakers, particularly on LGBT issues.

Catholics have expressed concern and some have protested, beginning decades ago, the problematic offerings.

Of the 10 LGBT-themed workshops on the program this year, nine were categorized as LGBTQ Ministry. Workshop descriptions showed a focus on LGBT acceptance, with no mention of chastity or Catholic sexual moral principles.

Courage, the Church’s sanctioned apostolate for same-sex attracted Catholics that affirms chastity and Catholic teaching, was not part of the massive REC event.

The Catholic Church teaches that homosexual acts are gravely immoral and can never be condoned. Individuals experiencing same-sex attraction, which the Church teaches is “objectively disordered,” are to be treated with “respect” as children of God. And like all children of God, they are called to live chastely.

The Church teaches that sexual relations are reserved for sacramental marriage, which occurs between one man and one woman, mirroring Christ as the bridegroom and the Church as His bride.

The idea conveyed was that to welcome LGBT-identifying individuals into the Church they must be taken as they are and their sexual orientation, which they do not choose, is to be accepted. But this does not include counseling chastity.

Chastity is pushed too much on LGBT persons, REC workshop attendees were told, and this is a double standard from what’s applied to straight individuals. It was not clear if this meant that all persons, LGBT or not, should be free to abandon the Church’s teaching on chastity.

Martin’s Building Bridges book was promoted as a resource, as were other troubling sources such as activist group GLSEN and a project from radical gay activist Dan Savage, alongside the archdiocese’s CMLGP office.

Catholic Brother Christopher Sale of El Monte, California, left the active homosexual lifestyle and came back to the Church, founding the Brothers of Padre Pio. He spoke with LifeSiteNews about the REC, which he felt called to come to because of the dissenting ideas on sexuality being presented there.

“They seem to be celebrating sodomy and that’s irritating to me,” Brother Christopher said.

“When they hear my story, it goes against the grain of what they’re preaching,” he said.

A local Catholic man who requested anonymity expressed concern to LifeSiteNews about the LGBT-affirming programming at the REC; that it had the blessing of Los Angeles Archbishop Jose Gomez, and the harm that it could do in influencing Catholics at the event.

“They’re presenting one side,” he said. “It implies that it’s legit, it’s valid.”

“By not presenting the faithful, orthodox side,” the Catholic gentleman said, “people aren’t hearing it, and they’re forgetting it.”

It’s very disturbing that this is allowed by Church leadership, he continued, and this means the lay faithful must be that much stronger in their faith.

“Of course you won’t be finding any presence of Courage or Encourage at the REC,” a local Catholic woman stated. “No speakers will suggest that those with same-sex attraction can live chaste lives.”

The woman, who also requested her name be withheld, added, “Sadly it’s hard to find Courage groups in places like L.A., where the archdiocese’s own website promotes the very same gay-affirming groups who will be speaking at the REC.”

She quoted St. John Paul II from a prayer vigil at World Youth Day 2000, saying, “It is Jesus that you seek when you dream of happiness; He is waiting for you when nothing else you find satisfies you.”

More information on the Courage apostolate can be found HERE.