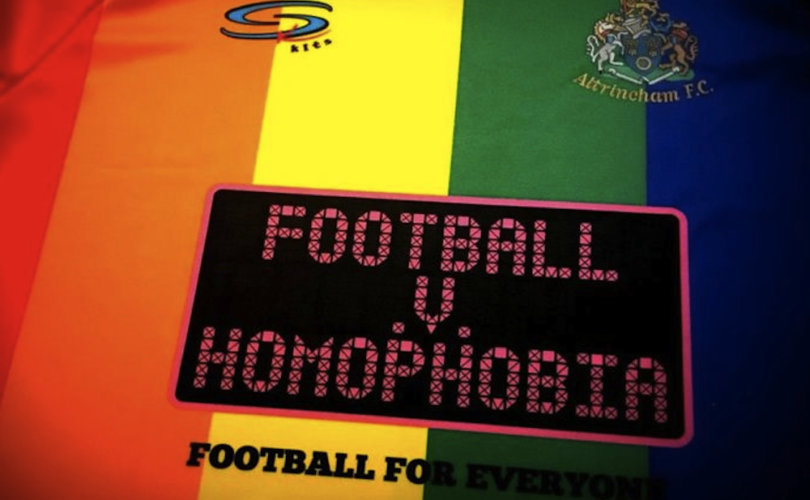 LONDON, February 22, 2019 (LifeSiteNews) — Requiring professional soccer players to wear LGBTQ rainbow symbols violates FIFA and IFAB rules, which prohibit political, personal or religious symbols on game jerseys, according to the Let All Play organization in its report “Let All Play: Yes to soccer, no to politics.”

In an appeal to FIFA — the organization that governs professional soccer around the world — and IFAB — which governs soccer rules — Let All Play argues that the LGBT “rainbow” is a political symbol that is proscribed by FIFA rules. According to the group, “The Laws of the Game from the International Football Association Board (IFAB) state, “Equipment must not have any political, religious or personal slogans, statements or images” (Law 04.5).1 FIFA’s Equipment Regulations add that this includes a ban on any ‘political or comparable symbol.” (Article 8.3).2

“FIFA,” said the report from Let All Play, “needs to enforce its own rules” and “guarantee all are welcome” in the world’s most popular sport.

“It's not subtle, but it's loud and gets the message across.”

“Not everyone agrees with the causes represented by the LGBT rainbow,” Let All Play said on its webpage, which added that players who have refused to wear the LGBT rainbow in international and league play “have been harassed and now risk being disadvantaged in their careers.” It called on FIFA and IFAB to judge players on the basis of their soccer skills rather than their politics or religion.

We're live at the Altrincham match over on our Instagram today!

“No one should be required to wear a political symbol with which they disagree,” the group asserted. “Those who disagree with the politics represented by the LGBT rainbow include some religious believers as well as those who oppose the threat that transgenderism poses to soccer for girls and women. These individuals and others should not be excluded from soccer just because they hold opinions that are at odds with LGBT advocates and vice versa.”

One of the latest teams to adopt the rainbow gay liberation flag is Altrincham FC of England. Teammates wore rainbow kit to a Feb. 16 match on their home turf. Among those attending the match was Baroness Susan Williams, who serves as UK Minister for Equalities. The Government Equalities Office's Twitter account proclaimed the shirt in recognition of February, which happens to be LGBT History Month in the United Kingdom.

On the team’s Twitter account, a tweet began, “Not all stripes are straight … ” “We believe it will be the first time anywhere in the world that a senior football club has worn a kit solely modeled on the LGBT Pride Flag,” said the National League North outfit's director Bill Waterson in a statement. “Altrincham will, therefore, be creating a small moment of football history.”

The gay pride flag was designed by American gay rights campaigner Gilbert Baker in the 1970s. The political importance of the pride flag was not lost on Baker, who according to Let All Play, said, “For the past almost 40 years, the rainbow flag has stood as a politically powerful, meaningful, and also aesthetically effective symbol.”

Rainbow symbols have been evident in the past for other football clubs Rayo Vallecano and CD Guadalajara of Spain worn rainbow sashes in 2015, and Major Leagye Soccer players and the national team of the United States have worn gay pride shirt numbers.

Let All Play argues that FIFA should discipline teams that place political symbols, as well as the LGBT rainbow, on any part of a player's kit, protective gear, or captain's armband. It also called on IFAB to revise soccer rules to exclude political symbols on corner flags and all other field and technical area equipment used on the field and immediate surroundings. The report noted that FIFA has disciplined teams during the 2018 qualifying matches for the FIFA World Cup. Countries ranging from Albania to Wales were cited for using political symbols, political displays, non-approved armbands, and discriminatory banners.