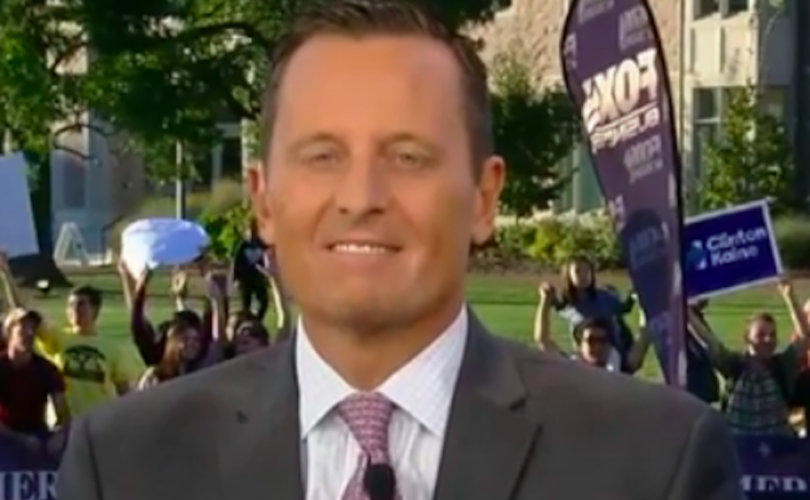 November 16, 2016 (LifeSiteNews) — President-elect Donald Trump is considering appointing open homosexual Richard Grenell as the U.S. ambassador to the United Nations, according to a Fox News report citing a source “familiar with transition planning.”

Grenell advocates homosexual “marriage” as a “conservative” issue, criticizes “loud religious right activists,” and touts Trump’s uniquely pro-LGBT credentials as a Republican. If appointed, he would become the “first openly gay person to hold a cabinet-level foreign policy post,” Fox News reported. (Under the Bush I and Bush II administrations, the UN Ambassador was not a cabinet-level position.)

The potential appointment of Grenell caused Christian conservative Bryan Fischer of American Family Association to tweet: “Heads up to conservatives: we'll have to fight Trump as hard on the homosexual agenda as we would have had to fight Hillary.”

It is not known how seriously the Trump team is considering Grenell for this key slot — one of the most visible positions in the foreign policy apparatus, behind U.S. Secretary of State. The late, tough-minded Jeane Kirkpatrick gained fame at U.S. Ambassador to the UN under President Reagan.

Grenell is a fixture on Fox News espousing his conservative foreign policy worldview. He has held various communications positions in different levels of government and “in 2001, he was appointed by President George W. Bush to serve as Director of Communications and Public Diplomacy for the United States Ambassador to the United Nations,” according to his online bio.

He regularly criticizes President Obama’s foreign policy as too weak on issues like destroying ISIS terrorists and standing with America’s strong ally, Israel. However, social conservatives question if and how he would change the Obama legacy of promoting homosexualism and transgenderism as a “human right” abroad.

In 2012, Grenell resigned shortly after being hired as a spokesman for then-presidential candidate Mitt Romney after some ill-advised Tweets surfaced and GOP conservatives criticized his appointment as an openly homosexual adviser. The Washington Post reported that Grenell “had a reputation as a polarizing figure among press who worked with him in the past, with some U.N. reporters describing Grenell as overbearing and untrustworthy.”

Many wonder if President-elect Trump will continue Obama’s aggressively pro-LGBT foreign policy. Under Obama and his then-Secretary of State Clinton, the United States enforced a policy — announced in a Clinton UN speech — of “gay rights are human rights and human rights are gay rights.” While there is widespread consensus that systematic hatred and violence against homosexuals — or anyone — is a human rights issue, under Obama the idea was applied much more widely — pushing countries to embrace homosexual “marriage” (legal in the United States only since 2015), and using U.S. foreign aid to punish poor nations into abandoning any law construed to be “anti-gay” by liberal Western standards.

Hence in Jamaica, U.S. and European Union diplomats and bureaucrats brought pressure to bear against the tiny Caribbean nation to repeal its “anti-buggery law.” (Buggery is an old British term for sodomy.) However, the law remained on the books as Jamaicans rallied against what many considered to be American “cultural imperialism.” In 2015, one poll found that an amazing 91 percent of Jamaicans opposed repeal of the anti-buggery law.

Another Obama first that drew much criticism from countries where homosexuality is more widely regarded as immoral than in the United States was the practice of flying the homosexual/bi/transgender activist “rainbow” flag at U.S. Embassies abroad on LGBTQ activist celebration days like IDOHOT (International Day Against Homophobia, Transphobia and Biphobia) — and after the terrorist slaughter in Orlando, Florida.

Dr. Wayne West, a prominent pro-family advocate in Jamaica as chairman of the Jamaica Coalition for a Healthy Society, told LifeSiteNews regarding the possibility of Grenell getting the UN post: “I am disappointed. The United Nations is one of the primary political advocates for the wholly illogical LGBTQ+ ideology. I hope that President Trump does not follow President Obama’s path of cultural imperialism.”

Grennell celebrates the election of Trump as the most pro-LGBT Republican presidential candidate in U.S. history. In a column, excerpted below, he used Trump’s holding up a pro-gay “rainbow flag” from the crowd at one of his rallies to highlight Trump’s difference with past GOP front-runners beholden to “loud religious right activists’:

“On Sunday [October 30, 2016], at a rally in Colorado, Mr. Trump proudly held up a rainbow flag with the words “LGBT for Trump” written on it to a cheering crowd of thousands. It was an historic moment for gay equality and the Party of Lincoln as the 2016 GOP nominee for President of the United States held high the flag for gay equality. No other Republican Presidential nominee in history has embraced the LGBT community in such a loud and proud way …

“Mr. Trump’s easy and consistent embrace of the LGBT community is rarely highlighted by the same media crowd. In fact, some liberal reporters have even tried to falsely claim that Trump is a traditional Republican nominee on the issue of gay equality.

“While it has been mostly unreported, Mr. Trump has embraced the LGBT community like no other GOP nominee in history. His rainbow flag waving in Colorado was only the latest sign of his continued support for gay equality. Whatever happens on November 8, 2016, in the presidential race, Mr. Trump has forever changed the Republican party’s support for LGBT equality and future Republican leaders will have a difficult time not meeting the new standard.”

Like many libertarians and pro-LGBTQ Republicans, Grenell advances the notion of legal homosexual “marriage” as a conservative issue. In a Washington Times column, he simultaneously extolled individual rights against big government and a Supreme Court ruling — the 2015 Obergefell decision that Trump now says is “settled” law — which imposed homosexual “marriage” on 31 states whose citizens had previously voted to preserve marriage as between man and woman. Writes Grenell:

“Consistent conservatives should frame their views in accordance with the fundamental belief that individuals, not governments, have the right to determine the course of their own lives …

“But when the topic of gay marriage arises, some conservatives have not been consistent. The debate on marriage within the Republican Party has been hijacked by those who wish to dictate their beliefs onto others. Rather than professing consistent, conservative beliefs, some within the party have taken to advocating for a remarkably liberal, totalitarian approach.”

Most pro-family conservatives have warned that the Obergefell ruling — combined with aggressive LGBT lawsuits — has created a “liberal totalitarianism” of sorts that requires all citizens to participate in sin-based “marriages” regardless of their moral and religious beliefs about homosexuality.

On November 13, Grenell retweeted this tweet, celebrating that “Trump will be the first president to enter office unopposed to gay marriage and rights. Most pro LGBT Incoming President ever.”