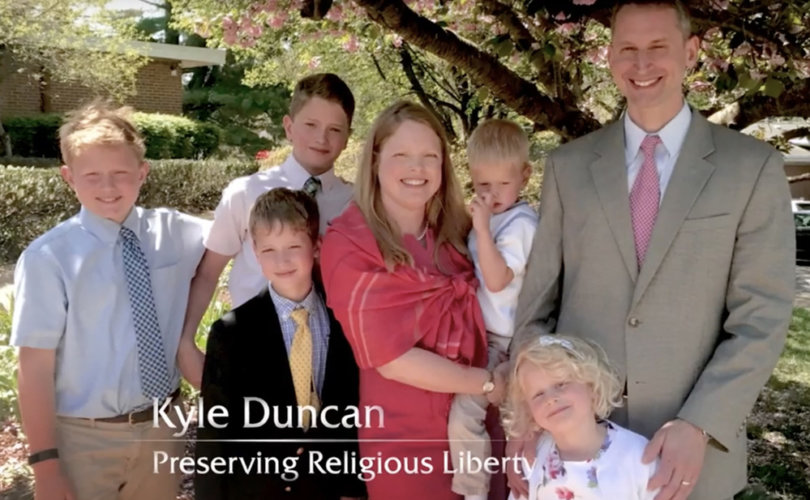 After the U.S. Supreme Court ruled in favor of same-sex marriage in 2015, Kyle called the decision an “abject failure” that “imperils civic peace” and which “raises a question about the legitimacy of the court.”

Duncan, age 46 from Louisiana, has had a stellar career standing up for the immutable definition of marriage, standing against the infiltration of gender identity ideology in our courts, protecting the unborn, and defending religious liberty.

Yet this is precisely why progressives in general––and LGBTers in particular––have vehemently opposed his nomination by the Trump Administration every step of the way, and why now they are reacting to his confirmation so viscerally.

“Quite simply, Duncan is bughouse on the subject of gay people and trans people and any other person whose sexuality gives Duncan the jittery Jesus vapors,” wrote commentator Charles P. Pierce in Esquire Magazine.

Washington DC’s behemoth pro-gay and transgender lobbying organization, The Human Rights Campaign (HRC), issued a hyperbolic statement in advance of the Senate vote, declaring Duncan to be a “dangerous extremist” whose “career of attacks on LGBTQ people makes clear he is incapable of this fundamental responsibility. He is unfit to serve and the Senate must reject his nomination.”

Duncan’s record of anti-LGBTQ advocacy is alarming. He represented the Gloucester County School Board in their case against Gavin Grimm, the transgender high school student whose restroom access was restricted based on his transgender status. He advocated on behalf of Louisiana in the state’s bid to uphold its same-sex marriage ban and wrote an amicus brief for Louisiana and 14 other states arguing their same-sex marriage bans did not undermine the decision in U.S. v. Windsor, the landmark Supreme Court case that required the federal government to recognize the marriages of same-sex couples. He also argued that a couple married in New York could not have their names added to the birth certificate of a child they adopted in Louisiana because the state did not recognize same-sex marriages at the time and its adoption statute does not allow unmarried couples to adopt.

Perhaps most famously, Duncan was the lead attorney who successfully argued on behalf of the owners of Hobby Lobby before the United States Supreme Court against Obamacare’s contraception mandate, thereby protecting the conscience rights of business owners.  While this was hailed as a huge victory for religious liberty, progressives viewed this as a denial of adequate health insurance to female employees because it allowed the exclusion of birth control coverage.

Duncan has also successfully defended abortion restrictions on behalf of the state of Louisiana.

“Time and again, Mr. Duncan has been on the wrong side of justice,” asserted liberal New Hampshire Senator Elizabeth Warren.

Coons continued, “[Duncan] also was an active litigant in the HB2 bathroom law in North Carolina and has characterized transgender individuals as having psychological pathology and has said many other disturbing things about transgender rights, about same-sex marriage and about the legal theories underpinning what have been, I think, significant advances in these two areas.”

Family Research Council president, Tony Perkins, welcomed the Senate confirmation of Duncan, saying, “President Trump continues to keep his promise to appoint constitutionalists to the courts,and now the Senate is following his lead in confirming Kyle Duncan to the Fifth Circuit Court of Appeals. The president has been very clear about the type of judges that he would appoint: judges who will interpret the Constitution and laws according to the plain meaning of the words written.”

Former Reagan Administration Attorney General Ed Meese has called Duncan “a legal powerhouse from Louisiana with a history of championing religious freedom” and an “excellent pick for the 5th U.S. Circuit Court of Appeals.”

Kyle Duncan has most recently been a partner in Washington DC’s Schaerr-Duncan law firm where he has scored major victories in high-profile litigation, setting landmark legal precedents.  Previously he was general counsel of the Becket Fund for Religious Liberty, and from 2008 to 2012, Duncan served as Louisiana's first Solicitor General.