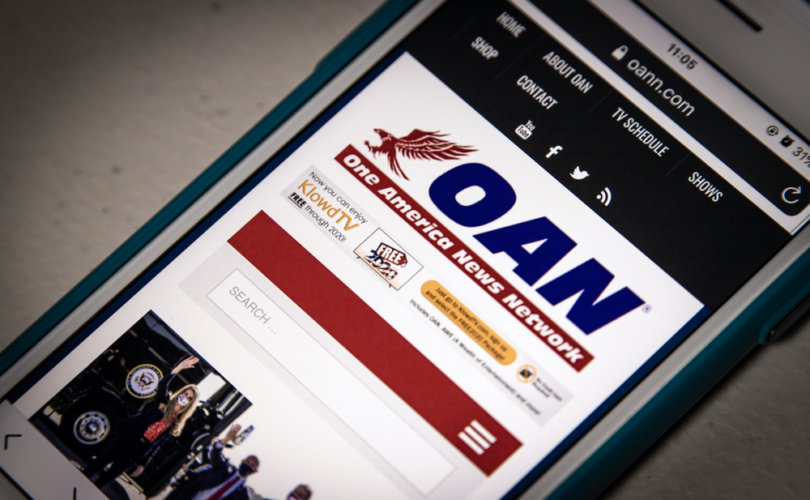 (LifeSiteNews) — DirectTV, which is owned by AT &T, announced it will no longer carry One America News Network (OANN) when the media company’s agreement expires in April.

The company said the decision is a result of an “routine internal review.”

“We informed Herring Networks that, following a routine internal review, we do not plan to enter into a new contract when our current agreement expires,” a spokesman told the Associated Press.

The conservative news network has covered election integrity issues, leading some liberal activist groups to call for the channel to be removed from DirectTV. The AT&T-owned television network provides 90% of OANN’s revenue.

The letter cited AT&T’s alleged role in funding OANN and offered to “brief” the company on why it should cancel the conservative news organization.

“We welcome the opportunity to brief the companies on the extent of OANN’s role in undermining democratic institutions and public health and safety at every turn,” the letter said. “We call on DIRECTV to stop carrying OANN and for AT&T to do everything in its power to denounce and remove OANN from its lucrative platform.”

Liberal activist group MeidasTouch.com gave credit to its followers for getting OANN canceled.

“You made this happen. Thank you to everyone who stepped up and made your voices heard and thank you AT&T and DirecTV for listening,” the leftist activist group wrote on Twitter on January 1 14.

You made this happen. Thank you to everyone who stepped up and made your voices heard and thank you AT&T and DirecTV for listening. pic.twitter.com/214jmwGAyW

Meidas Touch has repeatedly posted about OANN on Twitter for at least a year, urging it to be banned by the Apple Store and other app stores. It used incendiary language to describe the January 6, 2021 protest at the Capitol.

“Now that Parler is banned from the App Store, we call on @Apple to ban Newsmax and OANN apps immediately for spreading disinformation that led to the terrorist attack against the United States,” MeidasTouch said on January 9, 2021. “Newsmax and OANN’s apps and social media accounts should also be banned across all platforms.”

Sleeping Giants, a group that tries to get advertisers to pull money from ads on conservative sites, also has been attempting to get OANN canceled.

“I know it’s kind of a tall ask for cable providers to keep an eye on what they’re distributing,” Matt Rivitz told Forbes in November 2020, for an article about how DirecTV could drop OANN. “But ultimately it comes back to them; if they’re accepting money for it, then they have some responsibility.”

The company operates by sending tweets and trying to shame companies into dropping advertisers on platforms such as Breitbart.

“This is extremely interesting news and it could be a sign of things to come,” Sleeping Giants said in a celebratory tweet on January 14. “The cable providers are just as culpable as the network themselves for the spread of extremism, antivaxx conspiracies and health disinformation.”

President Donald Trump spoke out in support of OANN at a rally in Arizona on January 15 and suggested a boycott of AT&T.

“Maybe what we should do is not use AT&T,” Trump said. “All I can tell you is the people that are telling the truth in America like One America News are being threatened.”

Sen. Rand Paul (R-KY) said he has canceled his DirectTV subscription and urged others to do the same.

“I just cancelled my home Direct TV,” Paul said on January 17. “Why give money to people who hate us?”

.@DIRECTV is cancelling @OANN so I just cancelled my home Direct TV. Why give money to people who hate us?

“Thank you, Sen. Paul for standing up for freedom of press and diversity in news,” OANN replied.