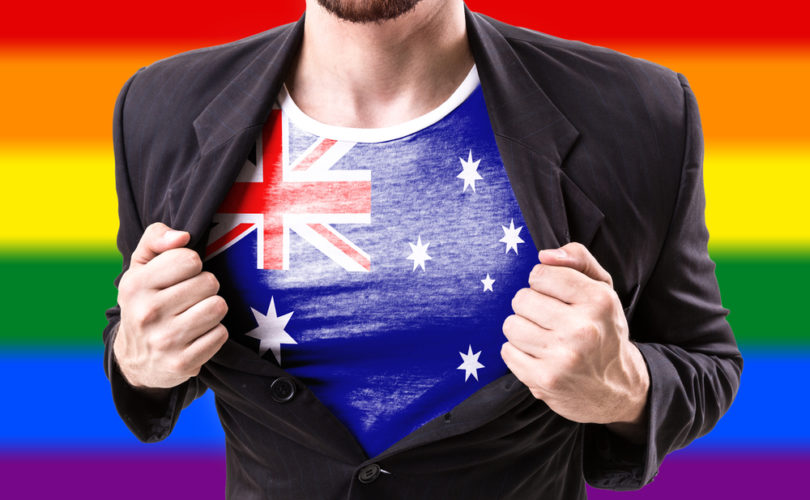 March 18, 2019 (LifeSiteNews) — The Australian Greens party has hardened its stance on the LGBT agenda in view of the 2019 federal elections to the Senate on May 18 and the House of Representatives on November 2.

The long list of “LGBTIQ+” policies the Greens want to implement includes a commitment to end an existing program funding the presence of religious chaplains in public schools and to use the money in favor of “secular” and “inclusive” support for “diverse” students.

Other anti-religious initiatives are included on the list, in particular “the removal of religious exemptions from anti-discrimination laws.” Religious and private schools are especially targeted.

The Australian Greens are a nominally environmentalist organization that started with “ecological” concerns. From its creation in 1992, the left-leaning party not only campaigned for “sustainability” but also for “social justice,” participative democracy and pacifism, in the vein of the Green movement that had objectively supported the Soviet Union from the 1970s onward.

Through the years, the Australian Greens added other concerns to their list, favoring heavier taxation, socialist policies, and all the facets of the culture of death, including the liberalization of drug use and the legalization of euthanasia and same-sex “marriage.”

From compulsory sex education about “the diversity of sexuality” to absolute rights for gender identification as described in their “Sexual Orientation, Gender Identity and Intersex,” the Australian Greens massively support the removal of all restrictions and “discriminations” in the field, including restrictions on medical hormone treatment for young people.

Teenager requests to the courts for permission to start hormone treatment rose 360 percent between 2013 and 2017.

One can only wonder how this equates with the defense of nature and the environment.

The Australian Greens' extreme “pro-LGBTQI+” program would be anecdotal if the party were not on the rise. With nine of 76 senators in the Senate since 2016, it plays a decisive role there. The leading Liberal/National Party has 34 senators, closely followed by the opposition Australian Labour Party (31 seats). Neither of the larger parties has a majority.

The Greens made their entry into the House of Representatives in 2010 and currently have only one member of the 150, but their electorate is also on the ascent (10.23 percent of the vote at national level in 2016).

This means that their current proposal to scrap school chaplains might well find support in the larger parties.

The school chaplains’ program took over in 2017 after federal funding for the liberal “Safe Schools” program ran out under conservative pressure, and several states and territories decided not to support it on a local basis. In May 2018, Australia’s federal budget announcement earmarked 247 million Australian dollars (about $175 million US) to finance religious chaplains in public schools, with “a special new anti-bullying” focus. The federal grant was made permanent for the next four years.

At the time, the “Star Observer,” a pro-LGBT media active in Australia since 1979, quoted critics of the move who “said that the very religious leaders who are likely to have opposed Safe Schools and marriage equality” would “now be the chaplains delivering programs intended to prevent homophobic bullying.”

A massive majority of school chaplains are Christian.

The Australian Education Union immediately said the funding would have been better spent, and are in fact “desperately needed” for professional development of principals and teachers as well as “student well-being programs.” The AEU is likely to support The Greens' move.

Last June, liberal (as opposed to left-wing socialist) Scott Morrison took over as Australia's Prime Minister on a climatosceptic platform and now leads a minority government. But he also pledged to take action against “anti-LGBT” discrimination in faith schools where students and teachers may currently be expelled because of their “sexual orientation” under religious exemption from anti-discrimination laws.

These exemptions have been criticized by NGO’s such as Amnesty International and other “Human rights” groups.

Under pressure from The Greens and with the promise of bipartisan support from Labor, Morrison said in October that Attorney General Christian Porter has been charged with drafting legislation to put an end to religious exemptions “within weeks.”

For the time being, however, no steps have been taken to implement such measures.