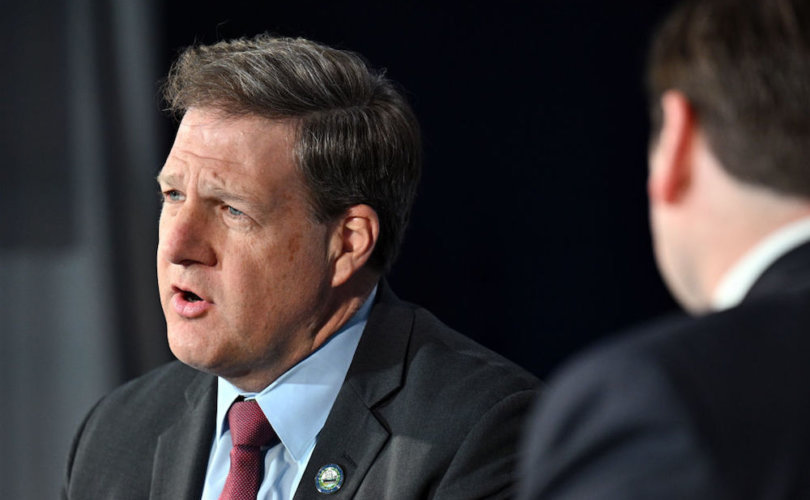 CONCORD (LifeSiteNews) – Liberal Republican Gov. Chris Sununu drew the ire of New Hampshire pro-lifers on May 27 with his veto of legislation that would have repealed a Granite State law empowering abortion centers to establish 25-foot “buffer zones” on public property to prevent pro-life advocacy, despite the facts that the law has never been invoked and Sununu had previously pledged to repeal it.

New Hampshire Right to Life (NHRTL) explains that the law “is unnecessary because existing law already protects clients and workers at abortion clinics,” because “a buffer zone has never been implemented in NH after 7 years,” and “not one NH conviction was mentioned at the hearings” about the matter.

In 2016, Sununu expressed written support for the “common sense” repeal, and this year the state legislature passed legislation to repeal the law. On May 27, however, Sununu vetoed the bill, writing that in “the eight years since this law was originally enacted, we know of no instance where an individual or group has been harmed by it. As a result, I am not looking to make any changes at this time.”

“If Sununu is willing to go back on his word on this, then what else?” asked NHRTL president Jason Hennessey. “I don’t want to think that any special interest that spends the most on ads/lobbying can compromise the Governor’s integrity, but it appears that way since he knew this was a bad law when he committed to repealing it. We hope and pray that the Sununu Sidewalk Ban won’t be used to stop peaceful volunteer sidewalk advocates from offering free support to women and children in need.”

Pro-abortion buffer zones persist in part because, last year, the U.S. Supreme Court refused to hear Bruni v. City of Pittsburgh, which concerned a 2005 ordinance requiring pro-life activists to stay more than 15 feet away from the entrances to abortion facilities, effectively keeping pro-lifers from communicating with women entering or exiting the building to appeal to them to choose life or offer them assistance with abortion alternatives.

While agreeing that rejecting the particular case was valid given “it involve[d] unclear, preliminary questions about the proper interpretation of state law,” conservative Justice Clarence Thomas urged his colleagues to “take up this issue in an appropriate case to resolve the glaring tension in our precedents,” because such laws “often impose serious limits on free speech.”

Sununu disappointing New Hampshire conservatives is not unprecedented. Last month, he also signaled he would veto a bill to prevent activist teachers and school administrators from hiding student developments related to sexual attraction and “gender identity” from the students’ parents, effectively killing it.