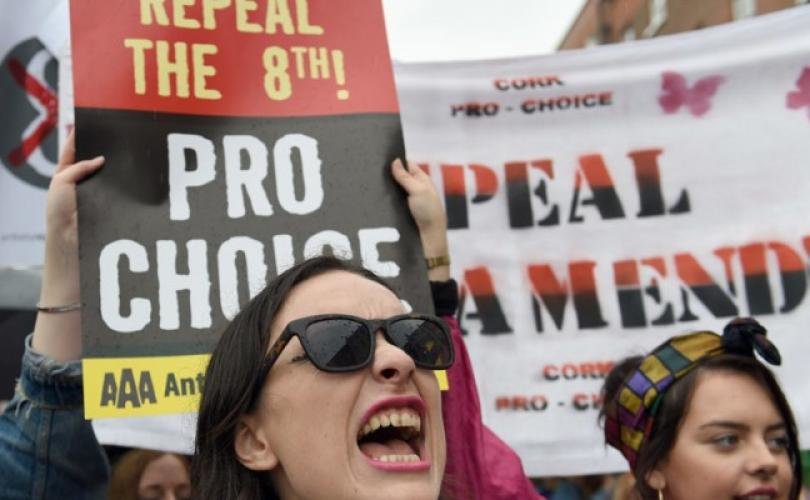 IRELAND, May 11, 2018 (LifeSiteNews) – According to a small association of Irish Catholic priests, Catholics should vote on whether to legalize abortion based on their “conscience” and as priests, “we are not best placed to be in any way dogmatic on this issue.”

A Dublin priest along with pro-life advocates in Ireland told LifeSiteNews this group of priests is “usually first in line to attack the Catholic Church and her teachings” and not at all representative of the faithful in Ireland, including priests and bishops.

The Association of Catholic Priests (ACP) in Ireland issued this statement on May 5, saying “we do not wish to tell anyone how they should vote” and that “a vote cast in accordance with each person’s conscience, whatever the result, deserves the respect of all.”

The priests prefaced this by claiming, “As an association representing Catholic priests we fully endorse the Catholic teaching that all human life, from beginning to end, is sacred, and that every human person shares in the fundamental right to life.”

But they went on to assert:

We are also aware, and are constantly reminded in our ministry, that human life is complex, throwing up situations that are more often grey than black and white and that demand from us a sensitive, non-judgemental, pastoral approach. Also, as leadership of an association made up of men who are unmarried and without children of our own, we are not best placed to be in any way dogmatic on this issue.

We do not wish to tell anyone how they should vote. But we encourage both ourselves and any citizens who may be interested in our viewpoint, to do the best we can to acquaint ourselves with exactly what we are being asked to vote for, and what the possible consequences of our vote may be. Having done that to the best of our ability, and following it with the, often painful and difficult, task of consulting our conscience, let us cast our vote.

On May 25, the Emerald Isle will vote on whether to repeal its Eighth Amendment, which guarantees unborn children the right to life. This group of priests condemned the practice of allowing representatives from the “No” to abortion campaign speak during or after Mass, because “as there are, among faithful, Church-going Catholics, a great variety of opinions on this vote, we believe this is inappropriate and insensitive and will be regarded by some as an abuse of the Eucharist.”

“We believe it would be better if this practice ceased for the rest of the campaign,” they said. “We wish the Irish people well in this immensely important decision awaiting all of us. The leadership of the Association of Catholic Priests will have no further engagement in this debate.”

Complaints from leftists in the Church about “abuse of the Eucharist” are particularly rich given that they are typically the ones pushing for liturgical abuses in the forms of Communion in the Hand, female altar boys, ignoring the rubrics of the Mass, and diminishing the priesthood by employing a large number of lay people to distribute Holy Communion.

Just as it is convenient for leftists to quote parts of the Bible to further their cause – even though they don’t actually care what the Bible teaches, and normally would be busy castigating it – so too it is convenient for liberal-minded priests to pretend to care about liturgical norms when it suits their agenda, though normally they are the ones complaining about the Church’s “rigid” rules on the subject.

(The U.S. equivalent of this “Association of Priests,” for example, is known for its elderly priests who wear street clothes, enjoy “modern” liturgies, and advocate for a number of liberal sacramental changes.)

Dublin-based Father Terence Crotty explained to LifeSiteNews that the ACP has “no representative status for Irish priests as a whole.”

“Much has been made of the ACP request for no pro-life talkers at Mass, because, of course, it chimes with the government and media campaign to introduce abortion, so these forces are glad to hear it and publicise it,” said Crotty. But “it is worth remembering that the active membership of the ACP is absolutely tiny. I'd imagine you're talking about, at the very most, a few dozen priests out of a population of around about 4,700 Irish priests (going by a 2012 figure in given the Journal.ie – a bit lower now).”

“We are doing our bit for the referendum with a 40 hours devotion for the protection of unborn children,” Crotty told LifeSiteNews. “I think we are much more typical of the reaction of the Irish clergy than the ACP. Several other churches are doing the same or similar around Dublin. In my experience, Catholics of whatever leanings are right behind the no vote in this referendum.”

“Faithful Catholics continue to be horrified by statements that come from the so-called ‘Association of Catholic Priests,’” said Lisa Hare of Human Life International Ireland. “Their recent statement on the 8th Amendment is no exception. This group are usually first in line to attack the Catholic Church and her teachings.”

They “cause much scandal to the Body of Christ,” she told LifeSiteNews via email. “For the ACP to do anything other than UNAMBIGUOUSLY support the right to life of EVERY unborn child in Ireland in EVERY circumstance, demonstrates just how far they have walked away from Christ and his church.”

Human Life International Ireland is holding a National Day of Reparation in various Irish locations on May 13.

“The moral gravity of procured abortion is apparent in all its truth if we recognize that we are dealing with murder and, in particular, when we consider the specific elements involved,” wrote Pope St. John Paul II in Evangelium Vitae. “The one eliminated is a human being at the very beginning of life. No one more absolutely innocent could be imagined.”

Pope Francis, too, has repeatedly condemned abortion throughout his papacy.

Martin Long, a spokesperson for the Irish Conference of Catholic Bishops, referred LifeSiteNews to a comments Bishop Dermot Farrell made to RTE in response to the ACP statement.

“You need to look for that to answer the quote,” he said.

According to the May 5 RTE report:

Responding to the statement from the ACP, Bishop Dermot Farrell of the diocese of Ossory said there is a tradition in the Catholic Church, down through the years, of lay people preaching in church on various issues including the right to life and other social issues.

He said these lay people complement priests and are not there to replace them. He also welcomed the ACP's statement which defends the fundamental right to life.

Asked if campaigners from the opposite side would be allowed into church he said no, as the Catholic church was defending its own teaching which is the right to life of the unborn.

Bishop Farrell said the church was not there to present sides of a case but explain its central teaching on the right to life.

A spokesperson for the Catholic Communications Office confirmed that that Bishop Farrell was speaking in a personal capacity and not on behalf of all the hierarchy.

Long told LifeSiteNews the Irish Catholic bishops are having their summer meeting in June.

The Irish Catholic bishops have been encouraging voters to reject abortion and save the Eighth Amendment. The new bishop of Galway, Kilmacduagh, and Kilfenora gave a pro-life homily at his installation Mass in February 2018.

Bishops Denis Nulty of Kildare and Leighlin, John Buckley of Cork and Ross, and Alan McGuckian of Raphoe all issued letters calling on parishioners to vote no on May 25.

“Nothing is as important for the future of our shared humanity as the right to life,” wrote Nulty.

Archbishop Eamon Martin, the archbishop of Armagh and Primate of All Ireland, used his 2018 pastoral message to promote the pro-life message.

“In the name of ‘modernising healthcare’, the [government] Committee proposes a very liberal abortion regime, including unrestricted access to abortion up to twelve weeks, and, thereafter during pregnancy, very broad grounds for abortion and access to abortion,” he wrote.

“We should focus our energies and resources on making Ireland the most welcoming country in the world for a woman and her baby in the womb,” Martin declared. “Our doctors, nurses, midwives and other care professionals have already helped to earn Ireland’s place as one of the safest countries in the world for mothers and their babies during pregnancy. Ireland now has an opportunity to give even stronger witness that: we value all life equally; we care for the weakest and smallest, the strongest and healthiest, the youngest, the oldest, and the whole wonderful and beautiful spectrum of life in-between.”

Priests can’t have an opinion on abortion?

One of the claims the ACP made as to why it won’t take a “dogmatic” stance on abortion is “as leadership of an association made up of men who are unmarried and without children of our own, we are not best placed to be in any way dogmatic on this issue.”

Jesus Christ was also an unmarried man with no children of his own, but he had spiritual children. As a father in a spiritual sense, he had the duty to be dogmatic about protecting the little children from harm's’ way, be it supernatural harm (heresy) or natural harm.

Priests are ordained to be representatives of Jesus Christ on Earth, and they have a duty to uphold and preach the commandment “thou shalt not kill.”

Stephen Kokx contributed to this report.