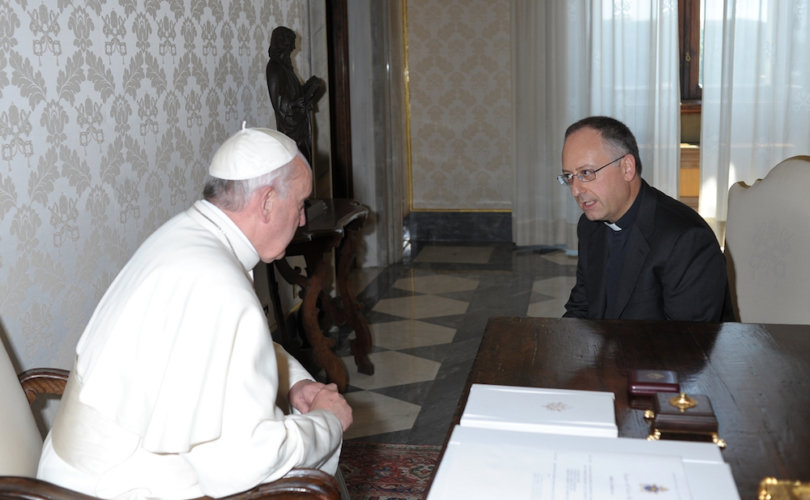 Fr. Antonio Spadaro is so close to the pope that pundits describe him as Francis’ ‘mouthpiece.’

July 29, 2016 (LifeSiteNews) — Fr. Antonio Spadaro, SJ, editor of the Rome-based Jesuit magazine La Civiltà Cattolica, has been described as Pope Francis’ “mouthpiece,” with pundits giving his interpretation of the papal program a high level of authority, because of his close ties to Francis.

In a new interview at World Youth Day, Fr. Spadaro gives details on his relationship with Francis that help paint a picture of how attuned he is to the mind of the pope.

The fortnightly journal is reviewed by the Vatican’s secretary of state before publication, and is seen as reflecting the “official” views of the Holy See.

Spadaro, in particular, first came into the public eye when he published an exclusive interview with the pope in September 2013 that spread like wildfire across the globe. In it Francis offered some of his first public thoughts on the state of the Church and his priorities. Pro-life and pro-family advocates remember it most especially for the pope’s comments on abortion and same-sex “marriage”: “We cannot insist only on issues related to abortion, gay marriage and the use of contraceptive methods. … The teaching of the church, for that matter, is clear and I am a son of the church, but it is not necessary to talk about these issues all the time.”

Under Spadaro’s direction, La Civiltà Cattolica has consistently asserted during and after the Synod of the Family that the Church is evolving toward allowing Communion for the divorced and remarried.

In his interview with Aleteia, Spadaro, who has been at the helm of La Civiltà Cattolica since 2011, related that shortly after being elected pope in March 2013, Argentinian Cardinal Jorge Maria Bergoglio called him on his cell phone.

The two men then spent “three long afternoons” together as Spadaro interviewed the new pontiff. The priest noted further that “usually, I accompany the Pope on his travels, and I was also with his appointment as a member of two synods dedicated to the family.”

Vatican watchers have since come to regard the 50-year-old Italian priest as a reliable bellwether of the Holy Father’s thinking and intended course of action, with Canadian priest and writer Father Raymond de Souza going so far as to describing Spadaro as a “mouthpiece of Pope Francis.”

Spadaro did not demur when Aleteia interviewer Konrad Sawicki described him as “closer to Pope Francis than most people in the world.” He revealed that the pope has neither cell phone nor computer, and took it upon himself to explain why Francis enjoys posing for “selfies.”

An expert in cyber-theology, that is, the Church’s response to the Internet, Spadaro observed that the Holy Father’s openness to “selfies” reveals his “deep pastoral sensitivity.” In a selfie, “the separation disappears” between photographer and subject.

Spadaro also suggested that Francis’s decision to wash the feet of convicts, women and Muslims during Holy Thursday liturgy can be seen as a “symbolic reference to the actual identity of Europe.”

“For Francis, the Christian roots of Europe are not some abstract value, which you have to defend against enemies,” said Spadaro. “These actions are rooted in what Jesus did; he served and washed his feet. These are the real roots of Europe.”

Role during Synod on the Family and afterward

As editor of La Civiltà Cattolica, Spadaro has insisted that the Synod on the Family laid the groundwork for implementing the “Kasper proposal,” which would allow divorced and remarried Catholics to receive Holy Communion.

His November 2015 article arguing just that was picked up by the German and Swiss bishops, who emphasized that Spadaro “is in close contact with Francis.”

Echoing this was de Souza, who wrote at the time that Spadaro was even more “authoritative” than the journal he edits, because he is a “confidante” to Pope Francis. “It is inconceivable that he would write something contrary to what the Holy Father desired,” added de Souza.

According to Catholic journalist Phil Lawler, Spadaro, who “worked closely with Pope Francis” at the synod, adopted “a polemical tone” during the October 2015 assembly, where on his Twitter feed, he “poured out barbs, mocking those who question the apparent direction of the Synod.”

After the April 2015 release of Amoris Laetitia, the pope’s post-synodal apostolic exhortation that still generates controversy and confusion, Spadaro continued to press the point, describing the papal document as an “evolution” in the way the Church will approach “accompaniment” of those living in situations that the Church teaches are objectively sinful.

Most recently, in a July 2016 interview with Cardinal Christoph Schönborn of Vienna on Amoris Laetitia, the two men agreed that the document is “an act of the magisterium,” with Spadaro positing that “this stage is an evolution in the understanding of the doctrine.”

To a greater degree than in the past, the objective situation of a person does not tell us everything about that person in relation to God and in relation to the church. This evolution compels us urgently to rethink what we meant when we spoke of objective situations of sin. And this implicitly entails a homogeneous evolution in the understanding and expression of the doctrine.

“Francis has taken an important step by obliging us to clarify something that had remained implicit in ‘The Family in the Modern World’ about the link between the objectivity of a situation of sin and the life of grace in relation to God and to his church, and—as a logical consequence—about the concrete imputability of sin,” Schönborn said.

“It is possible, in certain cases, that the one who is in an objective situation of sin can receive the help of the sacraments,” he added. This can be discerned through an “internal forum” that takes place between the individual and his or her confessor.

Spadaro alluded to this when he told Aleteia’s Sawicki that “the pope is more interested in driving people to the relationship [with Christ] than on what answer to provide for each question. Besides, he knows very well that the answer that seems appropriate for one does not always fit all.”

To consider this as “relativism” would be a “mistake,” Spadaro added, noting that the pope has said that “there is such a thing as a good relativism, in this sense: that God enters into a personal relationship with each person and each relationship is bound to be different…”

And while the Gospel, “which is unchangeable, is the answer,” he said, “there may be different answers to particular problems.”