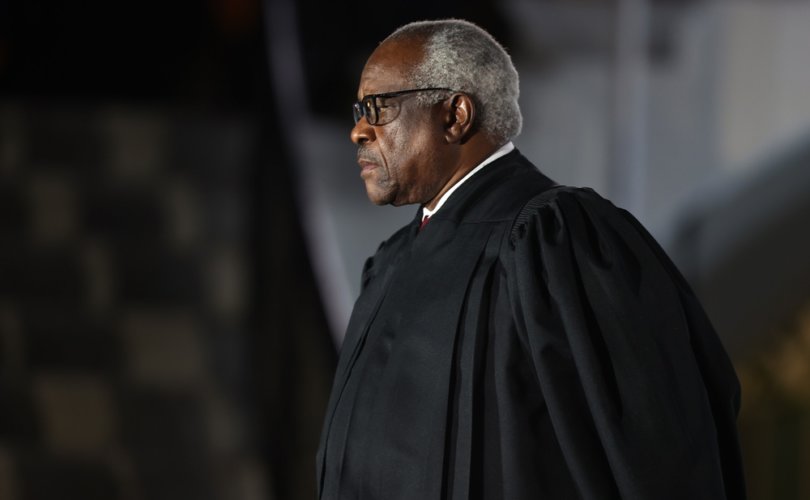 WASHINGTON, D.C. (LifeSiteNews) – Several mainstream media outlets have seized on a line in conservative Supreme Court Justice Clarence Thomas’s recent dissenting opinion in a COVID-19 vaccine mandate case to falsely insinuate he spread so-called misinformation about the use of aborted fetal cells in the shots’ development.

On Thursday, the U.S. Supreme Court declined to hear a religious liberty challenge to New York’s vaccine mandate for health care workers. Two of former President Donald Trump’s appointees to the Supreme Court appear to have agreed with the liberal justices to reject the case, allowing the mandate to stand; only Thomas and fellow conservative Justices Samuel Alito and Neil Gorsuch are listed as dissenting from the decision.

In his dissent, Thomas summarized the dispute as the petitioners “object[ing] on religious grounds to all available COVID–19 vaccines because they were developed using cell lines derived from aborted children.”

That line became a focal point for mockery by several media outlets. Some, such as Politico, Business Insider, and NBC News, suggested that Thomas was promoting misinformation or “misleading” claims (NBC says Thomas “expressed support Thursday for a debunked claim that all Covid vaccines are made with cells from ‘aborted children’”); others, such as Axios highlighted the line as if it was controversial without expressly stating why it was objectionable.

Cells obtained from elective abortions decades ago were used in testing during the Covid vaccine development process.

The practice is common in vaccine testing — including for the rubella and chickenpox vaccinations. https://t.co/13YartfO5Z

In fact, Thomas was summarizing the petitioners’ position, a standard element of judicial opinion writing, and furthermore, that position was factually correct. The statement does not claim the COVID shots contain aborted fetal cells, but that aborted fetal cells were used in their development, which is true.

The Washington Examiner’s Timothy Carney notes that the American Association for the Advancement of Science’s journal Science admits as much. In a rare instance of objectivity, even the left-wing fact-checking outlet Snopes acknowledges that “Thomas did not claim that COVID-19 vaccines contain aborted fetal cells” and “his claim that such cell lines were used in the development of COVID-19 vaccines is accurate” (at the same time, Snopes does claim the term “aborted children” in Thomas’s opinion is “highly politicized”).

The Supreme Court’s rejection of the New York challenge is an exception to the justices’ recent string of monumental conservative decisions regarding abortion, gun rights, environmental regulation, and school prayer, and continues the current majority’s record of passivity on state-level vaccine mandates, among other issues of concern to conservatives.