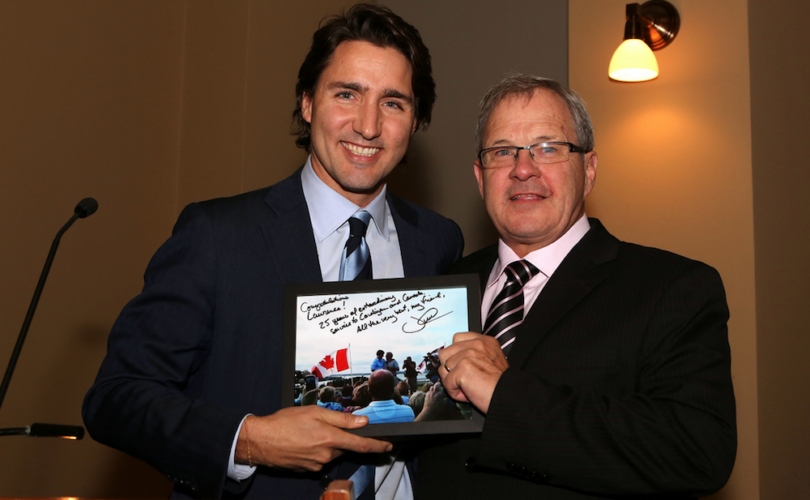 PEI Liberal MP Lawrence MacAulay says that while he is "personally pro-life," he will "vote the party position should this issue ever come up in the House of Commons."Flickr

OTTAWA — A Prince Edward Island Liberal MP with a pro-life voting record has said he will vote “pro-choice” after Liberal leader Justin Trudeau emphasized Wednesday that “every single Liberal MP” must toe the party line in voting on the issue.

On Wednesday morning, The Guardian posted a news article in which Cardigan Liberal MP Lawrence MacAulay said that Mr. Trudeau’s “grandfathering in” exception for sitting MPs permitted him to vote according to his conscience on anything abortion-related in the House of Commons.

“Despite my personal beliefs, I understand that I will have to vote the party position should this issue ever come up in the House of Commons.”

“He’s indicated that I can vote whatever way I choose. I’m, I guess, what you call grandfathered,” he said. “I have voted pro-life all the way through.”

But Mr. Trudeau immediately clarified that same day — when asked about the Liberal Party’s abortion stance in relation to Mr. MacAulay’s statement — that existing Liberal MPs have no choice but to vote “pro-choice.”

“The policy going forward is that every single Liberal MP will be expected to stand up for women's rights to choose,” Trudeau told reporters after a Liberal caucus meeting in which Mr. MacAulay was present.

Mr. MacAulay sent out a statement on Twitter after the Wednesday morning meeting. “I am personally pro-life, and have long held these beliefs,” he said. “However I accept and understand the party position regarding a woman’s right to choose. Despite my personal beliefs, I understand that I will have to vote the party position should this issue ever come up in the House of Commons.

Life and family leaders were disappointed with Mr. MacAulay’s decision.

“Here’s a guy who gives up his principles in favor of his party,” Jim Hughes, national president of Campaign Life Coalition, told LifeSiteNews. “It’s pretty sickening to see someone like Lawrence MacAulay caving into the pressure of this tyrant who is running his party.”

“In other words, he’s traded his honor, his integrity, and his conscience to continue on his political career,” she told LifeSiteNews.

Last month, Trudeau ignited a national debate on abortion and freedom of conscience when he publicly stated in a scrum that pro-lifers would not be permitted to run as candidates in the Liberal Party’s “open” nominations. He said at the time that “existing MPs who have been grandfathered in, to a certain extent, will be respected, to a certain extent, in their choices.”

But Mr. Trudeau explained to reporters Wednesday that by “grandfathering in” he was referring to something else. “The grandfathering in was around the nomination process. We brought in a new, more robust nomination process for the, you know, over 300 ridings in which we have no Liberal incumbents. The existing incumbent MPs were green-lit originally through a different process that we respect,” he said.

Prime Minister Stephen Harper said Wednesday, when questioned by reporters about Mr. MacAulay being forced to vote in favor of abortion, that while he does not want to open the abortion issue, he would not force Conservative MPs to violate their consciences.

“This is my view, this is the view of my party: We don’t want to reopen that particular issue [of abortion]. But the reality is in public life there are issues that engage people’s moral views, engage their feelings and their faith, engage their most deeply held beliefs. And it’s our party’s view that on those issues, you cannot impose views on people. You have to let people be able to express and represent their own views. And our party does do that, and we have people with a range of views on that particular question,” he said.

Landolt said MPs are not elected to be a “rubber stamp” for what the party leader decides is the policy. “The question is, do we want MPs like that who won’t stand up for their beliefs and who do as they’re told in order to pursue their career?”

Landolt criticized Mr. MacAulay for turning his back on his own beliefs, his constituents, and the unborn.

“He has ignored the unborn children and their plight, that they are totally vulnerable without protection. And he doesn’t care because his political career has usurped any other concerns.”

Hughes said that Mr. MacAulay will now be rated on Campaign Life Coalition’s website as a “pro-abortion” politician.