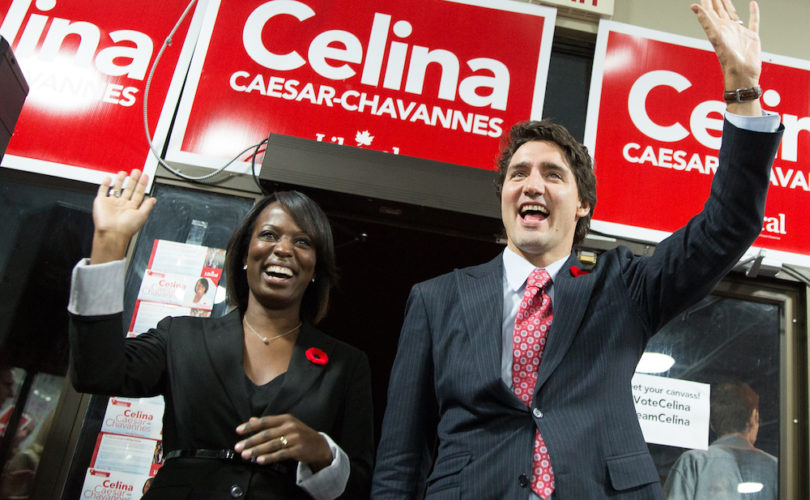 WHITBY, Ontario, August 19, 2016 (LifeSiteNews) — Whitby’s Liberal MP Celina Caesar-Chavannes is sponsoring an e-petition asking the Canadian government to censor and control what images pro-life advocates can use in public.

STT participants stand by busy roadsides holding 3 x 4 foot images, generally organized so that the first seen depict children in utero at different stages of growth, followed by a warning sign, followed by images of tiny bodies that have been dismembered by abortion.

Exposing the public to photos of abortion victims is also central to the pro-life mission of Canadian Centre for Bioethical Reform (CCBR), which includes among its multifaceted outreach the campus-focused Choice Chains. Campaign Life Coalition has also used images depicting the brutal reality of abortion, most notably in its No2Trudeau campaign, which it ran with CCBR.

The Liberal-sponsored e-petition would put a stop to all that.

“Groups have been gathering in peaceful protest against abortion showing graphic imagery,” it states, and this “imagery is being exposed to non consenting individuals and children.”

Such images “may be triggering for persons who have suffered trauma and loss involving pregnancy, infancy, childbirth.”

So it requests that the government “please intervene and create law setting out the limitations as to what imagery and content can be used in a protest or similar demonstration that is subject to public viewing.”

Sponsor Caesar-Cavannes, 42, was elected Whitby’s MP in the Liberal landslide of October 2015, and is parliamentary secretary to Prime Minister Justin Trudeau.

In a prepared statement issued by her office, Caesar-Cavannes noted her “priority is ensuring that the voices of my constituents are heard in Ottawa and I am pleased to present petitions to Parliament on their behalf.”

“As a strong and proud supporter of women’s reproductive freedoms and a parent of young children, I am disappointed to see local groups engaging in these tactics,” added the first-time MP.

“While respecting their right to protest, I would encourage them to consider the effects on their neighbours as they move forward with this campaign.”

According to Show The Truth Canada’s website, Canada’s courts have ruled the images STT uses are not illegal, the conclusion of a case launched after founder Rosemary Connell and three others were arrested in St. Thomas in 1997.

Moreover, “MP Caesar-Cavannes is either unaware of, or does not support, basic democratic principles nor the rights and freedoms embraced in our Constitution when she proposes that the state should prohibit some messages while allowing others,” noted Carol Crosson, legal counsel for CCBR.

“The knife slices both ways,” Crosson told LifeSiteNews in an email. “Tolerance and protection for free speech means allowing others to share their message, even if you disagree with it.”

A constitutional, free speech lawyer, Crosson asserted that the e-petition “is not a threat unless this government dispenses with adherence to the Charter of Rights and Freedoms, which guarantees the right to freedom of expression, especially in regard to controversial messages.”

The Supreme Court ruled in Zundel that “freedom of expression serves to protect minority beliefs which the majority regard as wrong or false,” she added. “The view of the majority has no need of constitutional protection, it is tolerated in any event.”

John Carpay of the Justice Centre for Constitutional Freedoms (JCCR), likewise decried the Liberal-sponsored petition, contending that “completely negates freedom of expression by limiting freedom to what might be ‘triggering’ in listeners, and by requiring listeners’ ‘consent’ to what is being expressed.”

Warned Carpay: “If Parliament limits speech by saying ‘you can say whatever you want, provided it does not trigger painful emotions in one or more people that hear your message,’ then very little freedom of expression is left.”

And once “freedom of expression is severely restricted in this fashion, the new law can criminalize all sorts of speech, not just graphic abortion images,” he told LifeSiteNews in an email.

“The same holds true for requiring the consent of listeners in order to express an unpopular opinion,” noted Carpay.

Had such a law been in force at the time, it have effectively “squelched” efforts of slavery abolitionist William Wilberforce, not to mention proponents of the vote for women, campaigns which were both “highly unpopular and offensive” when they began.

When people see the truth, some choose life

“Graphic imagery has always been used as a strategy to raise awareness and to educate the public on social issues,” pointed out Jeff Gunnarson, vice president of CLC.

“The government already supports the use of graphic images to discourage people from smoking, drinking and driving, etc. Either you support freedom of speech or you don’t. You can’t be selective,” he told LifeSiteNews in an email.

“What is more repugnant, the pictures of dead babies or the act of killing them?” Gunnarson added.

“Ultimately, the arguments against free expression are always based on an alleged ‘right’ not to feel hurt and offended by another’s speech, and removing from listeners their freedom to decide for themselves whether the expression they hear is true or false,” noted JCCF’s Carpay.

In this crucial aspect, pro-life advocates have heeded MP Caesar-Cavannes’s urging “to consider the effects on their neighbours as they move forward with this campaign.”

Indeed, stories abound of people who, after seeing the searing images, changed their minds on abortion — including a woman in southern Ontario who was on her way to an abortion facility when she saw STT images, and decided to keep her baby.

And in the Durham region another stifling hot July ten years ago a similar conversion took place, relates a 2005 STT newsletter.

A couple had reluctantly decided to abort their baby at the urging of their doctor, who told them prenatal tests showed the child was likely disabled. But after they saw the pictures of abortion victims, the mother told her grandfather, who had been praying for just such an intervention, she couldn’t do “that” to her baby.

Their daughter, born prematurely and perfectly healthy, is now in her teens, her baby picture now part of the Show The Truth display. Her name is Abigail Faith.

1
WATCH LIVE: LifeSite’s 25th Anniversary Gala – streaming now
2
Dr. Robert Malone: Endless mRNA jabs are in the works as the CDC and FDA play ‘hide the data’
3
Open letter to Elizabeth Warren: Why do you campaign so strongly for the murder of the unborn?
4
World Economic Forum adviser claims the planet no longer needs the ‘vast majority’ of the population
5
Prestigious Tennessee girls school now accepts any student who ‘identifies’ as female
Subscribe to Daily Headlines »