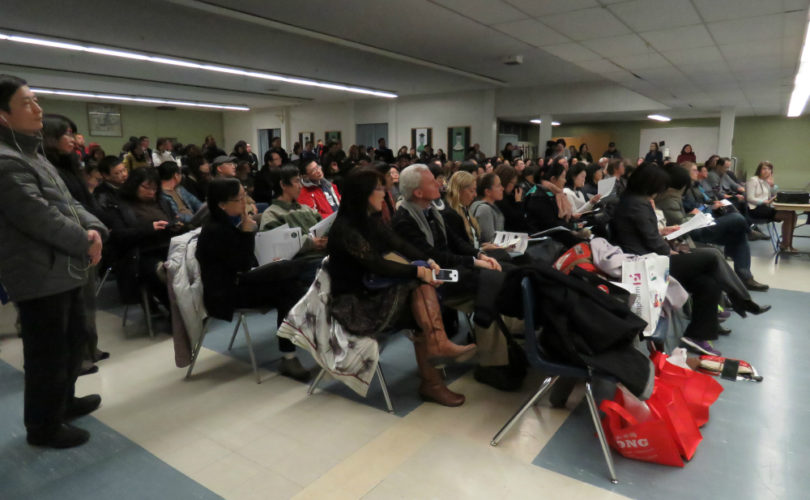 TORONTO, March 13, 2015 (LifeSiteNews.com) — Angry parents were shut down an hour into an information session on the Wynne government’s sex-ed curriculum March 12 at Scarborough’s Agincourt Collegiate, while 100 protestors outside the school chanted what has become a common answer to a sex-ed curriculum that introduces sexual consent to underage children: “We say No! We say No!”

Inside, boos and eruptions of “We say No! We say No!” persisted despite attempts by a couple of people to calm the mood, until Liberal MPP Bas Balkissoon ended the meeting with a curt statement that at his meeting people would follow his rules, which elicited a final thunderous boo from the crowd of about 200.

Police officers watched impassively as the meeting broke up and dozens of upset attendees surged to the front, surrounding and voicing objections to Toronto public school trustee Manna Wong and Liberal MPP Soo Wong, while Balkissoon, who claimed people with an “agenda” had “hijacked the meeting,” vainly tried to clear the room.

“He shut it down,” said an angry Jewell McGregor, adding that parents were “provoked by the way it was handled.” They had to sign in and sit through preliminary discussions about mundane items, she told LifeSiteNews. “We didn’t come here to talk about allergies,” she said. “They knew that.”

“It was a snow job,” said a digusted Konstatine Kolovis, father of two children aged 7 and 9, who left with Nick Christogiannis, a father of two daughters aged 10 and 11, after a heated discussion with trustee Manna Wong. Kolovis said only 200 people were permitted in the auditorium, and participants had to put their questions in a ballot box. But there was no real security, he said: “They didn’t scan anybody.”

But the Liberals seem “hell bent on introducing” the sex-ed curriculum, she said bitterly.  “It’s looking more like a dictatorship.”

That was echoed by Mel Woo, a founding member of Parents Alliance of Ontario, organizers of the protest of about 100 people along Midland Avenue which included parents and children from Mississauga to Markham. Woo came to Canada from communist China, only to find “this is a dictating country” and “adults aren’t getting information” about what’s taught to their children, she told LifeSiteNews.

The mother of an 11-year-old daughter, Woo said her group has gained nearly 1,000 members since the February 23 release of the sex-ed curriculum, which she finds astonishing, particularly because Chinese-Canadians truly are “the silent majority,” and seldom get politically involved. In fact, Woo admitted ruefully, many of them don’t vote.

The media portray the vocal parents as “frantic, extremist” and “homophobic,” she said, “lots of labels,” but they are legitimately upset they weren’t consulted and that the Wynne government tried to “sneak all this in.” And the shut down by Balkissoon was more of the same: “That’s the attitude, ‘I dictate to you.’”

Woo said that her community is galvanized and while she is not sure what they will do next, they are promoting an April 14 Queen’s Park rally, and will not give up. “I hate politics,” and she works 11-hour-days, Woo said, but “I feel really angry about this.”

Parental uproar against sex-ed explodes as call for a referendum emerges: Liberal MPP flees from program