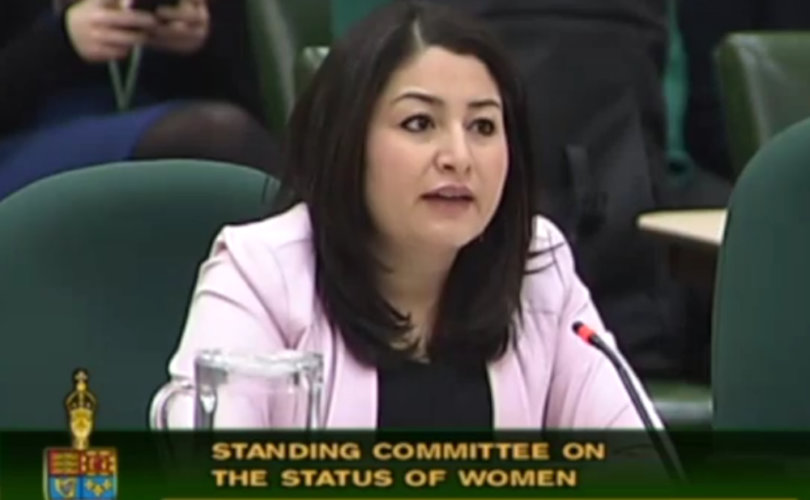 OTTAWA, Ontario, April 7, 2017 (LifeSiteNews) – An Alberta Tory MP had Canada’s Status of Women’s minister on the ropes recently over the Trudeau government’s silence on sex-selective abortion.

The exchange took place two weeks ago when Women’s Minister Maryam Monsef appeared before the Status of Women Committee to brag about the government’s campaign against “gender-based violence.” Lethbridge MP Rachael Harder wanted her to answer “a simple question, yes or no.” Do sex-selective abortions, which overwhelmingly target unborn females, qualify as “gender-based violence?”

Monsef at first played dumb, then avoided the question. The exchange, commented Jeff Gunnarson of Campaign Life Coalition, exposed the Liberals’ “entrenched thinking” that requires support for abortion of any kind, any time.

“Harder did a good job of holding the Liberals’ feet to the fire,” Gunnarson told LifeSiteNews. “They are so totally unrepresentative on this. Ninety-one percent of Canadians don’t believe in sex-selective abortion.”

Harder began by citing “a report that came out in 2012 from the Canadian Medical Association. The report said “that here in Canada there are upwards of 2,000 abortions committed every year in order to essentially get rid of girls. Now, I would say that this is actually gender-based violence targeted at little girls, pre-born girls. I'm wondering if you agree with this statement.”

Monsef replied: “Your statement being what?”

Harder said, “Is this violence and does it fit within your mandate?”

Monsef replied: “I believe that violence comes in a spectrum.”

Harder tried again: “In this case, do you believe that this is discriminating against girls?”

Monsef replied with a boilerplate statement that women “have a fundamental right to be able to control their reproductive health,” which Harder interrupted to insist she stick to the topic: sex-selective abortion.

After some more sniping, Harder asked the question again: “Do you believe that sex-selective abortions, as identified by the Canadian Medical Association in 2012, are gender-based violence, yes or no?”

But when it became clear that Monsef would respond only in more platitudes, Harder curtly cut her off with several “thank yous” until the minister stopped talking.

“She did a fabulous job,” Gunnarson said. “We applaud it.”

He expressed hope that Harder and other pro-life MPs “keep it up.” He explained that the Liberal position was “No violence is being done because the unborn girls are not persons but merely lumps of tissue.” He added, “They are like the Flat Earth Society. They won’t admit the science” showing that each fetus has its own DNA and its own organs functioning independently of the mother.

“It makes you sick that this is happening in Canada,” Gunnarson said.

In 2012, British Columbia Tory MP Mark Warawa introduced Motion 408 in the House of Commons that condemned sex-selective abortion, but a rules subcommittee dominated by opponents deemed it out of order.

That same year the Canadian Medical Association Journal reported that Canada had become “a haven for parents who would terminate female fetuses in favor of having sons.”

An editorial in the same issue called for testing facilities to withhold the gender of unborn children and said sex-selective abortion was most common among immigrants from India and Southeast Asia. However, the BC College of Physicians and Surgeons rejected the idea.

The Abortion Rights Coalition of Canada accused Warawa, but not the CMAJ, of “covert racism” and questioned any research suggesting sex-selection abortions were more prevalent in Canada than anywhere else.

More recently, the leader of ARCC, Joyce Arthur, told LifeSiteNews that her group is opposed to the social or cultural beliefs behind gender-based abortion. However, education, not criminalization, is the solution.

“Being pro-choice means the woman gets to decide for her own reasons and we don’t have to agree with them to support her right to abortion,” Arthur said. “Women do not have to state a reason for abortion in Canada.”

In fact, ARCC maintains that efforts to stop sex-selection abortions are just the first step to bans on all abortions.

“They believe completely in the slippery slope,” Gunnarson said. “If they concede there is even a hair, even a degree of truth to concerns about sex-selection abortion, they believe eventually all abortion will be banned.”

But this exposes the problem that radical feminism’s “love affair with abortion” poses for the Liberal government, said Gunnarson. It commits them to unpopular and clearly anti-females activities such as gender-selection abortion. When Harder challenged Monsef, she could only avoid answering.

In 2015, a left-liberal website called Press Progress listed Harder among 86 Conservative candidates in Canada who “will vote against women’s reproductive rights.” However, Campaign Life Coalition has not given her its unqualified approval because of a report that she expressed support for so-called reproductive rights at an all-candidates meeting during the last election campaign. Harder’s campaign manager claimed she was misquoted. Harder has declined to be interviewed about the incident in the past and did so again this week.