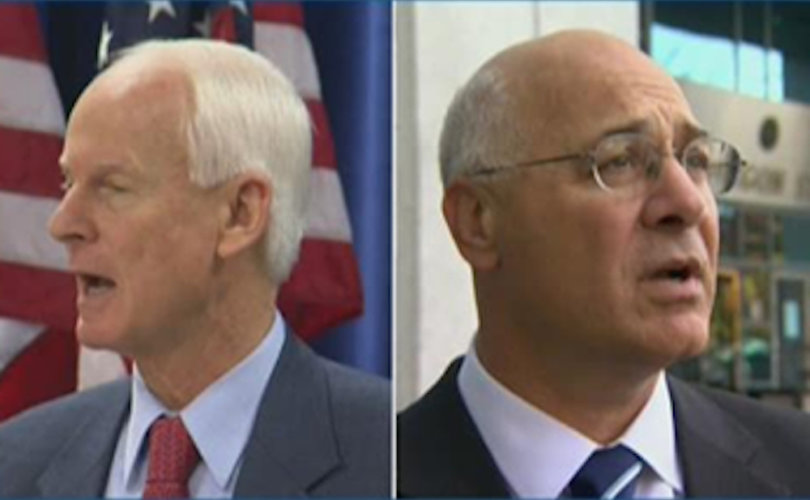 November 16, 2016 (LifeSiteNews) — Brad Avakian, the Oregon labor commissioner who investigated and then fined Christian bakers Aaron and Melissa Klein for refusing to bake a “gay wedding” cake for two lesbians, lost his race for Secretary of State last week in a historic election that broke the Democrats’ 14-year hold on statewide offices.

Oregon Republican Dennis Richardson defeated Avakian for Secretary of State — the first GOP victory in a statewide race since 2002. Richardson is a social conservative opposed to homosexual activism, The Oregonian reported. On his campaign website, Richardson promised to ”restore Accountability, Transparency, and Integrity to state government.” He was endorsed by many newspapers, including the liberal Oregonian, despite his socially conservative views.

The Kleins and their Gresham, Oregon, bakery were fined $135,000 by the State of Oregon for an alleged “civil rights” violation in 2013 for declining to make a homosexual-union celebration cake for two lesbians they had served many times before. The state’s punishment of the Kleins and their Sweet Cakes by Melissa bakery, which first closed its physical location and then shut down entirely because of their “discrimination” ordeal, is the most visible case in recent years among dozens of cases nationwide pitting religious freedom against LGBT “rights.”

As LifeSiteNews reported, Avakian fined the Kleins $135,000 and “ordered the couple ‘to cease and desist from publishing, circulating, issuing or displaying, or causing to be published … any communication to the effect that any of the accommodations … will be refused, withheld from or denied to, or that any discrimination be made against, any person on account of their sexual orientation.’ In other words, if the Kleins promised to fight the ruling, they could be fined again.”

The Christian couple has faced repeated trials in their battle to uphold their freedom to live by their own conscience. After being fined, they raised $110,000 online only to have their “GoFundMe” fundraising site suddenly shut down because it violated the “terms and conditions” of the site. Later, it was revealed that GoFundMe would ban “discriminatory” campaigns like the Kleins’. Ultimately, the Kleins raised $355,000 through another, more tolerant online fundraising site, Continue to Give.

It wasn’t just for religious reasons that Oregonians have faced large fines and state punishment for LGBT “civil rights” violations. In 2013, the state fined Portland bar owner Chris Penner $400,000 for violating the state’s “Equality Act” for allegedly discriminating against cross-dressing men at his establishment. Penner had left a voicemail message with one such gender-confused man asking him and other members of a “transgender women’s group” not to return to the bar because he feared it was becoming known as a “tranny bar,” thus driving away other customers.