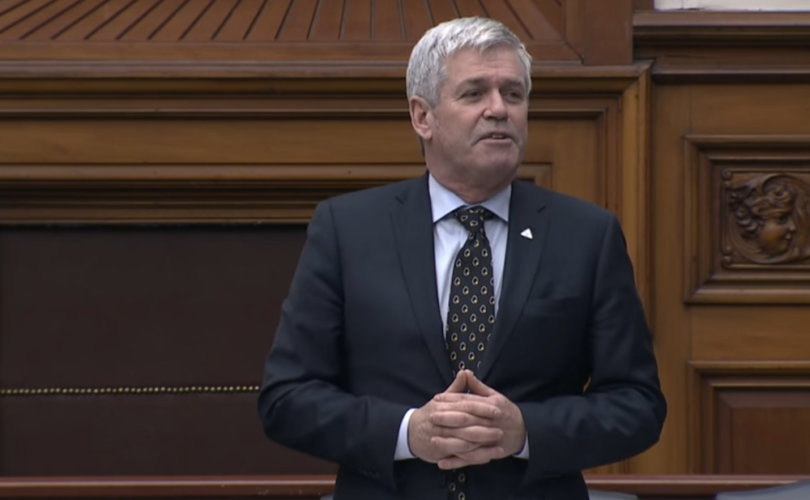 TORONTO, April 26, 2017 (LifeSiteNews) — Tony Chow is a technical systems analyst, a Christian, a father, and an opponent of gender ideology.

He’a also among the many Ontarians warning that Liberal Bill 89 gives the state power to seize children on the grounds that opposing gender identity is a form of child abuse.

Critics warn the bill, currently before the justice committee, also allows the state to ban couples opposed to gender ideology as foster or adoptive parents.

Bill 89, which replaces the existing Child and Family Services Act, adds “gender identity” and “gender expression” as factors to be considered in determining what’s “in the best interests of the child.”

That is evident, but such is the state of politics that when Chow criticized Bill 89 before the justice committee, things got personal.

“What gender do you identify as?” asked committee member Liberal MPP Arthur Potts.

“Do I identify myself?” replied Chow, evidently taken aback.

“What gender do you identify as?” asked Potts again.

“What gender myself?” asked Chow.

“And I identify ‘male’ as well,” said Potts.

“So when I see gender identity in this bill, I think it covers all Ontarians, and not just 99 percent who maybe have confusion about what their identity is.”

Contrary to what Potts averred, 99 percent of the population are not confused about their gender identity.

Rather, the transgender population in Canada is “between .25 percent and .1 percent, and that, I think, is inflated,” Chow pointed out in his five minutes in front of the justice committee.

He also asserted that Premier Kathleen Wynne’s Liberal government, in its “infinitely expensive creativity, draws up a 282-page document to include juvenile gender identity that is an absolute exception.”

Exceptions should be handled for what they are, said Chow, as exceptions.

Moreover, he questioned why children would be confused about their gender identity.

“As a jogger in the open, I watch ducks, geese and their offspring a lot,” he said. “I never saw a boy duck try to be a girl duck, or vice versa.”

“Why? Probably because they didn’t have to go through the Ontario sex education curriculum.”

Chow also blasted Bill 89 for removing “the religious faith, if any, in which the child is being raised” as a factor to be considered when deciding what’s in the best interests of the child, and replaces it with the child’s own “creed.”

The Liberals have agreed to amend “creed” to include “religion.”

But the essential flaw is not the definition of “creed,” Chow told the committee, but “the shift of focus from the parents’ faith to the child’s faith.”

A child’s faith “could be a flying spaghetti monster one day and reptilian alien gods the next,” he said.

Coteau told QP Briefing: “I would consider that a form of abuse, when a child identifies one way and a caregiver is saying, no, you need to do this differently.”

Coteau added: “If it’s abuse and it’s within the definition, the child can be removed from that environment and placed into protection where the abuse stops.”

When an “honourable minister of Ontario considers that a form of abuse,” Chow said, “this has now crossed from a parental authority issue into a thought police issue.”

He believes “the reason why the Ontario government is introducing this bill, and all the language that they use, is an excuse to advance their own agenda,” Chow told the committee.

“Yes, we need to take care of the young people and children, but I personally believe that there is another agenda going on here.”

Chow is far from alone in raising these concerns.

The Association for Reformed Political Action (ARPA), Parent As First Educators (PAFE), and Queenie Yu were among pro-family groups and individuals who criticized the bill at committee.

“I disagree with the Minister. As do the thousands of parents with whom I’ve dealt with in preparing for this Committee meeting,” she said.

“Many children and teens have thoughts about their own gender or another at some point in their life because of a jealous sibling, a desire to buck social trends, a close friendship, for attention, for low self-esteem, for affirmation,” noted Granic Allen, a mother of four.

“But that does not mean parents ought to hyper-accentuate these instances.”

She told the committee that “gender dysphoria should not be treated lightly, as I would argue Bill 89 does.”

“These conversations with a gender-questioning child are best had within the family home, with parents who know their child best,” said Granic Allen.

“Let parents parent. The government should support parents, and not insert itself into the family.”

Yu and Granic Allen, who have been lobbying hard against Bill 89, as well as federal Bill C-16, since January, have produced a compelling video. In it, free speech advocate Dr. Jordan Peterson, a clinical psychologist and University of Toronto psychology professor, outlines the dangers of the legislation. It can be viewed here.

And ARPA’s three-minute video on Bill 89 can be viewed here.

The justice committee continues its clause-by-clause consideration of Bill 89 on Thursday.

PAFE’s Granic Allen says it’s not too late to lobby against the Liberal law, which passed unanimously at second reading.

“There is still one more vote on Bill 89, so people need to contact their MPP and tell them to stop it,” she told LifeSiteNews.

Granic Allen also urged people to sign the PAFE petition, which has 5,234 signatures to date.