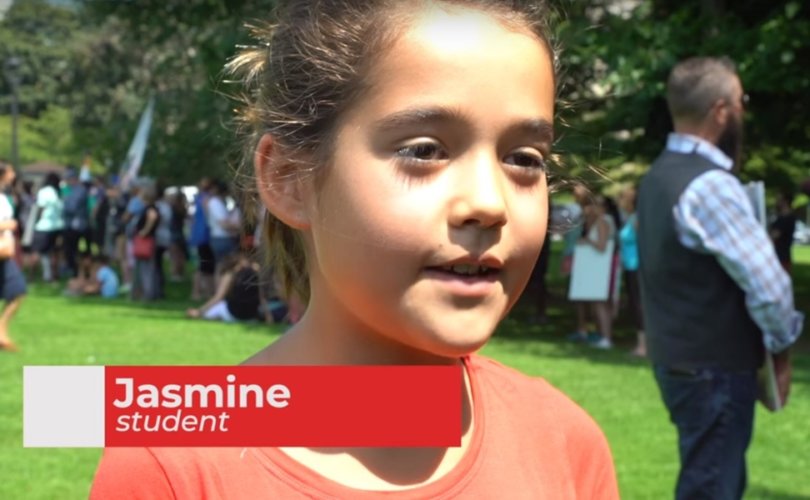 TORONTO, Ontario, September 27, 2018 (LifeSiteNews) – Kids as young as 10 years old are the stars of what is being billed as a news show covering Ontario's sex-ed curriculum, transgenderism, and recreational marijuana on Canada's taxpayer-funded public broadcaster.

Ezra Levant, co-founder and host of the conservative news outlet The Rebel Media, has looked over many of the young hosts' reports and accuses CBC Kids News of using children to indoctrinate Canadian kids in liberal ideology.

In a report for The Rebel, he pulls no punches in attacking the show, calling it little more than very thinly disguised propaganda for Liberal Prime Minister Justin Trudeau.

Levant goes so far as to describe these CBC Kids News hosts as little more than puppets for the adult journalists and producers he maintains feed them their lines.

In a story on CBC Kids News, a little girl identified only as “Jasmine” was interviewed in August this year at a protest over Premier Doug Ford's repeal of Ontario's explicit sex-ed cirriculum. Brought into schools under the previous provincial government, it taught elementary school-aged children about transgenderism, homosexuality, and same-sex “marriage.”

Here's what 11-year-old “Jasmine” had to say about transgenderism: “There's not only just two genders. There are people that, like, they don't feel like who they really are and they just wanna be somebody else and you have to respect that.”

According to Levant, children that young simply do not talk like that – unless they are being scripted. He strongly suggests on his show that liberal producers, parents, and CBC journalists are using these children as pawns to push a liberal ideology onto other Canadian kids.

“I watched the whole video — no, they did not have any children giving the other point of view, that maybe an 11-year-old is too young to talk about transgenderism, and transsexualism and other extreme sex ed,” Levant wrote.

CBC spokesman Chuck Thompson denied in an interview with LifeSiteNews any allegation that the CBC Kids News hosts or the children they interview are actors. However, the CBC Kids News’ own website describes the hosts as having done some acting prior to joining the show.

The CBC spokesman also defended the age-appropriateness of the topics covered by these CBC Kids News hosts.

“Anything we put on the service, we deem to be age appropriate because it is being discussed in the home, on the playground or in the classroom,” said Thompson.

Cedar Grove Baptist Church pastor Kevin Cavanaugh, though, says the only reason children are discussing these subjects is because public schools are forcing them to do so through explicit sex-ed curriculums.

On Wednesday, Cavanaugh was among the roughly 200 pastors and 1,000 church leaders who joined together to announce their West Coast Christian Accord's 14-point agreement. The fledgling group is committed to putting an end to British Columbia's sexual orientations and gender identities program, commonly called SOGI 123.

“We believe it's child abuse,” Cavanaugh said in an interview Thursday.

In a news report for The Rebel, David Menzies shows just how little students that age actually know about their sex-ed programs. In an interview with elementary school students protesting the repeal of Ontario's sex-ed program, not one of the children interviewed by Menzies could cite a single reason why the program to replace it is deficient in any way.

Yet, in one CBC Kids News report after another, these child hosts expound on topics in decidedly adult language, including Baron's observations that the legalization of recreational marijuana will be “good for economic development.”

According to the CBC's spokesman, the four child hosts for CBC Kids News, whom the broadcaster calls contributors, “work closely with our team of seasoned producers and journalists to help produce the stories they are assigned.”

The broadcaster is planning to expand its roster of young hosts for CBC Kids News next year.