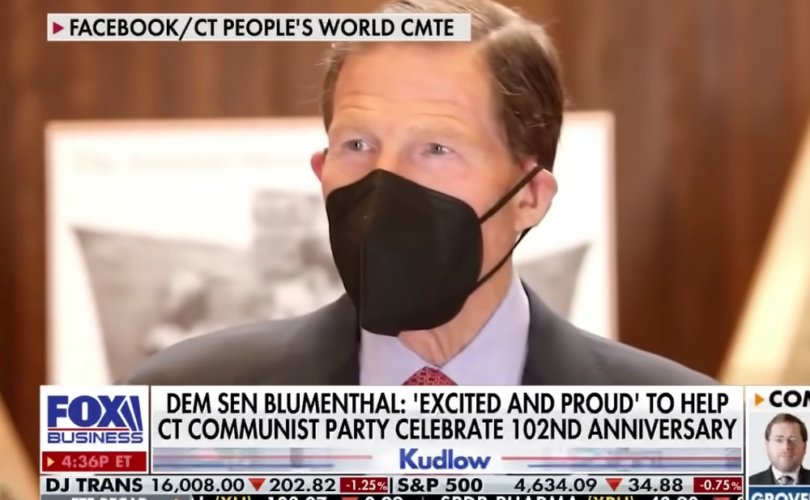 CONNECTICUT (LifeSiteNews) – Democratic U.S. Senator Richard Blumenthal apologized for attending a Communist Party recruitment event on December 11, saying if he had “known the details” he wouldn’t have gone.

The Connecticut People’s World Committee, a branch of the Communist Party USA (CPUSA) honored the liberal senator with its “Amistad Award” during its annual dinner.

“I am really excited and honored to be with you today and share in this remarkable occasion,” Blumenthal said, according to the conservative Yankee Institute. Despite later claiming he was unaware it was a Communist Party event, his reported remarks indicate he was aware of possible perception problems.

“You don’t have to agree with anyone or everyone, with any party or any particular union or organization,” Blumenthal told the crowd, according to the Hartford Courant. “I’m here to honor the great tradition of activism and standing up for individual workers that is represented by the three honorees here…I’ve known and worked with all of them. They are extraordinary examples of courage, grace under pressure, ferocious fighting for the rights of working people, and for democracy.”

“There’s a lot to be working for in economic justice, in racial equity, in establishing a $15 minimum wage,” Blumenthal said, according to the Yankee Institute, “and holding corporations accountable for the basic treatment of the American people. We need to look at our entire tax system, beginning with Build Back Better.”

“Build Back Better” was a key legislative priority for the Biden administration. Its current form has been doomed to defeat in the U.S. Senate. “Build Back Better” is also a slogan of the Great Reset, the socialist, globalist plan of the World Economic Forum.

One of the emcees, Ben McManus echoed those themes in his pitch to attendees to become an official member of the People’s World Committee.

“We invite you to join the Communist Party in this epic time as we make good trouble to uproot systemic racism, retool the war economy, tax the rich, address climate change, secure voting rights and create a new socialist system that puts people, peace and planet before profits,” McManus said.

“People’s World is a voice for progressive change and socialism in the United States. It provides news and analysis of, by, and for the labor and democratic movements to our readers across the country and around the world,” its website explains.

“People’s World traces its lineage to the Daily Worker newspaper, founded by communists, socialists, union members, and other activists in Chicago in 1924,” its history section says.

Blumenthal backtracked from his support for the organization and dinner in an interview with the Hartford Courant.

However, his voting record is regularly rated as liberal and opposed to economic freedom. He had the eighth most liberal voting record in the U.S. Senate in 2019, according to GovTrack.

He also has a lifetime three percent rating from Heritage Action for America which scores both fiscal and social issue votes.