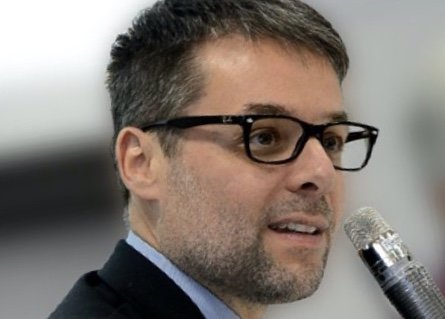 The “schismatic instincts” of Archbishops Charles Chaput of Philadelphia and Salvatore Cordileone of San Francisco along with Bishop Joseph Strickland of Tyler, Texas, “have been on display since the beginning of Francis' pontificate,” Faggioli said.

“But they were particularly visible in August 2018,” he said, when they “sided with Archbishop Carlo Maria Viganò, the former papal nuncio to Washington who called on Francis to resign.

Writing in a July 16 article for La Croix magazine, Faggioli discussed various forces that challenge Francis from a place of devotion to “conservative political-theological assumptions” over Catholicism.

He first listed Italy Interior Minister Matteo Salvini as example of a “devout schismatic.” A Catholic, Salvini is controversial with the left for his firm stance against open borders. He roiled liberal Catholics earlier this year when he held up and kissed a rosary at a political rally and commended his country, its citizens, and himself to the Immaculate Heart of Mary.

Salvini and his supporters, Faggioli said, “are in large part those who have embraced Catholicism for its political alignment in the last 20 years or so.”

“They are devout in the sense that they publicly display their preference for a traditionalist Church and its devotions, such as the rosary,” he stated. “They are schismatics because they openly promote the undermining of the bishop of Rome among the Catholic faithful.”

“The excessive obsession with only one particular aspect of the Christian faith has always been the path to heresy and schism,” Faggioli wrote.

From there, the Villanova professor went on to place Chaput, Cordileone and Strickland in the same prescribed category.

“These ‘devout schismatics’ are not only politicians,” he said. “They also include some theologians, priests, bishops and even cardinals.”

Faggioli stated, “Their schismatic instincts have been on display since the beginning of Francis' pontificate. But they were particularly visible in August 2018, when some of them – such as Archbishops Charles Chaput of Philadelphia and Salvatore Cordileone of San Francisco, as well as Bishop Joseph Strickland of Tyler (Texas) – sided with Archbishop Carlo Maria Viganò, the former papal nuncio to Washington who called on Francis to resign.”

Viganò had released his bombshell “testimony” on August 25, 2018, alleging among other things that the pope knew about former cardinal Theodore McCarrick’s sexual misconduct and predation, ignored warnings about the matter, covered for McCarrick and lifted sanctions placed upon him by his predecessor, Pope Benedict XVI.

“In this extremely dramatic moment for the universal Church, he must acknowledge his mistakes,” Archbishop Viganò wrote, “and, in keeping with the proclaimed principle of zero tolerance, Pope Francis must be the first to set a good example for cardinals and bishops who covered up McCarrick’s abuses and resign along with all of them.”

Shortly after the release of the Viganò testimony, Strickland wrote to the priests of his diocese that he found the allegations against the pope and other senior churchmen “credible” and called for a “thorough investigation,” instructing them to disseminate his statement on the former apostolic nuncio’s letter at Mass and on social media.

Cordileone issued a statement vouching for Viganò’s credibility, saying, “From information I do have about a very few of the other statements Archbishop Viganò makes, I can confirm that they are true,” and “his statements, therefore, must be taken seriously.”

Chaput did not to respond to Viganò's testimony directly, saying via a spokesperson that the allegations were “beyond his personal experience.” He did say he “enjoyed working with Archbishop Viganò during his tenure as Apostolic Nuncio,” and vouched for Viganò's character, saying he “found his service to be marked by integrity to the Church.”

In recounting a June 2013 personal interaction with Francis in his testimony, Viganò said the pope told him that “Yes, the bishops in the United States must not be ideologized, they must not be right wing like the Archbishop of Philadelphia,” an indirect reference to Chaput.

Chaput, Cordileone and Strickland are largely regarded as more orthodox among U.S. bishops.

Faggioli’s La Croix column was the subject of a Catholic News Agency (CNA) report in which CNA listed examples of Chaput’s praise for Francis in other instances, noting that Chaput had not endorsed the allegations made by Viganò.

The liberal professor at Philadelphia’s Villanova University, located in Chaput’s archdiocese, took issue with the CNA report, accusing CNA on Twitter of publishing a hit piece and claiming initially that he was not contacted for comment until after the article was published.

There was subsequent discussion on the social media platform attributing confusion on the timing of the request for comment to time zone differences and jet lag on Faggioli’s part. As of press time, debate continued on Twitter as to whether CNA had given Faggioli sufficient time to respond.

In comments added later to the article, Faggioli told CNA that he “did not state that the archbishop (Chaput) called on Francis to resign or that he created a schism, only that he vouched for Viganò’s integrity. That seems like siding with Archbishop Viganò especially in the context of his continued silence about Viganò’s request for the resignation of the pope.”

“Viganò put pressure on the pope to resign,” Faggioli added. “One would expect a bishop — and especially an archbishop metropolitan who has twice received the pallium, a sign of special unity with Christ and of communion with the successor of Peter — to defend the pope’s integrity and to say that no one has the right to ask the pope to resign.”

Faggioli later posted his comments to CNA on Twitter, stating, “Asked to comment for the piece against me published in CNA last night, they buried my comments in the middle of the article where no one can see them.”

Schism, as defined by Canon law, is “the refusal of submission to the Supreme Pontiff or of communion with the members of the Church subject to him.”

At the time Viganò’s testimony was released, Faggioli told Slate that Viganò’s statement was, in reality, driven more by a settling of “old scores” and stopping Pope Francis from “ushering in a more welcoming church for LGBT people.”

He wrote for Commonweal that the testimony was “motivated by a personal vendetta.”

Commenting on Twitter in regard to Viganò’s testimony, Faggioli also referred to the former papal nuncio to the United States as a terrorist.