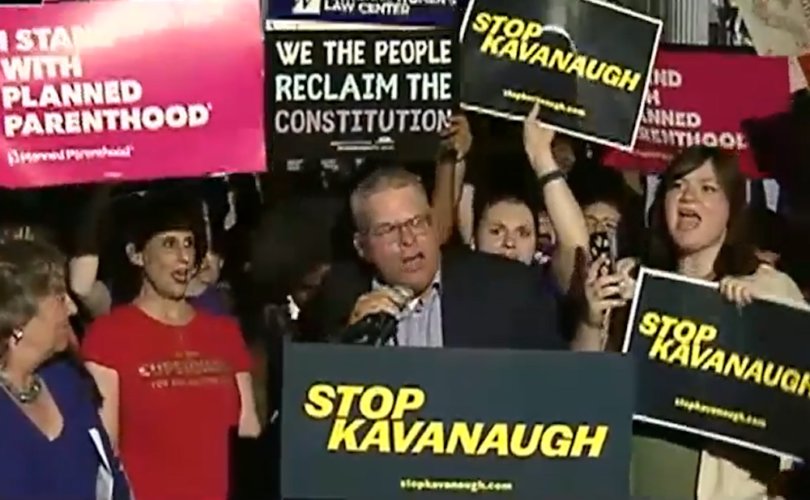 Democrats announced an all-out blitz against Kavanaugh, with Senate Minority Leader Charles Schumer, D-New York, vowing, according to the Washington Post, to fight Trump’s nomination of Kavanaugh “with everything I've got.”

Some on the left had arranged pre-planned protests no matter who Trump nominated.

ZeroHedge.com’s Tyler Durden covered some of the orchestrated liberal meltdown.

A pre-written press release from the Women’s March terming Trump’s SCOTUS pick an “extremist” was released before the nominee’s name had been added.

When you pre-write your press release slamming Trump’s SCOTUS pick but forget to add the name…. pic.twitter.com/5GiEJXMHUR

Reporting on Hollywood’s emotional outburst Monday night, Breitbart ran down some of the extreme commentary.

Even CONSIDERING this nomination will cement the first American dictatorship #KavaNO

Some of the celebrities’ dire pronouncements came before the official announcement.

OK Ladies and Gentlemen who care for and respect ladies, it is official. The move back to Medieval Values, Shariah Law even, where old, bitter men get to tell women what is best for their bodies, lives, and well being is as done a deal as this is Twitter. Unless we say NO! NO!

He is the trifecta of terrible, and he must never sit on the Supreme Court.

With Donald Trump's pick for #SCOTUS threatening to reverse #RoevWade, it's more important than ever to fight back and enshrine abortion and access to contraception. Join us and @VoteChoice for a rally to #SaveRoe in Union Square tomorrow at 4:30 PM: https://t.co/o0u4qgCgU8

Some response to the Kavanaugh nomination heralded the ongoing hostility and aggression directed at conservatives, Republicans and Trump supporters that has escalated since before Trump’s 2016 election upset of Hillary Clinton.

“Very few times I’ve felt threatened while out in the field,” Bream tweeted. “The mood here tonight is very volatile. Law enforcement appears to be closing down 1st Street in front of SCOTUS.”