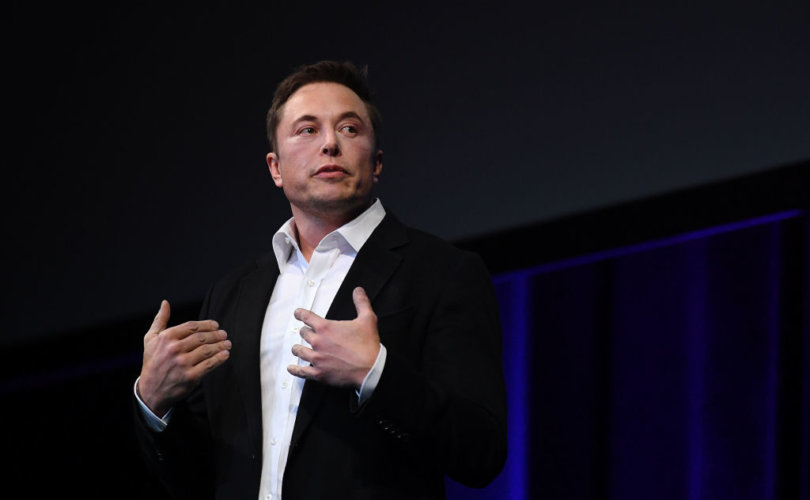 (LifeSiteNews) – Liberal commentators fear that free speech might no longer be censored – and conservative viewpoints no longer banned under the guise of “hate speech” – now that Elon Musk purchased a big stake in Twitter and joined its board of directors.

The wildly inventive entrepreneur behind Tesla and SpaceX acquired 73.5 million shares, amounting to 9.2% of Twitter stock, making the world’s richest man the company’s largest shareholder. By Monday, his investment in Twitter was worth about $3.7 billion.

“It seems that the recent turn of events put Elon Musk in a position to affect change in how free speech is defined within the Twitter platform and how much Twitter users have to say about it,” noted The Republic Brief’s Liza Carlisle. “Eyes are on Musk to see what power his new position will give him to affect change in regard to free speech.”

In late March, Musk gave a clear indication of his attitude toward social media censorship when he asked his over 80 million Twitter followers, “Free speech is essential to a functioning democracy. Do you believe Twitter rigorously adheres to this principle?”

Later that day, Musk doubled down on his condemnation of censorship in another tweet: “Given that Twitter serves as the de facto public town square, failing to adhere to free speech principles fundamentally undermines democracy.”

Conservatives hope that Musk’s stake in Twitter means not only that their voices will no longer be suppressed, but that former President Donald Trump will again be able to communicate directly with his over 88 million Twitter followers.

“Musk’s purchase reignited calls to rein in Big Tech’s influence,” wrote Aaron Kliegman at Just the News, “and conservatives pushed him to reinstate Trump’s Twitter account, which was banned in the wake of the Jan. 6 Capitol riot last year.”

Musk should use his influence at Twitter to “demand the end of political censorship, company-wide reform, and the reinstatement of President Trump,” said conservative pundit Monica Crowley, a former member of the Trump administration, in a tweet.

“The best thing he can do right now is revoke the permanent suspension on President Trump,” Basenese continued. “It would boost engagement immediately.”

But far from thinking that Musk’s potential influence at Twitter is a “net positive,” liberal pundits appear apoplectic at the prospect of freedom of speech returning to the modern-day public square.

“If Musk convinced Twitter to rethink its ban on Trump, it would throw the former president a major lifeline,” lamented CNN’s Chris Cillizza.

Kara Alaimo, the NBC story’s author, fretted that Musk had recently tweeted, “‘Free speech is essential to a functioning democracy’ and polled Twitter users about whether they ‘believe Twitter rigorously adheres to this principle.’”

So-called free speech can have deadly consequences. Law professor Danielle Keats Citron points out in her book “Hate Crimes in Cyberspace” that our government restricts speech for many reasons, including in certain cases of threats and speech that facilitates crimes. Social networks need to do the same to protect us from violence and disinformation about topics like our health and elections.”

Musk “is obsessed with his version of free speech,” according to Marina Koren, writing at The Atlantic.

“Musk’s absolutist stance on public discourse potentially stands in conflict with even the limited policing of content that social-media companies do now,” Koren worried.

Former President Donald Trump was banned from Twitter last year over his tweets about the January 6 insurrection; after Musk’s investment in the company was revealed, some far-right members of Congress called for changes to Twitter’s policies that would allow for Trump’s return.

Others have wondered whether Musk’s involvement in Twitter could lead to a loosening of rules meant to protect users from harassment and abusive behavior. It is unclear what a potentially new Twitter environment might mean for journalism, for which Musk holds an almost Trumpian contempt.

“Dems & liberal activists groups have spent years co-opting the censorship power of tech billionaires and expressing gratitude to Google and FB execs for censoring their enemies off the internet,” tweeted leading independent journalist Glenn Greenwald. “Now they’re petrified a billionaire who won’t censor for them may take over Twitter.”

“There’s no need to wonder what the U.S. liberal-left thinks about free speech. Polling data proves they don’t believe in it,” said Greenwald in another tweet. “Huge majorities want not only tech oligarchs *but also the state* to censor the internet for them.”