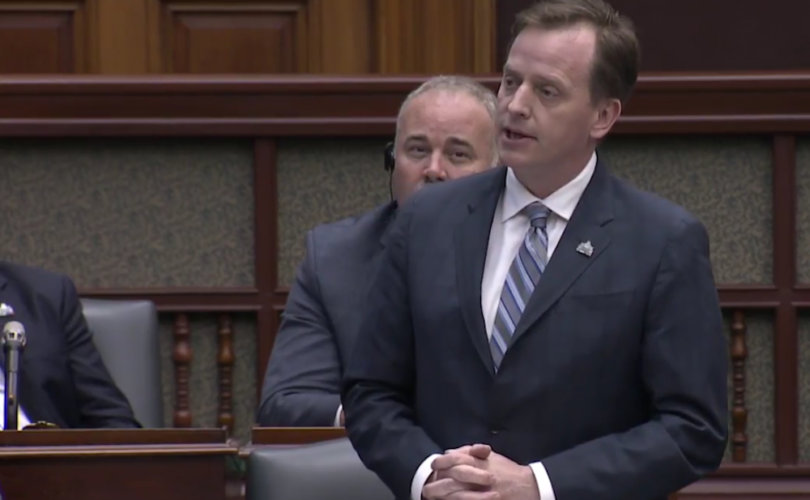 The Liberal move leaves conscientiously objecting doctors with no protection against a College of Physicians and Surgeons of Ontario’s policy forcing them to give patients requesting euthanasia an “effective referral” — that is, to a willing and accessible colleague for the purposes of accomplishing the act.

Doctors who refuse can be disciplined by CPSO and could lose their license to practise.

“We were very disappointed,” says Larry Worthen, spokesperson for the Coalition for HealthCare and Conscience.

“We met with various politicians that were involved and we described for them the ways that people could access medical assistance in dying without affecting conscience rights and yet they still voted to not include the conscience amendment,” he told LifeSiteNews.

The Coalition for Conscience had also launched a massive lobbying campaign for conscience rights in Bill 84, and 25,000 people sent letters to MPPs, Worthen said.

The Liberal refusal to protect conscience rights will cost them, says Alex Schadenberg of the Euthanasia Prevention Coalition.

“This is a crucial item,” he told LifeSiteNews.

“Liberal backbenchers are going to find it awfully hard to get elected in the next election if they don’t start supporting conscience rights and issues that matter to doctors and people in Ontario.”

Liberal intransigence on this point is a bit surprising to Monte McNaughton, the first MPP to speak up for conscience rights at Queen’s Park.

“Ontario’s still the only jurisdiction in the world that is moving forward with effective referral protocol,” the MPP for Lambton-Kent-Middlesex told LifeSiteNews.

“You would think the government would look to other jurisdictions on how they protected conscience rights.”

Moreover, conscience rights protection has widespread support, he pointed out.

“I’ve raised this a number of times in the House, introduced petitions signed by thousands of concerned people right across Ontario,” McNaughton said, adding that there are “a number of organizations and individual doctors who have been raising this for months now.”

That includes the Ontario Medical Association, which sent representatives to meet with McNaughton and other MPPs, and is “on the record wanting the government to move away from effective referral protocol and to ensure that conscience rights are protected.”

The OMA appeared before the the committee urging it adopt conscience rights protection, as did the Catholic Civil Rights League, the Assembly of Catholic Bishops of Ontario, and Cardinal Thomas Collins, who spoke on behalf of the Coalition for HealthCARE and Conscience.

But the “Wynne government is determined to move forward with this globally unprecedented effective referral protocol,” McNaughton said.

In doing so, the Liberals are “stripping a basic freedom from these doctors and health care practitioners, that is freedom of conscience.”

Worthen said the committee passed an amendment to set up a care coordination service, which is patient-accessed and connects a patient seeking euthanasia with a doctor who is willing to kill him or her.

However, “until the requirement for effective referral is struck down that doesn’t really help us in terms of protecting conscience,” he said.

The Coalition is now focused on the legal challenge to the CPSO policy that will be be heard in Ontario’s divisional court June 13 to 15 in Toronto.

Five Christian doctors and three groups are arguing that the CPSO policy violates a physician’s Charter protected rights of religion and conscience.

The doctors are co-plaintiffs with the Christian Medical and Dental Society of Canada, Canadian Physicians for Life, and the Canadian Federation of Catholic Physicians’ Societies

The Liberal government is intervening on behalf of the CPSO.

Meanwhile, MPP Yurek (Elgin-Middlesex-London) will table a private member’s bill on conscience rights on May 11.

Yurek’s amendments to Bill 84 would have protected doctors from civil liability and discipline by the CPSO.

Those amendments clarified that doctors with conscientious objections would not block patients’ access to euthanasia.

The amendments clarified that objecting doctors would provide, on request, information “about services that can provide access” to euthanasia; patient medical records, and would communicate “to the appropriate person in authority a patient’s request for a complete transfer of care so that the person in authority can facilitate the transfer.”

Worthen told the Catholic Register that the Coalition for Conscience backed Yurek’s amendments, which provided access to euthanasia “without negatively affecting conscience rights.”

“It’s important that people realize that we’re not trying to block patients from accessing this,” he told the Register. “What we’re trying to do is not be morally implicated in their decision.”