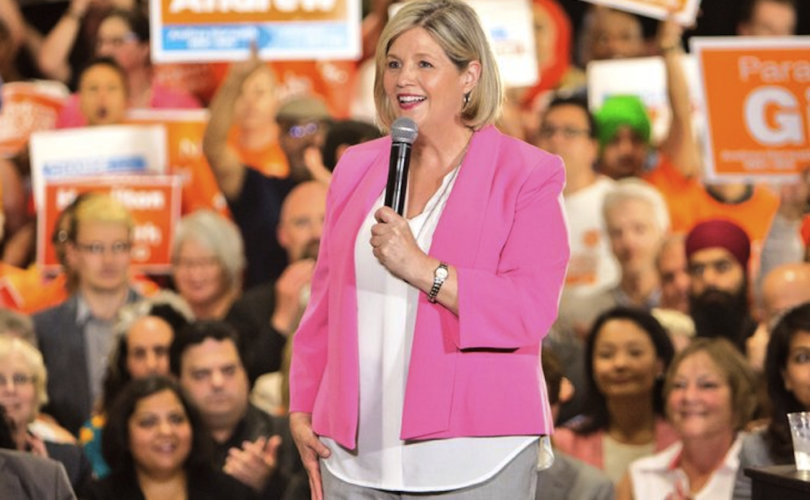 TORONTO, May 25, 2018 (LifeSiteNews) — A win by the NDP would be a disaster for Ontario, pro-life advocates warn in the wake of a new poll showing the left-of-centre party pulling into the lead less than two weeks before the province’s June 7 election.

“If the election were held today, we project these results would see an NDP majority government with 79 seats,” Forum said in a press release.

It also projected the PCs would form the official opposition with 40 seats, and the Liberals would not have enough seats to form an official party,

“An NDP government would be disastrous for those people we are trying so hard to protect, and that’s babies in the womb and their mothers,” said Jeff Gunnarson, vice president of Campaign Life Coalition.

“The NDP are the Liberals on steroids. They are absolutely ideologically committed to unfettered access to abortion, radical sex-ed, gender ideology,” he told LifeSiteNews.

“And don’t forget, Bob Rae’s NDP brought in an injunction against 18 pro-lifers back in 1994. They were officially a pro-abortion party long before Justin Trudeau forced the federal Liberals down that road. So it’s virtually certain any NDP MPP won’t vote for pro-life or pro-family policies.”

Moreover, several NDP candidates have come under scrutiny for what conservative pundit Brian Lilley has described as “crazy” views unearthed in past social media posts.

“If we end up with an NDP government in Ontario, a real possibility that grows by the day, we could have some real crazy MPs in government or cabinet,” wrote Lilley.

“From those that endorse the Leap Manifesto to those that think Remembrance Day is awful to an erotica poet who also appears to be a 9/11 truther, Horwath has them all.”

“We all know that you don’t post this kind of thing by accident. You don’t post Nazi messages on social media by mistake,” PC Party MPP Gila Martow said in a Friday press conference.

Horwath responded that she is “looking into this.”

Meanwhile, Dwayne Morgan, running for the NDP in Scarborough North, suggested in a 2010 tweet the U.S. government was behind the 9/11 terrorist attack, wrote Lilley.

Joel Harden, NDP candidate for Ottawa Centre, told an all-candidates meeting that he diverges from NDP policy and supports merging public and Catholic school boards, according to CBC.

Former boxer Fitz “The Whip” Vanderpool was on record with Campaign Life Coalition as against same-sex “marriage” as a municipal candidate, but is now for it as an NDP candidate for Kitchener South-Hespeler, reported the CBC.

Vanderpool is also under fire for not recalling he promoted the Female Oil Wrestling Federation, as reported in Canoe, prompting a derisive tweet from Toronto Sun’city editor Johathane Kingstone:

And then there’s Laura Kaminker, NDP candidate for Mississauga Center, who remarked on social media she won’t wear a poppy because it’s a “ritual of war glorification” but would sign up for “a war against Christmas,” the Toronto Star reported.

The PC Party candidate, social conservative Tanya Granic Allen, was running against Kaminker in that riding, at least until May 5.

That’s when Ford unceremoniously turfed Granic Allen from the party after the Liberals posted videos of her expressing views about abortion and sex-ed that Ford later described as “not respectful.”

As Gunnarson sees it, Ford’s decision has some connection to his sinking poll numbers.“Doug Ford is the author of his party’s dramatic slide in popularity,” Gunnarson contended. “The axing of Tanya Granic Allen was a ‘bozo eruption’ by Ford and his foolish minions, which contributed to this exodus of voters.”

Campaign Life has “anecdotal evidence of the many of our supporters who are backing off voting for the PCs at all,” he told LifeSiteNews.

“Ford can bring them back if he continues to publicly reiterate his pledge to repeal and replace the sex-ed curriculum, repeal laws that take away free speech and give conscience rights to health care workers.”

Vote for life and family, not party

In the final analysis, Ontario voters must put life and family issues before party affiliation when they go to the ballot box on June 7, Gunnarson said.

“We always encourage people to support the pro-life candidate in their riding, whatever the party. The NDP as per their party is radically pro-abortion, but there are pro-life Liberals, least one we know of, and that’s Joe Dickson,” he told LifeSiteNews.

“There are pro-life Tories, and pro-life ‘third-party’ candidates, running such parties as the Ontario Party, Trillium Party, and the Stop the New Sex-Ed Agenda Party, or independents,” Gunnarson said.

“If you aren’t sure where your candidate stands, go to the Campaign Life Coalition website. We’ve been canvassing candidates and putting together a comprehensive online voter’s guide. If you have more information you can share with us on a candidate, please let us know,” he said.

“Most importantly, get out and vote for life on June 7,” Gunnarson added. “As they say, that’s the only poll that really counts.”

To find out where Ontario candidates stands on pro-life and pro-family issues, go to Campaign Life Coalition here.