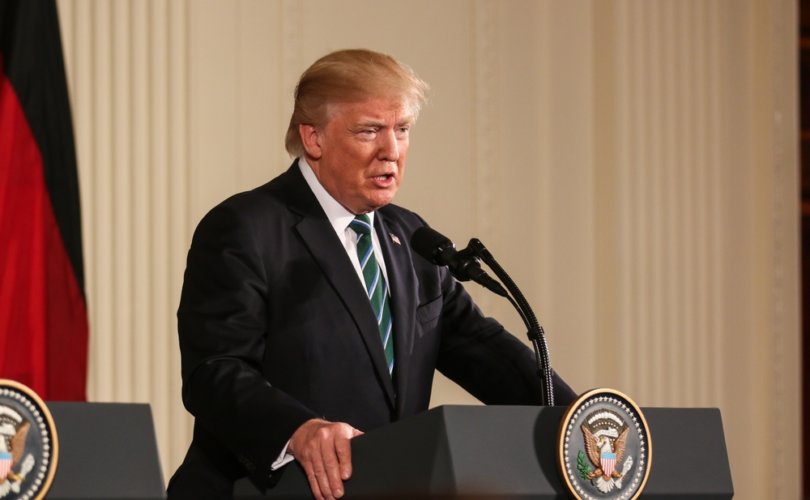 Legislation is currently pending in at least six states that would encourage public schools to offer elective courses on the Bible’s historical and literary significance. Backed by groups such as the Congressional Prayer Caucus Foundation, National Legal Foundation, and WallBuilders, the bills are meant to recognize that “the Bible is an integral part of our society and deserves a place in the classroom,” according to North Dakota GOP state Rep. Aaron McWilliams.

The president spoke out in favor of the push Monday, tweeting it was “great” to give students “the option of studying the Bible.”

Critics responded by attacking him from two angles: that Trump is an unserious champion of biblical principles, and that the policies run afoul of church-state separation.

On the first, critics invoked various examples such as Trump’s history of marital infidelity and comments suggesting he never asked God for forgiveness. Trump's secular, liberal, and salacious past alarmed many conservatives as well when he won the Republican presidential nomination, but since then most have been won over by his record of supporting life and defending religious liberty.

On the second, the so-called American Civil Liberties Union (ACLU) claims he’s endorsing a policy that would show unlawful favoritism to one faith at the expense of others. “[T]here’s nothing ‘great’ about legislation proposing Bible-study classes in our public schools,” ACLU senior staff attorney Heather Weaver wrote Tuesday. “Public schools are for education, not religious indoctrination. More often than not, public school Bible classes resemble Sunday school lessons and violate students’ and parents’ First Amendment rights.”

In fact, the First Amendment simply forbids Congress from making any laws “respecting an establishment of religion, or prohibiting the free exercise thereof” (requirements the Fourteenth Amendment has since been interpreted as extending to states). Religious education was common in the Founding era, with the Northwest Ordinance of 1787 calling for the establishment of schools specifically because “[r]eligion, morality, and knowledge” were “necessary to good government and the happiness of mankind.”

Supporters of the proposed courses stress that the courses are options that won’t be forced on any student, and argue that students of all faiths should have an understanding of how biblical principles shaped the thinking of America’s Founding Fathers.