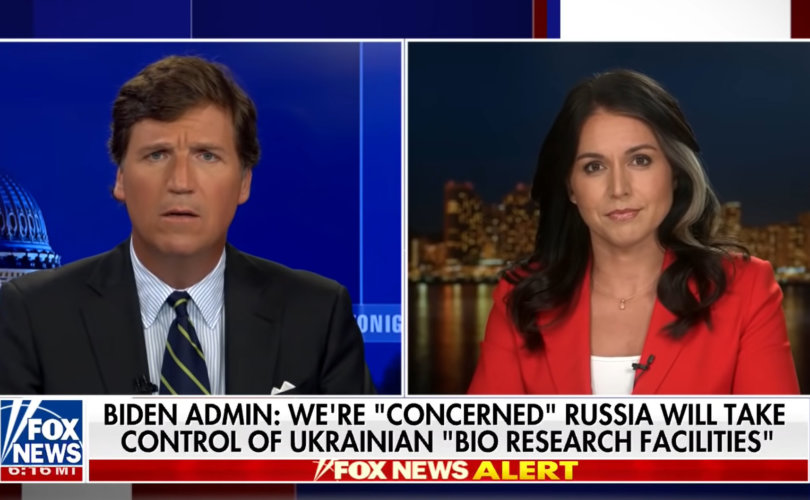 So has former Democratic Congresswoman Tulsi Gabbard, who appeared on Carlson’s show last week to discuss State Department official Victoria Nuland’s comments that there are “biological research facilities” in Ukraine.

“Their response to this, the fact that they are covering it up, the fact they aren’t doing really what needs to be done … we face a very real certainty that one or more of these labs will be compromised, will be breached,” Gabbard said.

“We could face another global crisis when you look at a pathogen that could be released, we just went through this with COVID,” Gabbard said. “They need to be shut down immediately.”

“Senator Romney, please provide evidence that what I said is untrue and treasonous,” the former congresswoman said in response on Twitter. “If you cannot, you should do the honorable thing: apologize and resign from the Senate,” she said. “Evidence of the existence of such biolabs, their vulnerability, and thus the need to take immediate action to secure them is beyond dispute.”

Senator Romney, please provide evidence that what I said is untrue and treasonous. If you cannot, you should do the honorable thing: apologize and resign from the Senate.

Labs containing pathogens such as those for Ebola could be attacked by Russia and weaponized. Biological weapons would be mechanisms created for the purposeful dispersal of diseases to kill people. “They generally consist of two parts – a weaponized agent and a delivery mechanism,” the United Nations explains.

The Fox News host “needs to be tried at The Hague as a disinformation agent in Putin’s war,” Democratic operative Alexandra Chalupa tweeted on March 14. The Hague is a city in Netherlands where the International Criminal Court is located.

.@TuckerCarlson needs to be tried at The Hague as a disinformation agent in Putin’s war. Carlson is a war criminal aiding and abetting a hostile enemy of the U.S. while thousands of American veterans are risking their lives helping Ukraine defend the free world from Putin.

“Carlson is a war criminal aiding and abetting a hostile enemy of the U.S. while thousands of American veterans are risking their lives helping Ukraine defend the free world from Putin,” she alleged.

Chalupa helped Ukrainian officials lobby the Obama-Biden White House for aid and also assisted in the promotion of the false narrative that Russia colluded with President Donald Trump’s 2016 campaign.

The U.S. government confirmed there are biolabs in Ukraine. But now anyone who says that out loud is accused of treason. pic.twitter.com/8s6UPhBoAL

Carlson responded to the controversies on his show Monday night. He said the the attacks on people discussing these issues is dangerous.

“It’s terrifying, and if we can’t respond to it [the existence of biolabs], because everyone is afraid of being called a tool of a foreign country, people who are trying their very hardest with the greatest level of sincerity to protect the United States, then we have lost the threat,” Carlson said. “Then we can’t lead the world, we can’t lead our own country if people like that are in charge.”