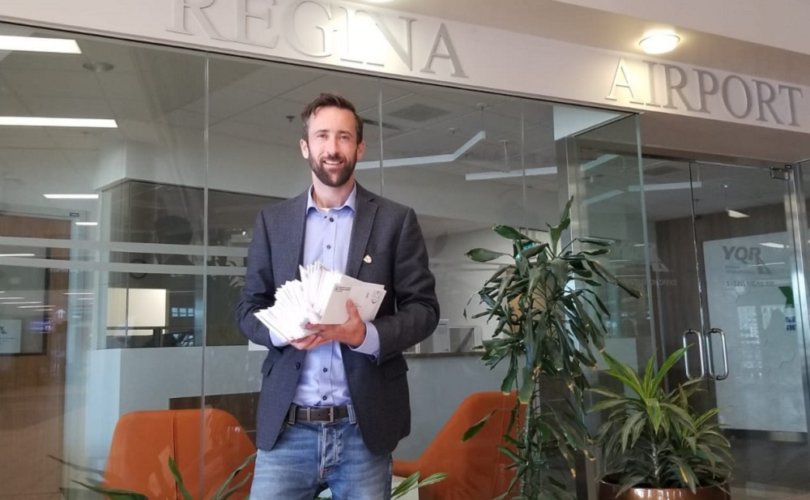 “It’d be ludicrous to withhold a critic role from Derek — and a massive betrayal,” said Jack Fonseca, the group’s director of political operations.

O’Toole owes his victory to the “enormous participation of social conservatives in the leadership race,” whose votes, after Sloan and pro-life contestant Leslyn Lewis were eliminated, went to O’Toole on the third ballot, the Campaign Life petition points out.

On Tuesday morning, Liberal M.P. Pam Damoff tweeted a letter advising O’Toole that if he didn’t expel Sloan, he would be condoning “racism, misogyny and bigotry.”

My statement on Derek Sloan and Erin O’Toole. pic.twitter.com/9jA5zfvShb

The Liberals followed up Wednesday with a petition asking O’Toole, a pro-abortion, pro-LGBT “rights” Catholic, to turf Sloan from caucus.

Erin O’Toole needs to show leadership by removing Conservative MP Derek Sloan from his caucus, and refusing to sign his nomination papers as a Conservative candidate.

The Liberal petition complained that during his leadership campaign, Sloan “compared women’s rights to control their own bodies to ‘slavery,’” “supported the cruel and discredited practice of anti-gay conversion therapy,” and “attacked the loyalties of Canada’s Chief Public Health Officer and accused her of working for China.”

Sloan fired back Friday in an email to supporters.

“Arrogance, and a contempt for democracy, come naturally to Liberals,” he said.

He characterized Damoff’s letter as “a political attack designed to divide our Party under its new leadership” made at “the behest of her party” who are “afraid of a united Conservative Party.”

Global News described his accomplishment as “bringing in only 14 percent of the vote,” but Maclean’s political analyst Jason Markusoff painted a different picture.

He listed Sloan — and social conservative leadership candidate Leslyn Lewis —  as “power players” in the party and among the “new cast of Tories to be reckoned with.”

Sloan’s “14 percent of points were good only for last place in 2020, but that score would have vaulted him ahead of the top social conservatives in the 2017 race, as well as the third-place candidate Erin O’Toole,” Markusoff reminded readers.

“His performance shows there is plenty of favour among the Conservative base for an aggressively right-wing social conservative. He might not get a prominent critic’s portfolio in O’Toole’s benches, but he and his constituency cannot be easily dismissed.”

Campaign Life, which supported Sloan and Lewis in the four-way contest, signed up 26,000-plus party members during the race, leading political insiders to predict that the social conservative vote would be critical in determining the next leader.

LifeSiteNews contacted O’Toole’s office for comment but did not hear back. However, when talking to reporters Tuesday, the leader of the Official Opposition declined to say whether he would take the Liberals’ advice on Sloan, Global News reported.

“Derek and I had some very stark differences, we had some areas of overlap with our concern about the Communist Party of China, I didn’t agree with some of the ways that he characterized some of those concerns, but certainly within a pandemic, within the race we were in, a lot of things were said,” O’Toole said.

“We’re united now, we’re going to talk together as a caucus soon,” he added.

Sloan said much the same to Global News.

Damoff took his comments out of context, Sloan added.

“The comments that I made are on the public record, and if you look at them, they’re quite thoughtful and articulate, and obviously certain comments were taken out of context, but everything I’ve said has been out in the public view, and I’ve been unapologetic about the views that I have,” he said.

Toronto lawyer Lewis, who captured 20.5 percent of the vote on first ballot and is now seeking a seat in Parliament, told CBC that Liberal Prime Minister Justin Trudeau “should worry about his own caucus” and that “Derek Sloan was elected and if … his constituents feel that they no longer want him, it’s up to them to vote him out.”

Fonseca says appointing Sloan to the Tory shadow cabinet is a “no-brainer” for O’Toole.

“Look, nobody can deny that Derek demonstrated natural leadership skills in the campaign, an ability to communicate complex policy ideas to the masses in an accessible manner, and that he has a spine of steel no Liberal can break. This is exactly the kind of thing future cabinet ministers should be made of,” he told LifeSiteNews.

By doing so, O’Toole would send a “much-needed message to social conservatives that they are a valued part of the O’Toole-led Conservative Party, something he promised repeatedly throughout the campaign,” said Fonseca.

Moreover, O’Toole vowed to be “a ruthless enemy of ‘cancel culture’” during his campaign, he added.

The Tory leader now has an opportunity to “put his money where his mouth is” by “throwing cold water on this Liberal MP’s request to cancel Derek Sloan.”