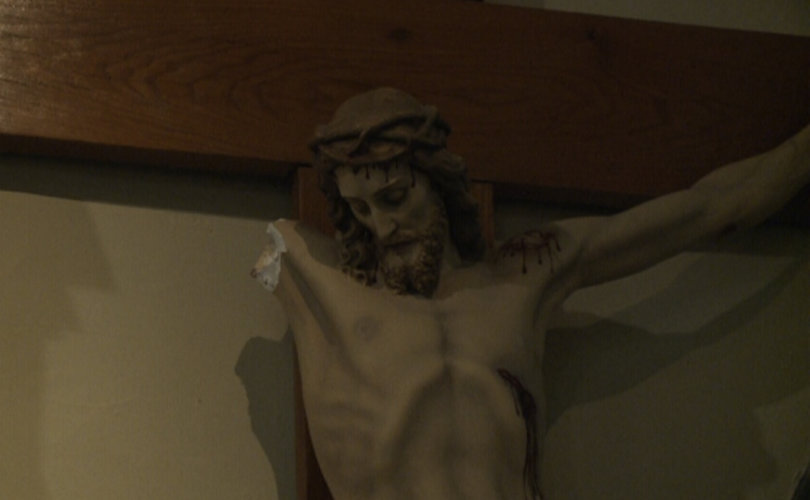 The arm of a corpus was torn off a crucifix at St. Patrick's Basilica in Ottawa on April 30.

OTTAWA, June 29, 2017 (LifeSiteNews) — A Conservative MP is raising the alarm that Justin Trudeau’s Liberal government is quietly expunging the “only section in the Criminal Code that directly protects the right of individuals to practise their religion.”

Saskatchewan MP David Anderson says Bill C-51, which according to a Liberal backgrounder is intended to clear obsolete, redundant or unconstitutional sections from the Criminal Code as well as strengthen sexual assault laws, contains a startling clause to drop Section 176.

“I think it’s just very strange that this would be removed,” the MP for Cypress Hills-Grasslands told LifeSiteNews.

“Particularly at this time when clergymen, ministers, imans seem to be under more threats than they’ve ever been in Canada, why would we be removing the only provision that we can find that actually protects both religious services, observances, and the clergymen?”

Moreover, “I understand the person who ran into the Basilica in Ottawa and smashed the statue of Jesus was actually charged under this provision,” Anderson pointed out.

Section 176 declares that anyone who “by force or threat” obstructs, interferes, or prevents by a minister or clergyman from “celebrating divine service or performing any other function in connection with his calling,” or assaults, “offers violence to him” or arrests him on a civil process when he is going or returning from performing a religious function is guilty of an indictable offence and could be jailed up to two years.

Similarly, anyone who “wilfully disturbs or interrupts an assemblage of persons met for religious worship or for a moral, social or benevolent purpose is guilty of an offence punishable on summary conviction.”

Likewise, anyone who “wilfully does anything that disturbs the order or solemnity of the meeting is guilty of an offence punishable on summary conviction.”

CTV reported June 12 that the Ottawa police have charged 52-year-old Katherine Spero with “breach of a judicial release and disturbing a religious worship” after an April 30 incident in which a screaming woman allegedly leapt onto the communion rail at St. Patrick’s Basilica just before 9 p.m. Mass and tore the right arm off the corpus of Christ on the crucifix.

According to an earlier CTV report, the woman allegedly then began flinging votive candles, “leaving a trail of broken glass and candle wax.”

In a similar incident, four men and three women “stormed” Mary Queen of the World Cathedral in Montreal on International Women’s Day 2000.

They “disrupted those who had come to worship by spray-painting slogans on the altar, turning over flowerpots, sticking sanitary pads, some soiled, to pictures and walls and throwing condoms around the cathedral sanctuary,” as Ian Hunter, professor emeritus of law at Western University, described in a editorial at the time.

Hunter deplored the fact that Montreal police chose to charge the seven individuals who wrought such havoc with unlawful assembly, “an offence shot through with difficulties of proof” that “fairly invites Charter defences.”

He contended they had indeed run afoul of Section 176, both by interrupting those assembled for religious worship and disrupting a clergyman in his duties, not to mention committing nuisance, theft, and mischief to property.

“[W]hat happened at Mary Queen of the World Cathedral was a despicable act that, in its hatred of religion, revealed a satanic streak not far below the surface of militant feminism,” Hunter wrote.

Phil Horgan, a Toronto lawyer and president of the Catholic Civil Rights League, also pointed to the Montreal disruption when questioning the Liberals planned erasure of Section 176.

“It’s unclear why this provision is in Bill C-51 the subject of the government’s streamlining, or to suggest that this provision lacks relevance in contemporary society,” he told LifeSiteNews.

“Where’s the pretence of some motivation to delete this section?”

Anderson, who is a Conservative critic for human rights, said Clause 14 of Bill C-51 “caught my attention because of my portfolio.”

He’s also a founding member of the International Panel of Parliamentarians for Freedom of Religion or Belief, whom he has worked with “for a number of years,” Anderson told LifeSiteNews.

“So these are the kind of things we try to keep an eye on and watch for.”

He has sent a letter to Justice Minister Jody Wilson-Raybould asking why the section is being repealed, and is asking others to do likewise.

The MP for Cypress Hills-Grasslands has also alerted the faith communities across Canada to this development and to press the Liberals for answers.

“This is the time in our society where it seems these clergymen are coming under increasing threat and for whatever reason the Liberals have decided to remove the protection,” he told LifeSiteNews.

“It doesn’t make any sense on the surface, so there must be something else going on here.”

The bill also mandates “the tabling of a Charter Statement for every new government bill introduced in Parliament to help Canadians understand the potential effects of new government on their Charter rights,” according to a Liberal press release.

Introduced June 6, Bill C-51 has already passed second reading vote and will be studied by the House of Commons justice committee when MPs return to Parliament in the fall.

LifeSiteNews contacted the Justice Department but did not hear back by deadline.

To express your concern, write: