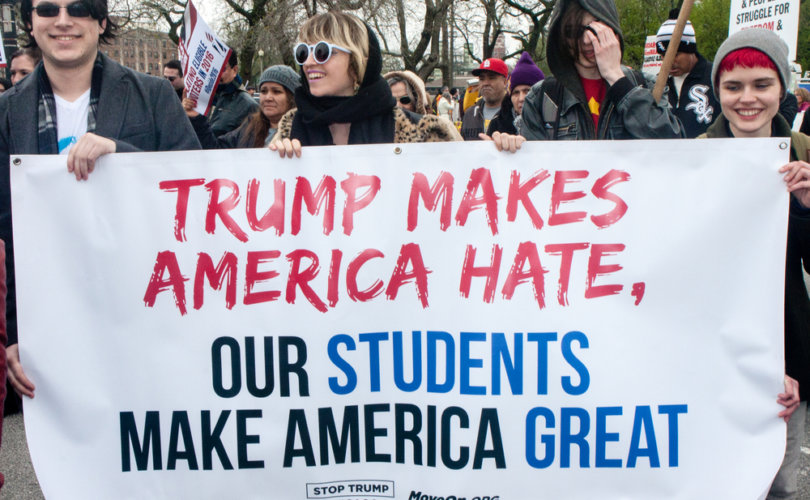 February 17, 2017 (LifeSiteNews) – A study of attempts to ban controversial speakers from American college campuses since 2000 indicates the perpetrators hail from left of the political spectrum twice as often as from the right.

Conservative media personality Milo Yiannopoulos alone has provoked not only half a dozen attempts at banning his speaking engagements at U.S. campus already this year, but two have triggered violence from left wingers, including a shooting.

A group of professors across the U.S. and Canada dedicated to intellectual freedom called The Heterodox Academy has examined data collected over the past 16 years by The Foundation for Individual Rights in Education (FIRE).

The group found 60 percent of the “disinvitation attempts” came from groups to the left politically of the speaker or guest and 30 percent came from the right of the individual. Another 10 percent fit neither category.

Conservative protesters were motivated mainly by guests with offensive criminal records, or their views on abortion or Israel.

The public issues “that have most often produced disinvitation attempts” were “racial issues, views on gender, views on immigration, views on Islam, and local politics.” When the researchers focused on those areas, it found more than 90 percent of the efforts to ban speakers came from the “left of the speaker.”

Additionally, more than 75 percent of disinvitation attempts over civil liberties and views on sexual orientation came from the “left of the speaker.”

The study found the attempts to ban speakers came equally from the left and right until 2010. After that, the left’s involvement grew steadily. Attempts from the right were successful more often in turning away the speaker.

However, when the disinvitation campaigns failed, the left was far more likely to attempt to disrupt the speech.

Moderate disruptions from the left across U.S. campuses outnumbered those from the right in 2016 by 27 to 3. “Substantial” disruptions such as throwing rocks, shouting threats and storming the stage came from the left 21 times in 2016 and only three times from conservatives.

Heterodox Academy and FIRE both believe that knowledge advances best when ideas can compete freely in a “marketplace of ideas,” as FIRE’s vision statement puts it. The vision statement adds that this “cannot happen properly when students or faculty members fear punishment for expressing views that might be unpopular with the public at large or disfavored by university administrators.”

The Heterodox Academy is particularly concerned with the threat to freedom of thought posed by the prevalence of left-wing thinking among university professors. Its website states that “In the 15 years between 1995 and 2010 the academy went from leaning left to being almost entirely on the left.”

Now 60 percent of professors classify themselves as of the far left or liberals. Fewer than 30 percent consider themselves as moderates and just over 10 percent told pollsters they were conservatives.

However, the situation is actually worse, since most of the conservative are in engineering and sciences.

“The percent conservative for the major humanities and social science departments is closer to 5 percent,” the Heterodox Academy states.

Heterodox Academy does not link its finding on left-wing intolerance of visiting speakers to the prevalence of left-wing professors. However, some of those commenting on the group’s website do so.