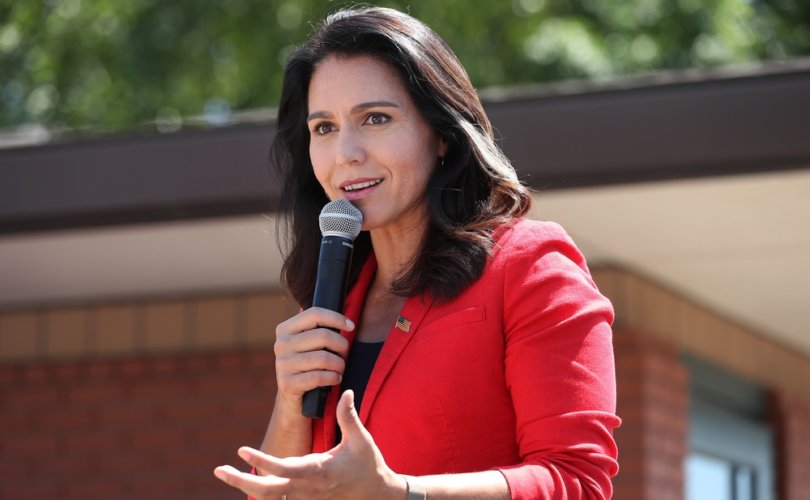 (LifeSiteNews) — Former U.S. Representative for Hawaii and 2020 presidential candidate Tulsi Gabbard announced Tuesday she is leaving the Democrat Party with a blistering attack on her former home, which has elicited excitement among her fans, skepticism among her detractors, and speculation as to her future political ambitions.

“I can no longer remain in today’s Democratic Party that is under the complete control of an elitist cabal of warmongers who are driven by cowardly wokeness, who divide us by racializing every issue and stoking anti-white racism, who actively work to undermine our God-given freedoms enshrined in our Constitution, are hostile to people of faith and spirituality, who demonize the police but protect criminals at the expense of law-abiding Americans, who believe in open borders, weaponize the national security state to go after political opponents, and above all, are dragging us ever closer to nuclear war,” Gabbard declared in a social media post launching her new web show:

A vocal critic of her party, Gabbard has earned the affection of some conservatives for her independence from Democrat orthodoxy, including on issues such as third-trimester abortions, women’s sports, social media censorship, and transitioning minors.

She is not a centrist, however; she voted in lockstep with the abortion and LGBT lobbies for most of her House tenure, advocated codifying abortion “rights” in federal law prior to the third trimester, favors decriminalizing prostitution, and endorsed socialist Bernie Sanders, arguably the furthest-left option on all the domestic policy issues her statement mentions, for president in 2016.

As indicted by her Tuesday statement’s references to “warmongers” and the ‘national security state,” a key part of Gabbard’s right-of-center appeal stems from her common ground with isolationist and anti-interventionist sentiments that have long dominated the libertarian movement and for years have grown in popularity among more populist factions of conservatism.

Love this! The Democratic Party is no longer a place for free thinkers of any stripe.

Stop what you’re doing and watch this https://t.co/1ppECQKl5T

Others counseled wariness, however:

Tulsi is not now, nor has ever claimed to be a conservative. I blame much of conservative media who love to invite progressives on to trash the left w/o debate. like the lionization of Bill Maher every time he says something that doesn’t completely adhere to DNC talking points. https://t.co/lJnJ3d3x4R

Really don’t trust Tulsi. She can be close on lots of issues and they way off on an important one. She needs much better aim 🎯 before I care what she says. https://t.co/oAn3AtJJ6A

I predicted this when she decided to not run again. She's playing a long game.

Yeah, like I've told others, she's more like the Dems I grew up with. And like many of those Dems, she being pushed out as the party has veered leftward and become more intolerant of the "big tent" notion that it had. pic.twitter.com/bMsO7ELxvS

Gabbard’s name has been floated as a potential future presidential candidate or running mate for former President Donald Trump, with some speculating that leaving the Democrat Party would be a necessary precursor to such a move.